Gold & Silver: Calm before the Storm

The FOMC will begin its two-day meeting today to discuss their next intention with regards to the scale as well as the timeline on a possible tapering. Economists expect the recent swathe of positive economic data could encourage many Fed officials to push for tapering as early as September 2013. On his last official speech, Fed chairman remains accommodative and maintain that tapering on QE is data dependant. He has also assured the market not to panic as low interest rate will stay for as long as needed. With the beginning of a new month, there are various economic data that could affect how early as well as how big the tapering could be. Speculators and investors are on tenterhook as many stays on the side line until a clear indication is given.

Gold is trading in a tight range after achieving a three week rally in price. The low at $ 1180 has set the motion for a corrective rebound and short covering which helped gold prices higher. In addition, it gained strong support from China continued physical demand and the weakness in US dollar index has also added strength. Technically, gold remains in a bear market and TD securities analyst continue to see this as a corrective move where more downside is to be expected. Elliott wave analysts counted that the major trend is to the downside and the rebound is a corrective a-b-c move. With the current gold prices stalling and faced strong resistance at $ 1347 area, some analysts assumed that the correction is done and the major trend will resume. They also mentioned the following:
“The July recovery has unfolded in a well-defined channel, which is a potential bear flag. A break below the base of the channel (currently 1289.90) is required to signal a renewed leg lower.”

We remain vigilant that the US dollar index has suffered badly and could well retest the daily 200 DMA target of 81.40 before a rebound could take place. USD bulls have shy away and profit taking from previous established long positions has greatly reduced. Investors remain interested to bid the dollar higher and maintain its uptrend resumption as long as the Federal Reserve is committed to taper. We felt that as long as gold continue to trade above $ 1300 or even a retest of $ 1270 - the bullish uptrend line can sustain. As long as gold could maintain this run and failed to break below $ 1200, we will make the call that a bottom at $ 1180 is made.

Given the setup for this week, gold look poised to trade in range after breaking higher above $ 1300 area with resistance at $ 1347. It managed to hold on to most of its gain made after bout of short covering and major repositioning ahead of key risk events. The recent price action indicates that investors’ sentiment has changed to a neutral stance after months of selling. A slowdown in ETFs outflow suggests that sellers are exhausted and a consolidation is setting in. Hedge fund managers are increasing their bets on higher gold prices on the assumption that the Federal Reserve may have to do more to prop the ailing economy. In addition, a slowdown in China economy may encourage government officials to revive easy monetary policy to avoid hard landing. The Eurozone economy faced bigger uncertainty and this week ECB press conference may shed more lights into the possibility of reducing interest rate to below zero. 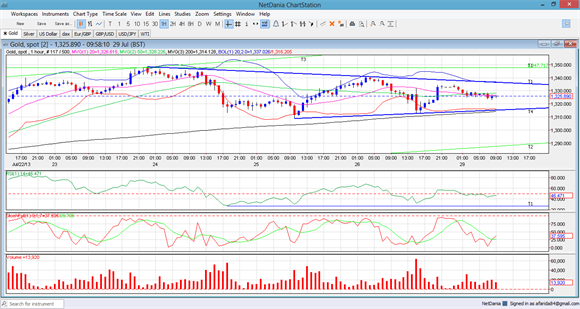 US dollar weakness and strength in the gold market has allowed silver to move higher but it remains trapped below $ 20.00 area. UBS latest CFTC report states that silver net longs were cut back by 3.3 moz on the back of shorts being initiated. Meanwhile, ETFs investors continue to see some interest but the main concern remain on the long term technical view on the white metal. The daily MACD has risen but continue to trade in negative territory and prices have tried to break above the upper downtrend line for three times and failed. RSI and stochastic has also shown downside momentum - suggesting more consolidation and downside risk to come next week. 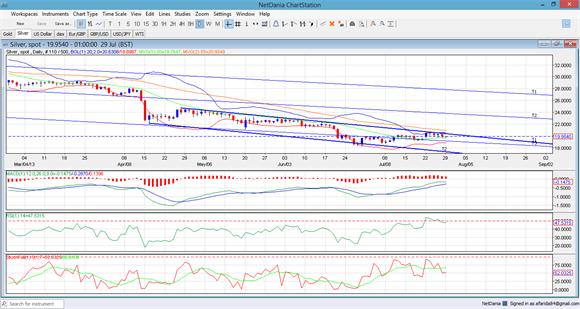