Gold remain caged between $ 1660 to $ 1690 area due to the lack of direction and catalyst. Mixed economic data from the US and Europe sent a rather confusing picture for traders to react with. Short term traders reacted well by buying on the back of poor economic news and quickly offload via profit taking before they get caught out by another surprising good data.

The fundamental remains the same as the Fed maintain to expand their balance sheet and promote low interest rate to stimulate the economy. Other countries have followed suit with money printing programs that is supportive on gold prices. Central banks remain the primary buyer on gold bullion while smart investors are diversifying into silver bars as well. Long term investors are sceptical that the economy is growing at a pace that was proclaimed by politicians. With the current rate of currency debasement, it is only a matter of time before we see bullion prices breaking out of this tight range to head higher.

The ECB is expected to keep its interest rate at 0.75% despite the recent optimistic economic data. Mr. Draghi may play a cautious card, arguing that these accommodative policies are in place so as to encourage governments to resolve the long-running crisis via structural reforms. Euro sceptics warned that repayment of the LTRO money is not necessarily good news. They argued banks were choosing to repay because demand for credit remains weak.

Meanwhile, Asian markets are setting up for a quiet week with Chinese Lunar New Year upon us. Stock markets are closing on the 11th to 15th of February to celebrate and welcome the year of water snake.

Short Term:
Gold prices surged higher this morning and holding at $ 1673. We expect a slowdown in physical demand from Asia as we approach the Chinese Lunar New Year in the next 2 weeks. According to historical data from the last two years, gold prices tend to dip lower during the festive season before rising higher. Traders could see more consolidation on prices as it trades within the $ 1660 to $ 1690 area. Yesterday’s price action indicates that support is found at $ 1660 and gold broke higher to overcome the 38.2% retracement level at $ 1669 (basis on January low). Buying pressure prevail despite a stronger US dollar index which might suggest safe haven appeal.

Medium Term:
Gold tested support at $ 1661 - completing a triangle bottom before buying pressure pushed it to $ 1671. Traders remain sceptical and buying interest is generally small due to the lack of direction. The yellow metal has support at previous low of $ 1652 and January low at $ 1625. As per our commentary, we look to buy only if gold price crossed $ 1686 and January high of $ 1697. 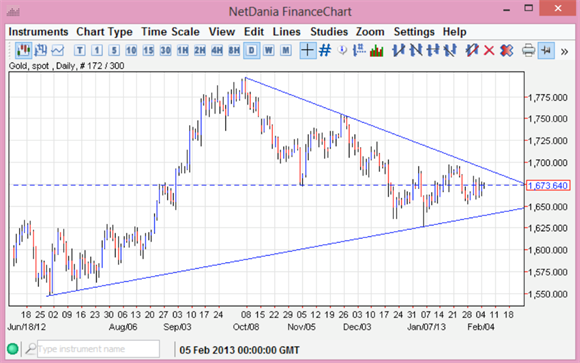 Short Term:
Yesterday, silver consolidated after a short rally and found support at $ 31.40. The current price is consolidating at $ 31.70 and still shy of breaking the downtrend line. The 1 hour chart paints a bullish indication that selling pressure is overcome with dip buyers at that level. Therefore, the short term support lies on $ 31.317 and $ 31.12. Meanwhile, silver has got several resistances to tackle before it has the ability to target higher numbers. Short term resistance stands at $ 32.144 and $ 32.279 respectively. We are potentially looking at an ascending triangle pattern that could be bullish for silver in the next few weeks.

Medium Term:
We would like remind our readers that silver is still range trading between $ 31.00 to $ 32.00 areas. Expect more volatile trading as we draw closer to this Thursday ECB’s interest rate decision as well as the on-going allegations of PM Rajoy and the world oldest banks in Italy. Look to buy silver should it cross $ 32.00 level again as it indicate that investors are eroding the resistance levels. 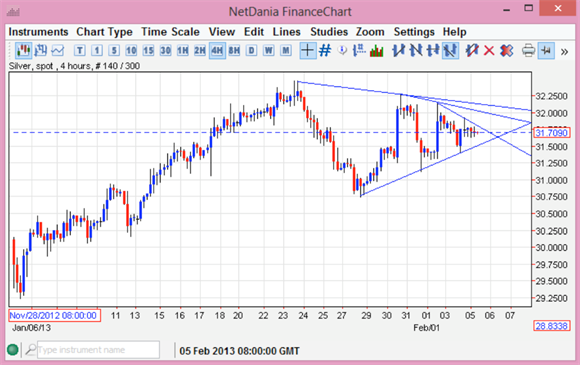