The very first thing that we would like to highlight is a possible reversal in the weekly outlook on both gold and silver charts. Technically, both metals posted a gravestone doji on the weekly chart after an impressive run up. Followers of candlestick will argue such patterns as an early warning signal. Elliott wave theorists argued otherwise, as they see further upside and this is only a corrective wave 4 before uptrend resumption continues to target the upper channel line (see chart below). Both argument stands as a valid scenario but it all depends on the price action.

Geopolitical tension has eased and thus the corrective rally is stalling. Next week Federal Reserve meeting is an important landmark where tapering will happen and the question now is how much to taper. Rumours among the media agencies and analyst are as good as anyone’s guess - with a range of $ 15 billion reduction to as much as $ 35 billion. The build-up to tapering week will garner some downside interest and it will be a healthy pullback for both metals. Looking ahead though, Syria will continue to be a problem child and such scenario will provide support on safe haven assets. We are making the case that in the short term we see continue pressure on the downside on gold and silver but both will find support before resuming higher. Both market seems to setup for “sell the rumour, buy the fact” scenario.

Weekly Chart
Gold needs to take out previous high of $ 1430 and break higher to have wave 5 completed and only a break below $ 1340 will reignite additional bearish scenario. The upside seems rather limited after the break above $ 1430 with various resistance levels at $ 1455 (upper channel line and possibly top range of the Bollinger band that will act as resistance). It could mark the end of the corrective wave and we foresee a pullback should gold try to take out $ 1480 level. With such scenario, the weekly chart paints such possibility for gold to try $ 1455 level before resuming lower. Otherwise, the high at $ 1430 level may have been the top and bearish resumption could play out from here but it will be ideal for another run up before pulling back. RBC chief analysts George Davis made similar arguments “using short term rallies to the $ 1427 to $ 1487 level as a selling opportunity with stop loss at $ 1530 to target a return move to $ 1275 and $ 1200 eventually”. 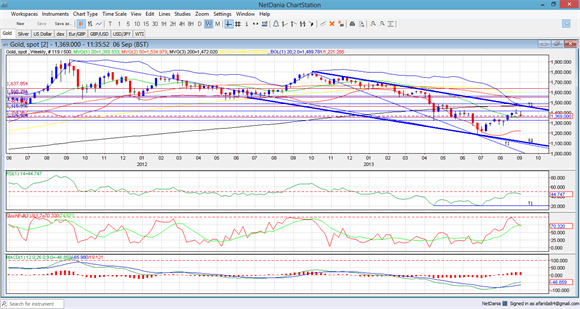 Weekly Chart
Silver corrective rally (based on the weekly chart) stop at the top of the falling Bollinger band. Current setup seems to indicate that the Bollinger band is trying to converge and the ideal midpoint for price action lies above $ 21 and below $ 22.50 level before a breakout ensue. The 10 DMA has crossed above the 20 DMA but remains fragile with the RSI trading below the 50 level and going flat (proving that the 50 level is resistance for now). Other indicators such as the MACD has crossed higher but still in negative territory. The current corrective rally has retraced below the 23.6% retracement from its low and next support stands at 38.2% retracement at $ 22.50 followed by a possible retest at $ 21.80. Should it break below $ 21.80, a revisit to $ 18.90 is in the bag followed by a possible new low for the year. 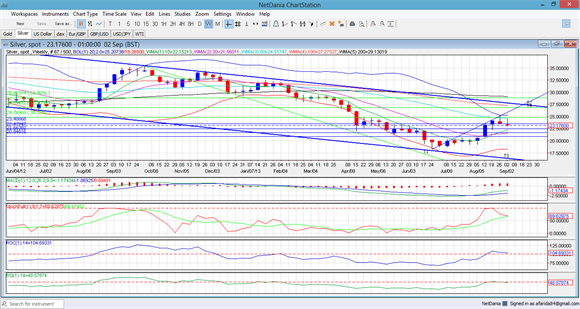 Traders Notes: Buy if break $ 24.75 and add on the break of previous high. Short trade has hit stop that was moved below breakeven. New short if it breaks and close below $ 23.00.