When a bear market reaches an extreme, a certain saturation point will determine a rather one sided mentality that blind investors and affect their overall trading decision. Selling pressure dominated the precious metals market in both gold and silver throughout 2013. Pundits have waged on lower low on both metals simply because the overall global economy is recovering at such a pace that safe haven assets is no longer necessary. Federal Reserve intention to taper in the near future also plays a big role in degrading the overall value. The latest round of negative sentiment falls on Central Banks recent action in selling the yellow metal. In addition, the US dollars managed to break higher which add selling pressure. However, we felt that gold has room to move higher as we continue to the end of the year. Our argument has not changed as we see further delay in tapering and continued monetary stance by various central banks.

As we are about to enter 2014, we will come across various projections on the global economy. The US debt ceiling has been extended till next year and could the same political fallout happen again in the early 2014? What will the economy look like with a stronger dollar? Trouble in the Middle East set to go away? Equity market continues to balloon and still no inflation? What 2014 will bring is not answer but challenges and the overall review by world leaders as they continue to provide accommodative policies to battle through a recovering yet fragile economy.

Weekly Chart
As October concludes, we witness a doji candlestick formation as sellers and buyers tried to dominate. MACD line is rolling higher and could potentially cross higher to meet the signal line. A crossover and above the signal line could be an early indication that gold is ready to resume higher. The stochastic remains in the weak zone and only a sustained move higher to regain $ 1525 level will allow the bull trend to resume. Only a break below $ 1170 will suggest that the bull trend from 2000 has ended. We continue to argue that a double bottom formation could play out in such a way that gold find solid footing for a potential run higher.

Weekly gold chart paint a slightly negative picture as gold tries to find support after its previous test of $ 1360 area. Last week strong dollar, rising equity market and end of month profit taking pushed gold to a low of $ 1306. Should the yellow metal found support above $ 1251 in the next few weeks, we could see higher prices with possible resistance at $ 1361 to start with followed by $ 1378 and $ 1400. We also favoured certain positioning by hedge funds and other institution investors given rising uncertainty leading up to US debt ceiling negotiation. A break above the downtrend channel line at $ 1400 could indicate further momentum to retest $ 1500 area in the coming weeks. Selling gold has been a one-sided trade and there are enough room for investors to wage higher prices.
At this stage, we are reluctant to suggest that gold will now recover and move higher to previous high of $ 1800 - $ 1900 level as we continue to trade in a bear market. The MACD line continues to thread in the negative zone above the signal line. Meanwhile, the stochastic fast line is attempting to breakout above the slow line which could indicate a possible bullish run from here. This could be a build-up for such a move but we give it a small possibility at this stage. 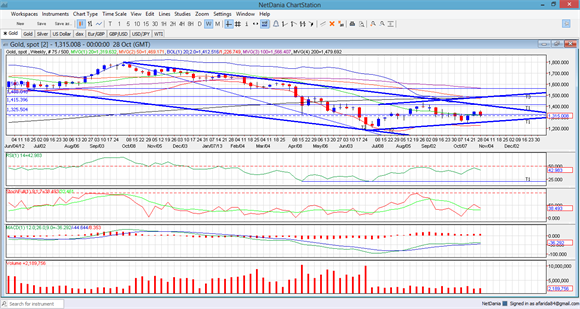 Weekly Chart
We continue to sit by our argument last week that “Daily chart shows a potential run up to retest the channel line but weekly chart shows that it is still trending in the bigger downtrend channel that started since May 2011.” We felt that silver prices could pull back a little lower before it can continue to advance higher. Only if it break and close above $ 23.05, then more upside can be considered at this stage. At the moment, silver prices look set to retest support at $ 21.00 area and if that fails then we see lower prices.

Once again, we are not confident to be bullish as silver continue to trade in a bear market. However, we feel that a bottom could be in the making as the Bollinger band is tightening up for a possible breakout. Certainly the selling have throughout the past few months could be receding. Only a break above $ 23.65 will give the bulls more confident to push higher to the upper channel line at $ 25.85 area. 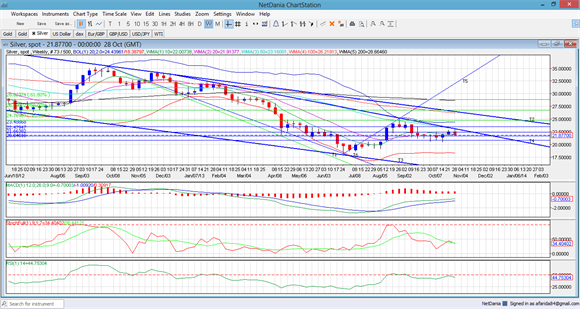