Last week, both gold and silver started on the back of a bad NFP data that pushed the price on the metals higher. We were sceptical of such move as both failed to break previous high, thus the cautioned not to buy on such rally. Break below $ 1350 took a while and the market setup seems to favour flushing out weak long hands as we draw closer to the FOMC meeting. Tapering effect continue to weaken gold and silver while the equity market continue to trade higher (divergence?). Mr Bernanke replacement is likely to be Larry Summers (Obama’s favourite) which add further negativity on a hawkish Federal Reserve. Cooled down tension in Syria has also dampened the reason to hold on safe haven assets. However, we are sceptical that all of the above seems to indicate a possible “sell the rumour, buy the fact” scenario on the safe haven assets. It remains difficult to see that the global economy has recovered to the extent that reduction on money printing is viable. We see tapering as a one-off experiment and the Fed left the door wide open to further QE if the data is bad. A potential big shock for this week is to have a small or no taper with a possible rising tension in Syria.

Weekly Chart
Breakdown on the Elliott wave count ended the corrective rally on gold price. We have warned in our previous weekly update the different scenarios - “Otherwise, the high at $ 1430 level may have been the top and bearish resumption could play out from here but it will be ideal for another run up before pulling back”. The upside resistance now stands at $ 1430 and the creation of lower high and lower low confirm that gold is resuming lower as traders lock in profit ahead of the up and coming FOMC meeting that could see the beginning to tapering. Over the week, talks of Larry Summers getting the position instead of Janet Yellen seem to add pressure on gold price. The market sees Mr Summer as the likely candidate who will push on more monetary tightening instead of the dovish Miss Yellen. Syria has also agreed to hand over chemical weapon and the tension in the Middle East has cooled down. Looking ahead, the weekly chart posted an ‘Evening Star’ candlestick that marks the start of a reversal trend and in this particular case - gold set to head lower. Break below $ 1300 open the door to a retest of $ 1275 area and break below that could see $ 1210 and $ 1180 again. The lack of fresh buying and previous short covering from short sellers has left enough rooms for new shorts to enter the market. Take note that gold is still trading in a Bear market and the larger trend will continue to dominate to the downside resumption. The only exception is if the Syria war escalates further and/or FOMC failed to taper or taper a small token. However, the possibility of the opposite is slim at the moment. Trade cautiously and it is better to go in flat before the FOMC meeting. 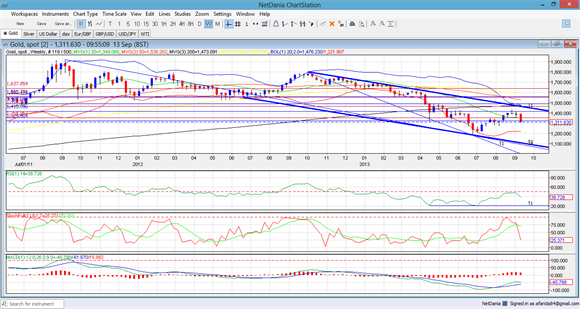 Weekly Chart
The price action on silver is subject on gold doing well but as we have mentioned on our daily commentary, alarm was raised when it failed to move higher on the back of a positive economic data from China. This corrective rally has come to an end and the downtrend resume with a potential target of $ 20.60. Previous low could be the next target should the support at $ 20.60 breaks. We went bearish on our last weekly update and both price target that we mentioned were achieved - “The current corrective rally has retraced below the 23.6% retracement from its low and next support stands at 38.2% retracement at $ 22.50 followed by a possible retest at $ 21.80. Should it break below $ 21.80, a revisit to $ 18.90 is in the bag followed by a possible new low for the year.” 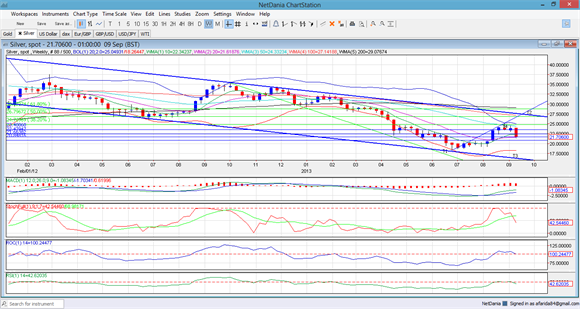