There are many unanswered questions but we are reaching the last quarter of an eventful 2013. From the beginning of the year, the precious metal market seen sentiment sagged and wave of selling started to take full control. Heavy liquidation happened on April 2013 when gold broke below previous support at $ 1525 level. Gold Bull cried foul but the damage was done with a low of $ 1180. Stock market cheered as politicians and central banks boast the return of “good times” and better economic numbers are expected. Alas, if only the trading world could be so straight forward but it is never short of surprises and volatility.

Fed officials showed sign of dissent on the accommodative stance and continued Quantitative Easing after several positive economic data. They then made a clear statement to reduce the amount of easing - coined the word as “taper”. It took many attempts by other officials that tapering is a positive sign towards the US economy. Stock market soared to new high and the cycle of euphoria started to take over despite questionable economic data at certain times. Sceptics raised their doubt if true economic recovery is truly in the making. The Federal Reserve showed sign of worry with regards to asset and commodities inflation bubble. Reigning in some of the hot money is correct but developing economies suffered as a result. We have yet seen any tapering and the Federal Reserve may have to delay such process after a difficult US debt ceiling which threatened the very foundation of any recovery.

It makes grim reading but a quote from Macquarie Commodities Research stated that - “commodities which have performed better tend to owe more to policy moves and unforeseen events than underlying fundamentals. In the past 10 months, we have seen many unprecedented events as we enter into the new normal. Politicians and economists should not use the word recovery too lightly as the world economy continue to battle with abundant supply and a dwindling demand.

Weekly Chart
A bullish candlestick as we enter the second half of October. Despite heavy selling for the last two months, the short sellers are giving way to take some profit. US debt ceiling is considered solved for now but given how fragile the economy, talks of tapering has died down for now. Buyers were found to soak up the excess supply from $ 1252 onwards. It is critical that gold stay above that price and start to gain positive momentum. Elliott wave theorists argued that if prices break above $ 1340 and continue to target $ 1375, an extension of wave C could take gold as high as $ 1400 area (assuming that the move from July was wave A and the move down from end of August as wave B.
At this stage, we are reluctant to suggest that gold will now recover and move higher to previous high of $ 1800 - $ 1900 level as we continue to trade in a bear market. The MACD line continues to thread in the negative zone above the signal line. Meanwhile, the stochastic fast line is attempting to breakout above the slow line which could indicate a possible bullish run from here. This could be a build-up for such a move but we give it a small possibility at this stage. 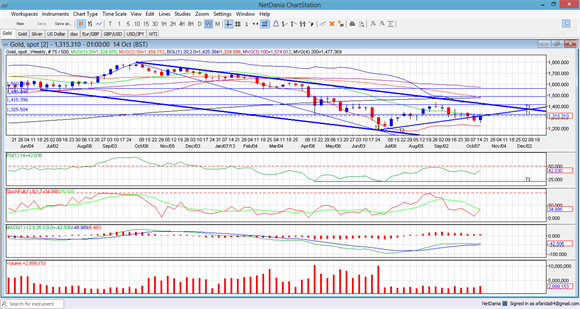 Weekly Chart
Silver put up a brave fight after it bounced from previous low of $ 20.50 to close the week with a bullish hammer. Daily chart shows a potential run up to retest the channel line but weekly chart shows that it is still trending in the bigger downtrend channel that started since May 2011. As per our last commentary, silver price action is subject on gold doing well. There are signs that China economic situation is picking up for the better which could lend support.
Once again, we are not confident to be bullish as silver continue to trade in a bear market. However, we feel that a bottom could be in the making as the Bollinger band is tightening up for a possible breakout. Certainly the selling have throughout the past few months could be receding. Only a break above $ 23.65 will give the bulls more confident to push higher to the upper channel line at $ 25.85 area. 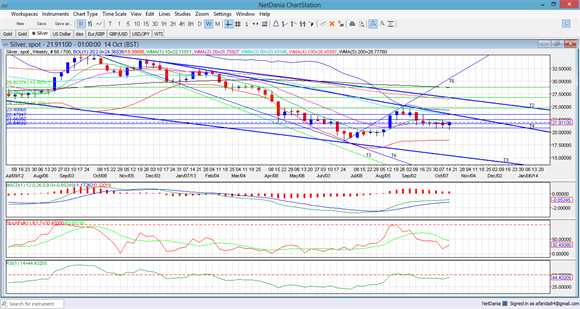