Previous reports from top banks and brokers placed a strong negative message on both gold and silver. Recently, they are reversing their argument but warned that the upside momentum in both metals will soon falter. Most were making loud noises that bearish sentiment will prevail and proclaimed that both metals will revisit previous low. Their argument is based on the fact that the Federal Reserve will start tapering this year, a much stronger rally on the US dollars and a smooth negotiation on US debt ceiling. Short selling escalated with better US economic data which aid the idea on shorting both metals after their previous high at $ 1420 and $ 25.20 level. Potential withdrawal on monetary stimulus has also dampened the mood on taking a long position on the yellow metal. However, there is certainly a change in sentiment among investors during the US debt ceiling negotiations. Gold failed to rally higher when on-going negotiation took place. Instead, it took a hard turn to break below $ 1278 and to a low of $ 1251 where bargain hunters enter the market.

With weaker US dollars and potentially no “tapering” this year, gold bulls muscled in to push short sellers to unwind their positions. Shorts covered and allowed gold to rally more than $ 100 in just 2 weeks. As previously argued, “We have yet seen any tapering and the Federal Reserve may have to delay such process after a difficult US debt ceiling which threatened the very foundation of any recovery.” Once again, we stressed the fact that the global economy remains fragile and stood on the brink of collapse should there be any further economic calamity. Easy monetary policy is needed for the foreseeable future and “Politicians and economists should not use the word recovery too lightly as the world economy continue to battle with abundant supply and a dwindling demand.”

Weekly Chart
The monthly chart caught our attention with a bullish hammer candlestick which suggests strong buying interest. In addition, the MACD line is rolling over and could potentially cross higher to meet the signal line. A crossover and above the signal line could be an early indication that gold is ready to resume higher. The stochastic remains in the weak zone and only a sustained move higher to regain $ 1525 level will allow the bull trend to resume.

Meanwhile, the weekly chart continue to paint a bullish setup but with several strong resistance on the way. First, the RSI will need to break above the 50 level to indicate further upside momentum. Secondly, there is plenty of room for the stochastic fast line to move higher. Thirdly, the MACD line continues to trade above the signal line and that may help the current rally to continue for a little longer. Resistance comes in at $ 1356, $ 1378 and $ 1400 to begin with. We maintain our view that “Elliott wave theorists argued that if prices break above $ 1340 and continue to target $ 1375, an extension of wave C could take gold as high as $ 1400 area (assuming that the move from July was wave A and the move down from end of August as wave B.”

At this stage, we are reluctant to suggest that gold will now recover and move higher to previous high of $ 1800 - $ 1900 level as we continue to trade in a bear market. The MACD line continues to thread in the negative zone above the signal line. Meanwhile, the stochastic fast line is attempting to breakout above the slow line which could indicate a possible bullish run from here. This could be a build-up for such a move but we give it a small possibility at this stage. 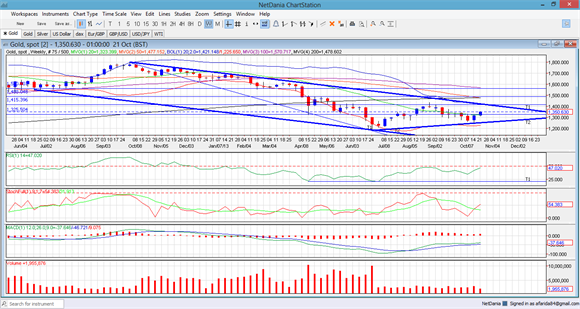 Weekly Chart
Given the rally in gold prices, silver prices managed to keep most of its gain staying above $ 22.50 level. We continue to sit by our argument last week that “Daily chart shows a potential run up to retest the channel line but weekly chart shows that it is still trending in the bigger downtrend channel that started since May 2011.” We felt that silver prices could pull back a little lower before continue to advance higher. Only if it break and close above $ 23.05, then more upside can be considered at this stage.

Once again, we are not confident to be bullish as silver continue to trade in a bear market. However, we feel that a bottom could be in the making as the Bollinger band is tightening up for a possible breakout. Certainly the selling have throughout the past few months could be receding. Only a break above $ 23.65 will give the bulls more confident to push higher to the upper channel line at $ 25.85 area. 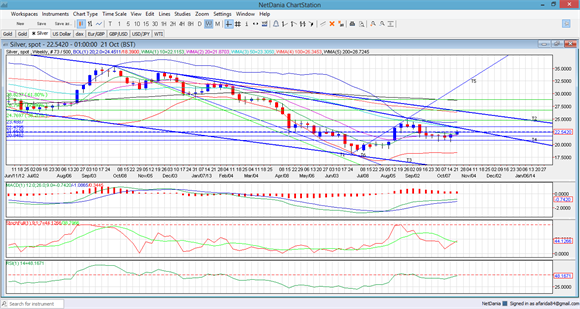