Talk of tapering cast a shadow over the market place but the Federal Reserve decision has left many gasping and run for cover. 2 to 3 weeks earlier, emerging market has suffered on the prospect of less accommodative stance. Meanwhile, the developed economy shrugged taper talk as investors piled into the equity market. Safe haven assets suffered greatly with gold losing $ 140 from its previous high of $ 1434 area. There were few signs that say no taper but we admit the dollar index was weak throughout the taper process. Investors who are long US and Europe equity market saw huge rise as their bet paid off. Analysts argued that developed economy equity market proved far stronger and with taper priced in, the rally will continue. We remain rather sceptical with the rally in the equity market purely due to the lack of evidence that the market has recovered to justify the all-time high scenario. The only explanation that supports such rally is the easy monetary policy lead by powerful central banks to continue the devaluation of their currency (fuelling currency war), accommodative stance as they see fragile recovery and concern about the high rate of unemployment that has beset the economy for the last 5 years. Therefore, we wonder what is there to cheer about if the economy remains so fragile.

Weekly Chart
You might be wondering why it is so easy to remain bearish in gold. Technical analysts study price action, watching for trends and historical patterns that could shed some clue as to the next move. The price action in the weekly chart remains bearish given that it is still within the larger downtrend channel. Only a clear break above $ 1438 will allow us to consider that the bottom is set at $ 1180 for a good while. Therefore, it is easy to then indicate that prices will continue in this downtrend channel line with a clear potential for it to retest previous low or even take that out and target the lower channel line at $ 1050 per ounce. Meanwhile, the Bollinger band is starting to converge and support can be seen at $ 1237 (lower Bollinger band line) as a potential target. The MACD remains in negative territory even though MACD line crossed above the signal line. Volume on the corrective upside rally has not been supportive either, indicating the lack of commitment to break higher. We are also concerned that a Head and Shoulder formation could play out here - neckline potentially at $ 1278 level. Despite all that, we cannot discount the fact that gold bulls will have a go to take out previous resistance level at $ 1434 and if that is done then we could see a higher gold price. With debt ceiling discussion as well as no tapering until December 2013, there is sufficient time for a push higher. 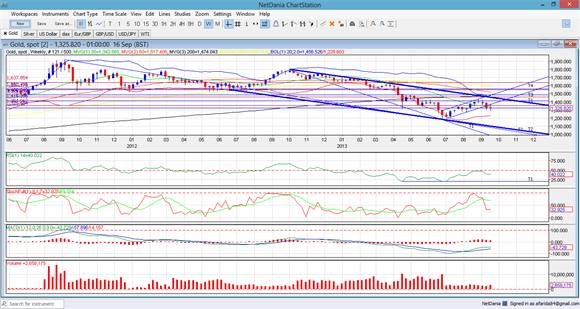 Weekly Chart
Our downtrend bias remains given that the white metal has failed to rally higher on the back of supportive conditions such as weaker US dollars and positive economic data. Recent price action suggests that traders are cautiously trading in the Fibonacci range from previous low to the high of $ 25.25 level. Support remains at $ 21.84 to invalidate the rally and current price action seems vulnerable to head that way. A break below that, we can revisit $ 18.50 area as the weekly technical chart favour more pullback. The MACD histogram could start to head lower while the RSI at 50 areas might act as resistance again. In addition, the upper Bollinger band has dropped to $ 24.75 level and that could cap any future rally.