In our previous Gold & Silver commentary titled “Technically Deflated”, we mentioned how the metals are facing an identity crisis and raised several question about its long and short term standing. This time, we would like to quickly discuss the fundamental aspect that could be pivotal to bullion prices in 2013.

Fundamentally, the bullion industry is still well supported by the on-going economy uncertainty. Ever since the 2008 financial crisis, USA has been the leader in quantitative easing and extremely low interest rate. These new economic policies are experimental ideas, done in the name of minimising the collateral damage of huge borrowing and budget deficit which still exist. Meanwhile, the Eurozone crisis managed to scrap through intact after a Mario Draghi’s comment that “he will do anything to save the Eurozone economy”.

2008 economy crisis sent widespread panic to the market followed by fear in 2009 (see table below).We argued that the changing economic situation shaped the overall projection on gold demand and its safe haven appeal. In 2012, the economic sentiment point to a contained economy crisis which may suggest that safe haven appeal have dwindled. The other side of the argument is that gold is consolidating after posting a high of $ 1920.

For 2013, the global economy outlook suggests that we are in for a possible “Recovery”. One could then argue that we may see a further decline in gold prices and the downward trend will continue as the economy situation will start to fare better. The current gold price seems to suggest that our theory is correct but could this last? Despite a possible recovery, the behind-the-scene fundamental remain anchored to firmly support a higher gold prices. This is because of several factors such as the continues money printing programmes; extremely low interest rate; an increase in currency devaluation among developed and developing countries; higher inflation expectation and last but not least a higher debt burden that could further stutter economy growth.

Therefore, it remains to be seen where gold prices may go in 2013. If only we have a magic crystal ball.

Short Term:
Gold recent attempt to move higher remains muted. In our last commentary, we did explain that it is still in a consolidation mode after making the 2013 low and vulnerable to a fake rally. Its first resistance is to clear $ 1587 level before taking out $ 1600 which remains to be the psychological level to break higher. Both the stochastic fast line and the MACD have crossed higher which suggest buying interest at the lower prices.

Medium Term:
Prices finally retraced higher after the overextended selling that pushed it below the bottom range of the Bollinger band. A Hammer is formed on the daily chart but gold is still vulnerable to more downside pressure. MACD is still rolling in the negative zone while Moving Average indicator have not cross higher. We remain bearish and still feel gold prices need to test and build a strong base before any higher rebound. 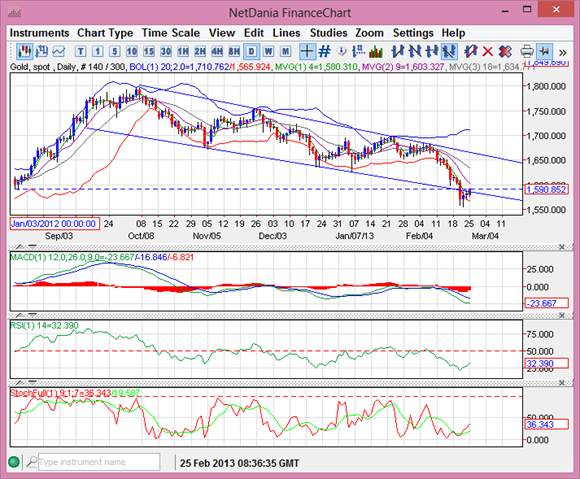 Short Term:
The bears remain in control of the silver market. Selling momentum pushed prices to retest February low of $ 28.28 but failed. Silver low last Friday was $ 28.38 which then generates buying interest. In the short term, resistance stands at $ 28.91 area and any rebound remains minimal.

Medium Term:
Daily chart indicate that prices have moved above the bottom end of the Bollinger band. However, it is still trading below several of its key moving averages and the MACD still stuck in the negative zone. We remain bearish on silver and see further consolidation before an attempt to move higher. 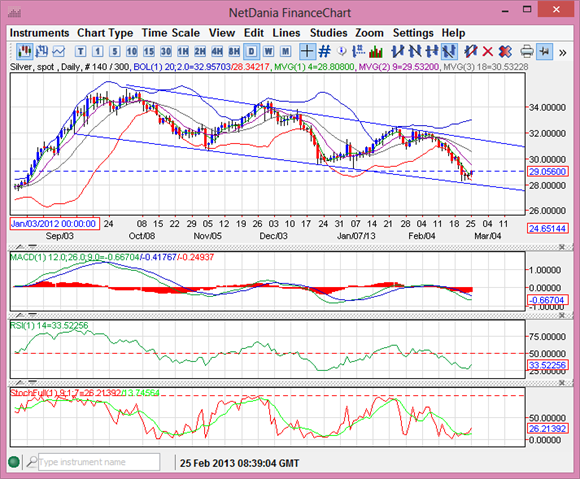