Anthony Grisanti of GRZ Energy said “Gold still has room on the downside”. He added that there was a seismic shift in traders’ sentiment, as they are looking more likely to sell in the rallies rather than buying the dips. Other supportive evidence came from Barclay’s recent report stating that there were 270 tonnes of gold holdings bought above the current price which could pose further downside risks on gold. In our previous commentary, we have also highlighted our concern that a rebound is due but the downside risk remains. We cannot discount the fact that gold is out of the woods, instead we fear a retest of $ 1327 as a high possibility in the near future. We draw our reasons mainly from the continuous outflow of gold backed ETF which suggest more selling pressure, loss of confidence among investors who are still holding gold and the current market is in correction mode. Buyers remain wary and many analysts fear that the rebound is more likely due to short covering rather than any long term interest to hold a higher price.

The price drop in paper gold has sparked a buying frenzy in physical gold. Continuous outflow of ETF money seems to suggest that long term investors are substituting paper gold with physical bars. Bloomberg report confirmed that “there is evidence of some switching from the ETFs to the allocated bullion accounts”. Such buying frenzy has caused supply shortages of physical bars and analysts predicted a possible short squeeze. Meanwhile, gold price is stabilising and trade in the range of $ 1404 to $ 1434 area. A break either way will determine the short term direction on gold. Break above $ 1440 could give the bulls strength to target the 50% retracement line at $ 1456 while a break below $ 1403 will add selling pressure and potentially revisit the previous low of $ 1325.

Gold continue to consolidate above $ 1400 level and there is a real struggle for the rebound to head higher. It briefly hit the high of $ 1439 on Monday and have since made several attempt but failed. There was strong resistance at $ 1434 level followed by $ 1439 (see chart below). The 4 hour chart shows that gold is stuck in a bit of a limbo after hitting the upper trend line while trading above the 20 DMA as well as the 55 DMA. The current trading trend seems to suggest that gold could either head higher or break lower but need a significant commitment to either break pass $ 1440 or $ 1400. 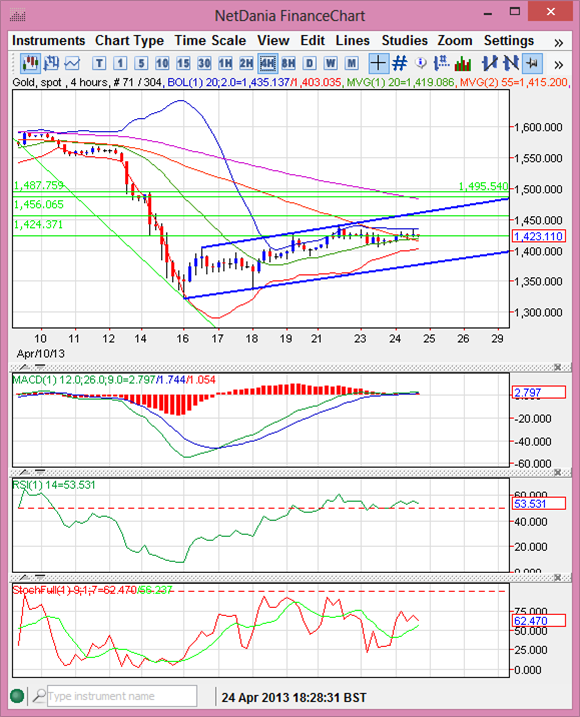 There is no denying that silver continue to lose its allure as prices traded lower this week. Global economic sentiment has not improved but in a decline, thus adding more pressure on silver. In addition, silver is usually treated as a substitute of gold for investment purposes but the current price has hardly moved higher despite strong physical demand for bars and coins. It continues to amaze us the distortion between physical demands against the paper market which dictate the current price. Given the recent weakness, we fear that silver could go much lower in search for a good support. We are not sure where the bottom lies but felt that it may retest previous low at $ 22.06. 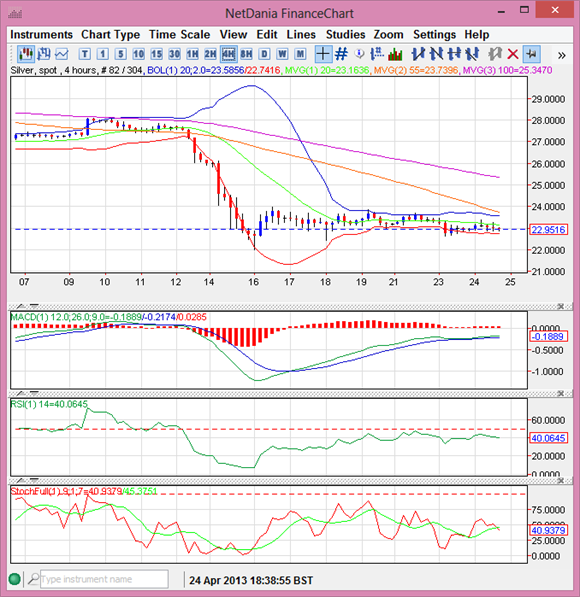