Bullion Round Up
Is this the beginning to the end of the decade long Bull Run on gold? The media seems to think so, backed by reputable investment bankers predictions. When the going gets tough, many investors lost a great deal of common sense and start preaching “manipulation”. The fact is gold has lost 20% of its value after reaching the all-time high of $ 1920 area. The bulls argued that after the giddy high, prices need time to consolidate its gain before another attempt higher. On the contrary, prices already attempted to break higher but failed on three separate occasions at the pivotal area of $ 1800. The price movement over the last 2 years could well indicate a major change in trend and this should not be treated lightly.

The latest price action shows a lower high and lower low, which is a classic bear market situation. It is clear then that the bears have triumphed over the bulls over many occasions and this action is supported by a large outflow in gold backed ETF. The once gold supportive investment bankers have changed their perception on gold investment as well. Their arguments are the direct opposite of what they preached 4 years ago. Inflation remains controlled even when the Fed undergoes large scale QE programmes, nominal interest rate could increase higher in the near future and gold is no longer a safe haven. Recent report from Reuters suggests the danger of deflation in the Euro area is mounting. This will add negative sentiment on gold as a prospect of an inflation hedge is out of the window.

On the other side of the argument, the bulls remain on the defensive as the fundamental issues such as the Eurozone economic and political risk still exist albeit contained for now. Unemployment in Europe has reached an unprecedented scale and austerity continues to discourage any economic growth. Some analysts felt that EU politicians have overstated the positive contagion in the Eurozone. Instead, they voiced their concern of a political upheaval and large scale social changes. Japan unveiled another round of QE to fight off years of deflation. They have done many QE before but this time it is on a larger scale and the results and consequences remain to be seen. The 2008 financial crisis happened for a reason and it results in massive economic default that leads to liquidity crisis. Central bankers are working hard to plug the massive debt and avoid the liquidity crisis by printing and it is unlikely for them to stop. With so much newly printed fiat currencies, gold bugs continue to stay faithful in their safe haven assets despite all the negative press on gold lately.

Prices tumbled hard and fast with no breaks or support at the pivotal $ 1525 area. Several market reports blamed the drop due to the hawkish remark from the Fed leaked minutes, Cyprus selling their gold reserves and the London physical market that froze and hinder any purchases. Short selling dominates the day and it came at a time when investment banker’s prediction of the bloodbath came true.

In our last commentary, we have advised cautioned and will continue to stick with it (see below) - However, gold buyers remain sceptical and maintain a cautious view on another gold rally. In the meantime, we will remain cautious and wait for another pullback before adding into our long position.

The market will remain turbulent and volatile as the early Asian trading hours faced long liquidation. Investors scrambled and panic selling took hold in a thin market. We could see a quick drop in price before a reasonable rebound (a dead cat bounce) before further selling to determine a bottom. 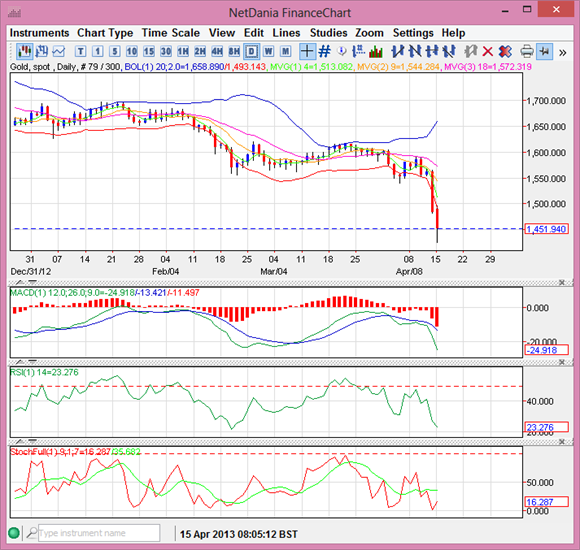 Silver remains weak and price movement is blighted by weakness in gold. The bear market has taken grip on silver which may have more room to the downside. We will not guess how big the damage will be but mainstream media have suggested that silver could retest previous low at $ 24.00 and in worst case scenario back to $ 19.00 an ounce.

It is impossible to suggest where the bottom will be but staying on the side-line is a better option. 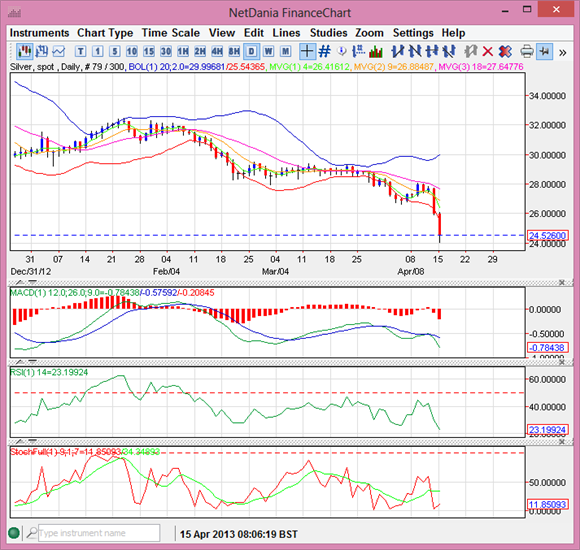