The current global economy is flooded with too much liquidity and they are searching for a return. Stock market in the US seems a viable place for investors to place their cash. However, one has to remember that the current stock market could be overbought considering its continuous rise. Several analysts raised concern on the high margin debt in the current market where traders are borrowing more to invest - taking in more risks once again. Margin debt stood at $ 364 billion is only the second highest after $ 381 billion witnessed in July 2007. The only difference this time is that the mind set of those who are speculating felt obliged as they are flushed with easy money, fake euphoria and if they get it wrong - the government might just bail them out again.

Are we in a state of total denial - ignoring the current debt situation and in search for short term gain? The 2008 financial crisis is indeed different from the other crisis since there are more too big to fail corporations. Major corporations were bail out with tax payers money, the main culprit of the financial crisis are juiced up to do more or less the same with a slight hint of tighter regulation and we look set to repeat the 2008 crisis once again. Politicians and economist decided back in 2008 to kick the can down and argued they will fix these issues sometime in the future. It is a worry that the future generations will have to take up the burden, debt and problems of today. But that worry is for another day ~ in the future perhaps.

A positive takeaway on gold is whether the good US economic data will continue to get better after sequester? Will the Euro crisis resurface after months of blissful peace? Can central banks continue to contain inflation after the rampant money printing programme? Only time will tell. On the other hand, investor’s perception on gold should be more positive. The current situation seems to set gold as a better alternative should all of the above negative economic sentiment resurface. Gold prices have come down considerably and left an upside gap despite all the negative sentiments it has been receiving. We are not gold bugs at all just a humble observer who wish to share our views on why holding some precious metals is important.

As the dollar index weakens and it has got rooms to further weaken, bullion prices will remain supportive. 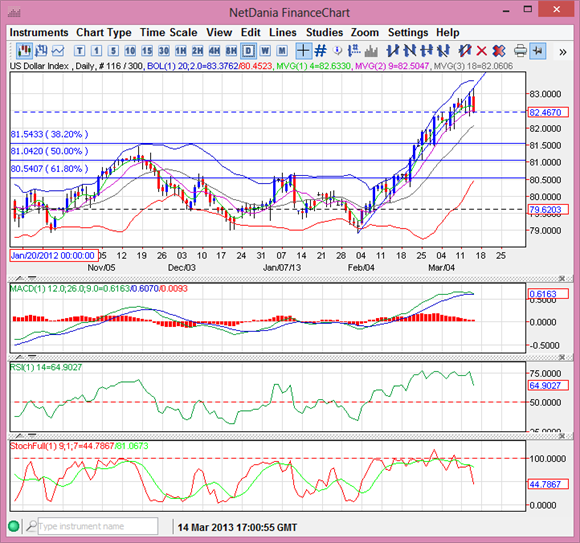 In our previous commentary, we describe in short that we could witness a political crisis and a drop in public confidence of governments. Our nearest example is of course the Italian election that has yet produces a clear winner but the anti-euro and austerity group are getting louder each day. One could only imagine if the German public loses its patience and confidence in the single currency. Food for thought Mrs Merkel.
Pre jobless claims data, gold was already in retreat and moved lower. The report we posted yesterday highlighted the short term support levels at $ 1584.86 (38.2), $ 1580.39 (50%) and $ 1575.91 (61.8). Prices did retest and found support at a low of $ 1576.00 before crawling higher to $ 1585.7 area. We also warned that prices may further consolidate after its latest attempt to break $ 1600.00.

The positive takeaway here is that we should have witness a bigger drop in prices after a better than expected jobless claim report. Instead, prices reclaim some of the losses it made and this may indicate the bears are somehow exhausted in the oversold market. A test of support and base building in the next few days would be supportive on gold in order to mount another attempt to take out $ 1600.00. 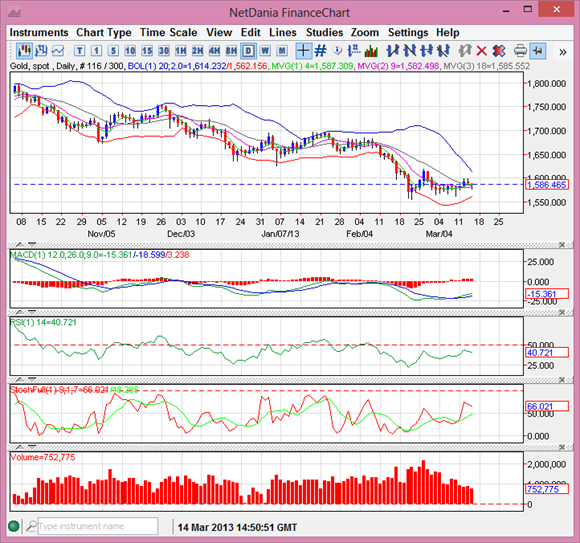 Silver took the heavier punishment as prices break to a low of $ 28.55 after the positive jobless claim report. Compared to 2 days ago, prices reached a high of $ 29.35 and have been consolidating at lower numbers. The short term technical picture is rather bearish as the MACD crossed lower into the negative zone and the lack of volume did not help. We addressed the issue on the lack of follow through buying as the main causation that prices headed lower. However, we felt that silver is retesting for quality support and the base building continues.

The daily chart shows that more consolidation ahead as the stochastic fast line crossed lower and the MACD is still rolling in the negative zone. Volume has been rather muted but the Bollinger band is getting tighter and that indicate a breakout is imminent.
We advise caution on any silver trade and will only get more bullish if $ 29.50 is given. 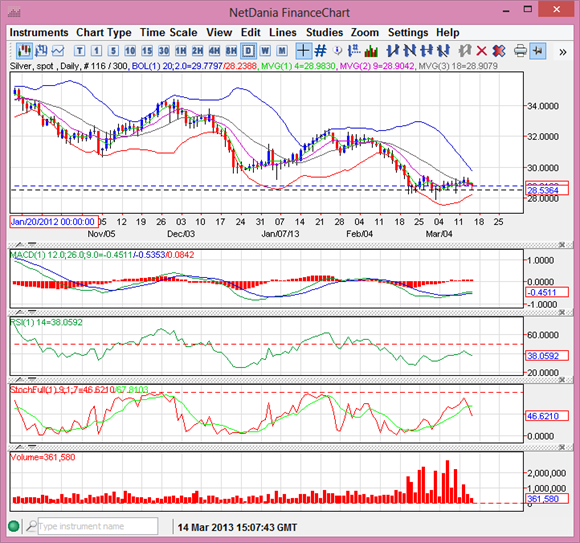