Russian central bank continues to be in the spotlight after a mass hoarding of gold bullion. It came as a surprise that Russia overtake China - the biggest buyer as they look to diversify their black gold into the yellow metal. It is a risky trade for the Russians as they are betting that the bad economic times will continue to roll, boosting the demand for the precious metal.

India never really left the spotlight either even when domestic demand is down due to the import tax rise, the cultural demand for gold remains strong. With most of the Asian market up and running apart from China, bullion prices remained bearish at best due to its poor technical standing. Traders felt that a retest of $ 1625 is still possible if $ 1635 is given. Selling pressure remains persistent as long as the gold price did not cross above $ 1664 area. The market is keeping a close eye on a possible retest on several support levels but will also be on the double if a possible reversal took place. Bargain hunters did voiced their opinion that a price below $ 1650 is considered cheap to enter. Now it is time to put money where their mouth is.

Obama warned that the looming budget cuts would jeopardize military readiness and cost hundreds of thousands of jobs. He added that the “sequester budget cut” is a really bad idea during his annual State of the Union speech. “Most Americans - understand that we can’t just cut our way to prosperity” he added.

Yesterday, the governor of BOE - Mr. King accepts a higher rate of inflation as a trade-off to stimulate the British ailing economy. The economy has had its fair share of ups and downs but the most recent coverage was the possibility of a triple dip recession. With the on-going austerity plan to cut government debts, Mr. King seeks external demand to prop the economy back. Market analysts take his statement away to sell the GBP as a sign that the economy needs a more competitive currency so as to obtain the “external help”.

Short Term:
The early European trading hours, gold prices remain capped in check and any upside momentum will remain minimal due to a strong US dollar index. An attempt to cross above $ 1654 (50% retracement) failed which eventually pulled it back to retest $ 1643 area. We marked caution in our last commentary of a possible fake short rally and this was the case yesterday. At the moment, rallies are sold as the bears remain in control. Short term stochastic signal remains negative which suggest selling pressure persist. The January low will still be the key target ($ 1625) in the next few trading days.

Medium Term:
Several market technicians suggested a possible triple bottom chart pattern on gold daily chart. Our argument is that it is an imperfect one and remains vulnerable to the downside. Technically, the gold price encourages investors to short the market in an attempt to retest $ 1625. Should the January low failed to give support; we fear a return to test the psychological level at $ 1660 area is possible. 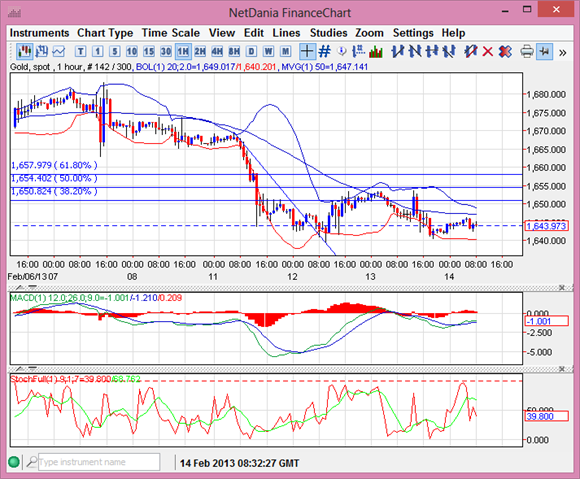 Short Term:
The failure to hold on to prices above $ 31.17 or a recovery back to resistance at $ 31.23 (previous support) sent the industrial metal back lower. It is still trading with a downside bias as the MACD has rolled negatively again - suggesting an increase in selling pressure. Silver is searching for a stronger support before it can attempt another rally to erode $ 31.25 area.

Medium Term:
The one positive note is that silver is still trading above its 200 DMA ($ 30.66) but well below its 50 DMA ($ 31.30) area. The Bollinger band is converging again which suggest possible breakout in the medium term. Stochastic remain weak and drawn to the downside. In the meantime, silver will trade between the 200 DMA (possibly to retest support) and the resistance at $ 31.23. Should prices break below support then it may retrace back to $ 30.00. 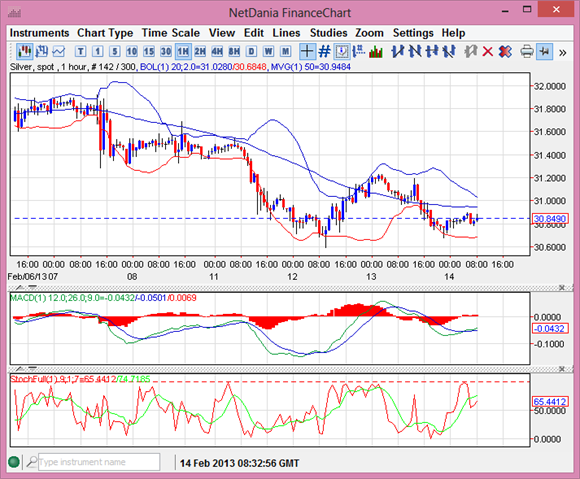