Gold and silver prices are at the mercy of the remarks that Fed Chairman will make this Wednesday and Thursday. It will be appropriate for him to clarify to congress about his intention as well as what other Fed members will do with regards to steering the US economy to growth. The upcoming speech will be paramount as it will determine the next direction of the US dollar index, global equities as well as gold and silver prices. Chairman Bernanke also needs to address his decision clearly after last week Q & A that left most of the market participants confused. We have seen equities rallies after a very dovish remark and risk assets in general has also risen.

The main worry among market participants is that his latest dovish remark may have a temporary effect only. Mr Bernanke mainly said the same thing he used to say “the Fed will remain accommodative … economic data dependent … tapering is an option that he will deploy … FOMC meeting minutes shows most members would like to curtail QE programme”. Either the market jumped into conclusion again, the up and coming speech will be another opportunity for Mr Bernanke to clarify his intention.
Recently, Bloomberg reports in their survey that hedge fund managers are bullish on gold prices in the short term. It remains a debate among those in the bull and bear camp. Some are shouting that a bottom has been made at $ 1180 and this is the end of the bear rout. A break above $ 1350 will encourage short covering their positions. However, a break to higher number such as $ 1400 will not change the downtrend bias. Meanwhile, there are others who see the rebound in price as a corrective move (Elliott Wave Theory) suggested that we are in wave C corrective move. Given the lack of inflationary pressure as well as the need to hold safe haven asset, UBS Dominic Schnider continues to see gold lower and possibly retest $ 1180 area again. He sees the yellow metal falling to $ 1150 in the next 3 months (source CNBC).
"We're in a technical bounce, similar to the bounce we saw in April. I cannot rule out that we head to $1,350 levels. But the technical recovery will run out of steam rather soon. Once $1,350 is reached, people will exit," he added.

Gold prices moved higher at the start of the week to retest previous high at $ 1298 level - it was a tad short and only managed $ 1295 area as the bears try to defend the psychological level of $ 1300. After the expected Chinese GDP numbers, prices fell to retest at $ 1274 due to a sudden surge of US dollar demand. With the release of the US Core Retail Sales that came in worse than expected, US dollar demand waned and gold started to gain again. It jumped to settle at higher prices but resistance is strong. Traders are wary to take up any additional positions before Chairman Bernanke testify to congress. A we have highlighted above, it is the main event that could set the short term direction.

We maintained our view from our previous commentary that “The rebound in gold prices must be treated cautiously - rising prices could just be a smoke screen to what could be coming next”. Shorting the metal is far more favourable as it could retest $ 1180 and should it break lower, we see $ 1155 as the next target. 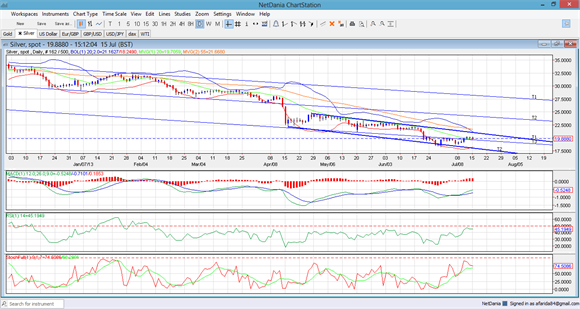 Traders Notes: Stay on the side line. Only a break above $ 21.60 will give the bulls more ammo to retrace higher.