Gold & Silver; Better off in Equities!

Global easing continues as central bankers around the world are busy cutting interest rate and laying out policies to make the changes permanent. ECB Mr. Draghi even suggested that they are “open minded” about negative interest rate. The Euro tumbled lower after his speech after the initial 0.25% interest rate cut. The ECB was under a lot of pressure to cut interest rate simply because of mounting economic data that suggest a contracting Eurozone and the high unemployment that may increase social disorder. Yesterday, we witnessed Australia’s RBA cutting rates by 0.25% as well. “The reaction was rather sharp as only a sizable minority of analysts were looking for a cut at this meeting” quotes from tradingfloor.com.

The Obama administration is cancelling $4.9 billion of the $85 billion in automatic US spending cuts that took effect March 1, a move that restores some funds according to White House official via Bloomberg. The Federal Reserve maintains the $85 billion QE programme and could possibly look to increase or decrease it. Japan just embarked on a large scale QE programme to fight deflation. The current situation painted the urgency among central bankers to act now rather than being branded as too slow to react. They are like poker players, being forced to throw more money so that the others cannot call their bluff. At the same time, they are running out of ammunitions after committing a large bet on the table. Their short term approach is to throw more chips (more money printing) so as to keep the game running. Equities are rising on the back of more money printing, adding pressure as an alternative investment compared to precious metals.

Gold prices are currently supported by a strong physical demand that was ignited after the huge sell-off. “We expect the physical demand to support the market, but could prove difficult to maintain in the face of rallying equity markets, ETF outflows and speculative financial shorts” said ANZ in their monthly report. Despite the continuous global easing, disinflation seems to be the main agenda that needs to be address. On the contrary, Gold is usually bought as a hedge in times of rising inflation. After the massive sell-off, gold will need to time to recover and rebuild a stronger case before moving higher. Continuous ETF outflow are slowing down and weak hand investors have been flushed out of the market, thus creating more rooms for gold to recover. At the moment, gold will need time to regain that confidence back.

Gold is currently trading in the range of $ 1440 to $ 1488; investors are pausing to digest the recent economic data and changes brought about by central bankers. Physical demand may start to slow down as prices have risen close to $ 1500 area and some investors will wait for another price drop before committing to more purchases. Meanwhile, MKS report their short term view “market chatter of large stop loss orders accumulating above $ 1500, the market has every reason to push higher over the coming days/weeks”. The short sellers will defend the $ 1525 level which will act as a strong resistance for further upside.

We would like to repeat our advice from our previous commentary that the gold market could see possible slowdown in physical demand which may weaken gold rebound. In addition, continuous outflow of funds from ETF only increase selling pressure. Investors who are still holding will be wary of a possible margin call again. 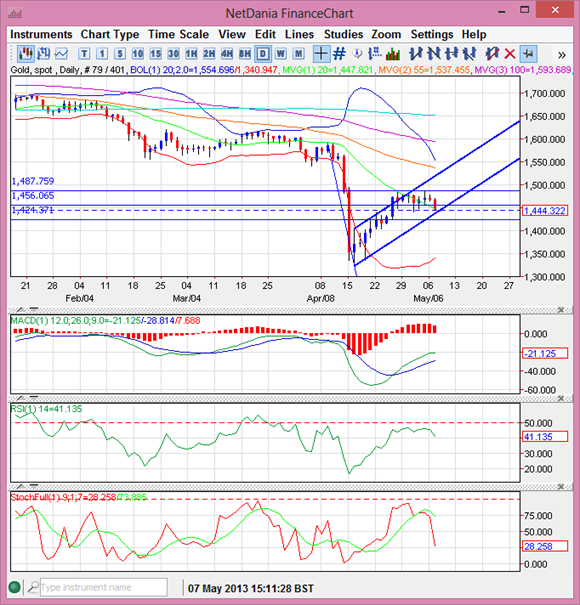 Silver followed gold, breaking lower to retest a low of $ 23.45 area before rebounding higher. Previous low stands at $ 23.26 and should silver break below that then it look poised to further selling pressure. Daily chart shows that prices are trading lower after hitting the upper trend line at $ 24.83 which is the resistance now. The current price is still in the uptrend line but a break below could spell a retest to previous low made at $ 22.00 area.

We must continue to warn that the rebound could be on its last leg and a break below the lower trend line (Daily Chart) could spell more downside pressure on the white metal. The market remains bearish and this rebound could prove short lived as the speculators are positioning for more price weakness in the next few weeks. 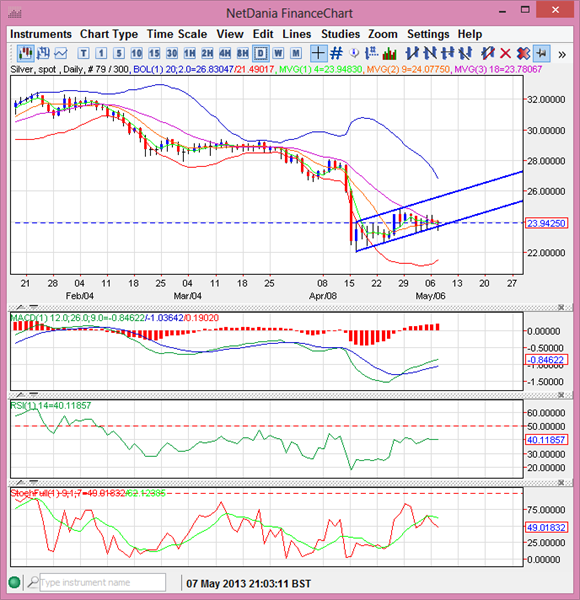