Chairman Bernanke made a good point that he does not understand about the gold market. Most investors have lost faith in the yellow metal after a steep fall from the beginning of 2013. Hedge funds and money managers seem to have an early warning that tapering is on the way regardless of the economic data. Pulling out of the massive bull market was a feat and a correction that happened was indeed severe. At the moment, the market remains thin and large traders are enjoying their summer holidays. Taken that into consideration, market movement is expected to be swift and full of swings but no real direction. One has to be very cautious while trading in this market.
The US dollar index has fallen below significant key level and more weakness could set in after it broke below strong support of 200 DMA which will not turn as resistance.

Dollar bulls exited their positions despite on-going talks of tapering but the uncertainty has left many worried, thus unwinding the long trade seems to be more viable. Despite an encouraging economic data, dollar index has no friends but we are watching closely if the market is turning oversold and will not be surprise if it resume higher because of overdue correction. Gold and silver are sensitive to the dollar index development and after posting a low yesterday; both managed to rebound higher due to some short covering. The lack of follow through selling on both metals seems to sway the short sellers to be more cautious. Uncertainty over the amount and when the Federal Reserve will taper continue to stir the market. Fed officials are out on full force this week, making sure that their communication on tapering is a matter of when and not if.
Tapering by the Federal Reserve has been priced in; other central banks continue to be dovish and accommodative with their monetary policy.

The main worry which we highlighted in our previous commentary was stemming the green shoots too early. Mark Carney of BOE made a clear statement on Forward Guidance with interest rate to stay until a clear improvement on the unemployment rate. It is crisp clear that low interest rate is here to stay but not to assume that one of this days we might see some sort of reduction on the QE programme. With that, we would like to assume that Federal Reserve lead the way to pioneer new monetary policies which other central banks will adopt at a later stage depending on their own economic recovery. Easy monetary policy will remain for a little longer but it could be performing for the last time as central banks look set to turn off the tap sooner or later.

Gold is a lot weaker after a good corrective run higher but there are many other factors that can give the yellow metal some support. Pausing above the 50% retracement area could allow the gold bulls to build some solid base before another attempt higher. Given a weak dollar index, it should be able to resume higher but the thin market has not provided any follow through. Taking a position in the range of 1290 to 1320 remains risky and most traders are waiting for a breakout so as to provide a direction to trade in. However, the short term remains biased to the downside for now.

Should it break below 1273, it will trigger more stop loss and could easily take gold to retest support at $ 1265 area and only a break below $ 1240 will warrant a revisit of $ 1210 area. On the other hand, if it can break above $ 1350 convincingly - we would not be surprise to see higher gold prices due to more short covering. 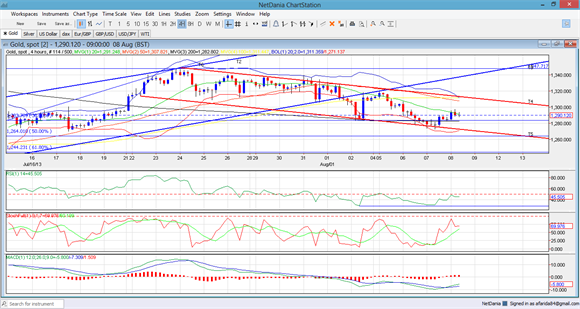 At the moment, silver prices continued to trade within a downtrend channel but the recent retest of low shows that buyers are determined and looking for higher prices. The support at $ 19.20 held twice now and should it break above the upper downtrend channel and managed to hold on to its gain, we could see resumption higher. The daily charts shows a tightening Bollinger band that could imply an imminent breakout but which direction remains unclear. 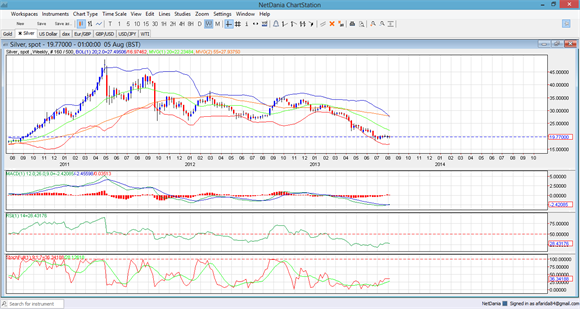