Asian market started with its earlier gain wiped after a less positive Chinese manufacturing PMI register at 50.40 against the expected 50.90. Investors were left surprised after the world biggest economy shrank at an annual rate of 0.1 % in the 4th quarter when forecast was for a 1.1%. The US dollar continues to pare losses while the Euro remains bullish after various positive economic data from Germany unemployment data. However, not everyone agrees that the Eurozone has escaped from the 2012 financial crisis scot-free.

The Economist argued that the crisis was postponed and today Moody’s report seems to assert such possibilities. According to Moody’s, a Greek default remains possible as they expect the country’s economy to contract this year. Despite that, investors are piling their cash to the Euro for now.

Elsewhere, the Milan bourse tumbled 3.4% as a political scandal unravelled on the world’s oldest bank Monte dei Paschi (MPS). As per our last commentary, we are expecting a better non-farm data with an unchanged unemployment rate. Precious metal investors will take cue from these data after digesting the rather similar FOMC statement (from previous January) and we expect a volatile trading for the rest of this week.

Short Term: This morning, the yellow metal traded lightly at $ 1664 after a failed rally. Traders booked in their profit after a positive rally to $ 1685.00. Selling pressure in the early Asian trading hours sustain gold momentum to break higher. Prices will remain range bound at $ 1660 to $ 1690 since we are expecting the non-farm payroll data later today. The data is crucial and could determine the direction on gold prices. Gold has support level at previous low of $ 1652 and January low at $ 1625. We are back to neutral bearish at this moment and would stay on the side line. Gold attempting to break the resistance level which was the previous support at $ 1664.14.

Medium Term: There is a similar daily pattern on this week’s gold price movement. We have seen prices moving sideways during Asian trading times and only to be sold as Europe opens, regardless if the Eurozone stock market is up or down. Significant volume is traded as we get close to US trading hours where traders make or break their balance sheet. Analysts said that the market had already priced in that it would be premature for the fed to abandon the QE programme. Therefore, this Friday’s employment report remains crucial in forming market expectations on future Fed policy. 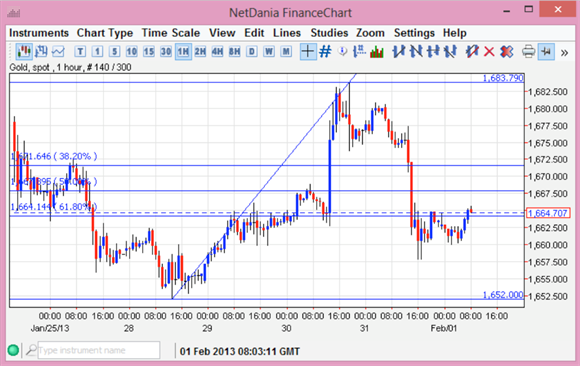 Short Term:
Silver prices gave back all its gain and went below initial support at $ 31.81 followed by the 38.2% retracement line at $ 31.23. Following our last commentary, we placed a trailing stop on our buy position at $ 31.85. Given the current price action, we are back to neutral bearish since silver prices were not able to sustain its gain. We did warned despite the upside momentum, prices are still subject to this Friday’s non-farm payroll data. We are looking to buy on the dip but will not hesitate to short the market if support failed at $31.00 (uptrend line). Looking at the 1 hour chart raised a concern of a possible head and shoulder with a neckline at $ 31.12.

Medium Term: Silver failed to close above the January high at $ 31.46 and doubts engulf after posting a reversal doji. Failure to hold on the initial support encouraged sellers to take control and pushed the prices lower. Given the lack of follow through buying, intraday traders took profits and square of their position. 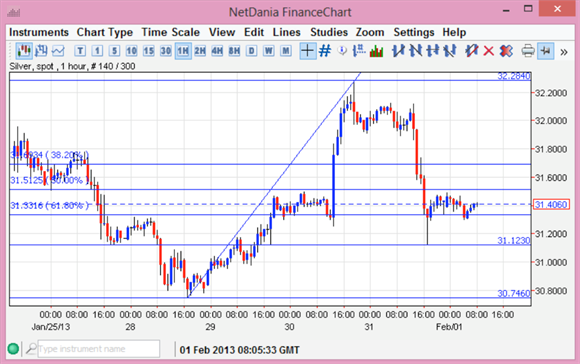