As the week unfolds, more and more economic data will give clues and allow traders to trade cautiously in this thin market condition. There were some encouraging data from the Eurozone, China and Japan which has lifted bullion prices higher. Gold gained and buyers rushed in to support it at $ 1273 and break out of its downtrend channel. Silver propelled higher after break above pivot level of $ 20.00 and held most of its gain. Despite the negative comments from analysts, prices are testing higher and looking to retest previous resistance at $ 1347. Our previous commentary already covered the potential upside should prices break above $ 1347 and $ 1353. Meanwhile, Silver is gaining momentum with the rest of the industrial metals due to better prospect in Chinese demand.

We remain cautious and see most of the rise in prices is due to bouts of short covering. The fundamental picture has not change as gold n silver continue to trade in a bear market. Correction from the last 12 years Bull Run is severe and both metals may need time to unwind speculative longs which it has been doing and a period of consolidation will sets in. Investors need to regain confidence in the safe haven market again but one important aspect has changed. The global economy is recovering but at a snail like pace and money printing has its consequences which will be an economic issue in the near future. Latest Economist magazine reported the possibility of applying “debt forgiveness” for Greece. Portugal continues to struggle economically and politically while Ireland could exit from the current bailout programme to re-enter into a less stringent one.

The global economy is awash with a large amount of liquidity and the Federal Reserve acknowledges the danger. Talk of tapering continues but the main uncertainty remains on when and the scale of it. Investors will take time to adjust to tapering and not tightening as Chairman Bernanke would like to put it across. In addition, the better economic data from China could be a one off and investors again have to adjust to the slowdown in China.

To sum it all up, Edward Meir of INTL argued the following:
“Despite these upbeat reports, we view the latest data as being an upward blip in what we think remains a deceleration in China’s growth trajectory. Having said that, gold prices will likely remain resilient at least through August and it may not be until mid-September when markets turn sloppier in the aftermath of the Fed’s tapering program.”

Gold prices continue to trade within the range of $ 1270 and $ 1350 but the current price action suggest that the bulls are in control and testing to take out previous high of $ 1347. A break above will give more rooms of short covering and we will not be surprise to see that the Bears will try hard to defend this position. The picture remains muddy as it seems that gold bulls could run out of energy while the recent rise in price was due to short covering. Strong physical demand is still the main driver that supports the price. Our main worry is that the larger trend remains down and this bout of short covering rally could soon be over. A downward resumption looks more likely until we see a clear break of $ 1350. 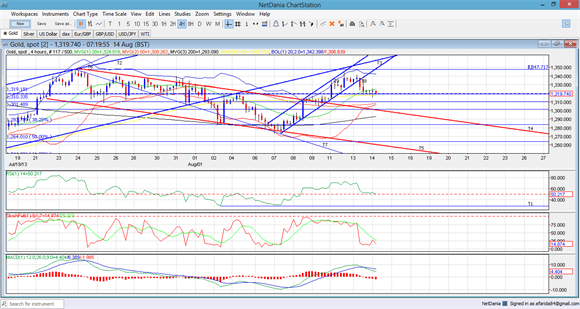 Silver prices have managed to climb up 11% since making a low and this is by no means an easy feat. We continue to monitor this trade and see potentially a good place to go long given that it is an oversold market. Scotia Mocatta monthly precious metal report sums it up nicely that the QE induced rally has been cleared out and Silver is now price at a reasonable range. We felt that the downside is limited for now and fresh investment as well as long position can be considered as long as gold prices can head higher.

Silver could embark on a mini uptrend line and the RSI seems to support the higher prices. The stochastic fast line has also risen higher while the slow line has got more rooms to the upside. 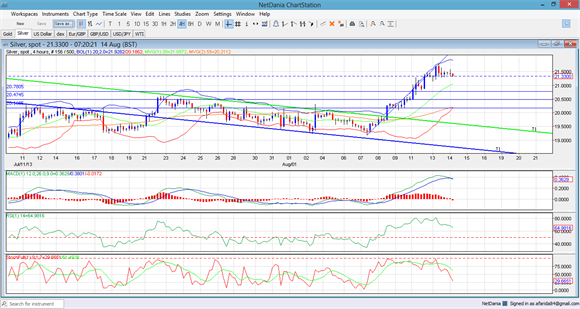