Edward Meir of INTL FC Stone made the following point that owning Chinese Yuan is a better hedge rather than gold - Bloomberg TV. He added “not going to buy any here and the rebound rally has run out of gas, with gold retracing lower level and the previous physical buyers maybe absent this time.” He later added that gold could potentially test old lows or take it out lower. We have discussed such scenarios back in our previous commentary when gold was trading as high as $ 1455 to $ 1475 area - covering specifically that this rebound could soon come to an end. The moment gold break below $ 1440, the part for the rebound rally is over and the current scenario is to take gold down to retest $ 1325 area again. After the rally reach its peak at $ 1488.3 gold has retraced lower and tested support within its range trading of $ 1440 to $ 1488. We warned our readers early and we hope they did take pre caution.

There were various key economic data from the US which put into question if there really was a recovery in the making. US jobless claim came in higher than expected while the Philly Fed numbers were down as much as -5.2% against previous number which was + 1.9%. The US dollar bulls took cover as it dipped to a low of 83.48 after trading at a monthly high of 84.02. It gave some relief to gold and silver after the morning sell off. Early Asian trading was dominated by a stronger dollar and expectation of a better US data. Gold started the day as high as $ 1398 before tumbling to a low of $ 1368 as support at $ 1385 gave way easily. There was no significant dip buying or physical demand to support prices and it gave off a negative perception that short selling the yellow metal was a better tactic.

We would not be surprise to see some relief in the gold market after 6 consecutive days of selling - wiping off $ 100 off the high at $ 1488. The selling was swift and rather technical based as it was to be expected that physical demand which was supporting the previous rebound rally has lost steam and investors who barely made it out from the April selloff were closing their positions. Given it is Friday, gold could bounce back as short sellers may cover and book profit but any rallies around $ 1404 and $ 1417 will be a target for a fresh round of short selling.

Technically, gold continue to face headwinds due to a strong US dollar and strong equities market. The Economist magazine marked the return of the Wall Street bull as long as QE program continues. Low inflation data does not favour gold as an inflation hedge, thus reducing the need to hold the safe haven asset. A break below the 61.8% retracement line will give the bears more ammo to drive prices down to retest previous low. The MACD is about to cross lower again and the RSI and the stochastic fast line seems to support the idea that there are more rooms to the downside for now. We look for a short recovery rally that will be a target for additional short selling. 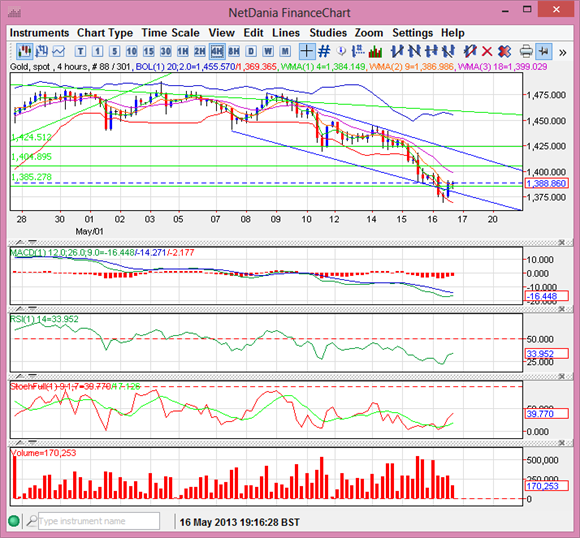 Silver prices tumbled after support at $ 23.19 gave way as it trades outside the descending triangle. Selling continue to escalate in the early trading hours but the white metal managed to find support at $ 22.13 eventually and spiked higher. The 4 hourly charts have turned bullish and the MACD is attempting to cross higher albeit still in the negative zone. Meanwhile, the stochastic fast line has peaked higher and there are rooms for the white metal to break higher. Daily chart shows a possible double bottom which could take silver higher in the next few weeks. Previous support at 23.19 will now be resistance. 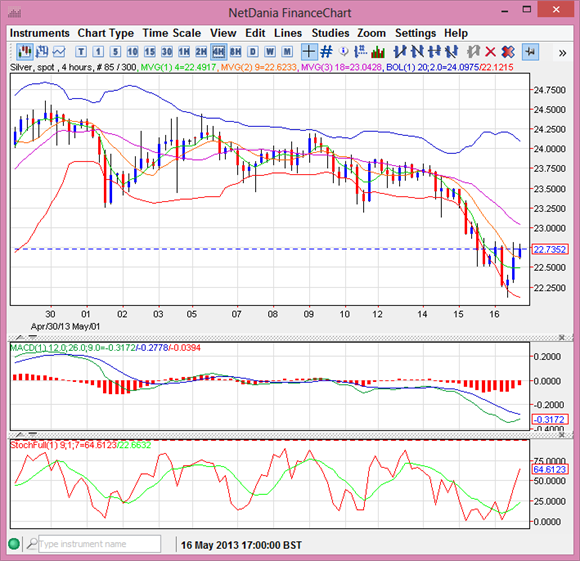