Low inflation numbers and economic growth seems to go hand in hand in the Eurozone and its western counterparts - the US economy. Persistent high unemployment has created social and financial problems for many of these countries. It seems that politicians are too slow to make substantial reforms in the labour market and the monetary easing programme has not trickle down to the main street. Ever since the 2008 financial crisis, central banks have been loading up liquidity to boost market confidence and brought time to sort out the financial mess. There were some improvements but the reward seems rather small for Main Street while larger institutions have benefited from easy money. Some analysts are warning that this easy liquidity are creating asset bubbles that could further damage the economy rather than bringing any long term positive results.

Initially there were talks among the Federal Reserve on tapering the QE programme. However, the latest US GDP numbers came in lower than expected at 2.5% against what economist predicted at 3%. In addition, there were signs that sequester cuts are creating some negative headlines on up and coming economic data. We would not be surprise if the up and coming FOMC statement will sound more dovish than the previous one. Once again, we felt that gold may not gain any real benefit from the release of the statement. Instead, we felt that gold may remain in a tight range or even break lower. It is becoming a pattern that gold hold not much correlation and prices seems to be dictated by the continuous outflow of funds from gold backed ETF. This is not the first time we address this divergence - we have in fact questioned what exactly is causing the gold price to go up and down. There are various old answers but we remain unconvinced.

Meanwhile, anti-austerity movement in the Eurozone is gaining traction. Italy new PM Mr Letta has cast doubt on pursuing aggressive austerity programme that are causing more economic hardships. Both Spain and Portugal has asked for a debt extension programme to try and ease the austerity pressure. EU politicians should not underestimate the call to “taper” austerity. Miss Lagarde of IMF has advised more investment that budget cuts in order to boost economic growth. As long as the Fed continues its current QE programme alongside the Japanese easing programme, the EU end of austerity could easily support gold prices or even propel it higher.

The latest Commitment of Traders Report (COTR) - 23rd April 2013 shows a further reduction of long positions, while short positions have significantly increased. Continuous outflow of funds from ETF is a continuous trend as investors could be moving away from paper gold to physical gold. Gold prices may have rebounded higher but many market technicians argued that it is not out of the woods yet. One of the biggest worry is that gold could break lower and short sellers continue to add pressure. A break below $ 1456 (50% retracement) could easily take gold to a low of $ 1404. However, a break pass $ 1404 will give the bears more control and prices could fall to revisit $ 1325 again.

Traders will be more vigilant for up and coming economic data that may shed more lights to where the market may go. Gold remains at the mercy of the short sellers or potentially new short sellers. 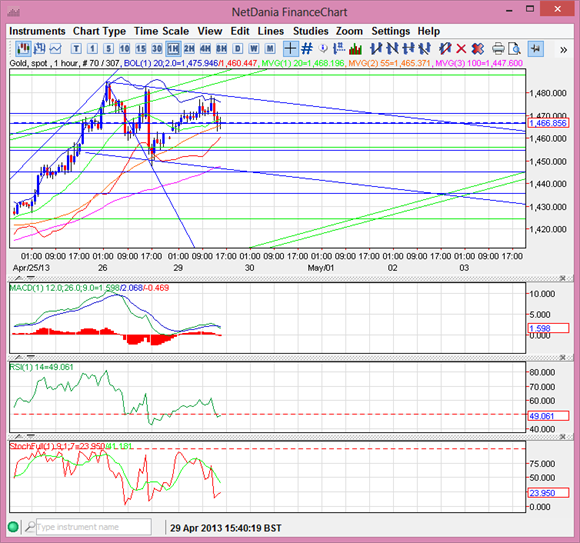 As gold prices moved higher, silver follow suit and opened higher during the thin Asian trading times. With a weaker US dollar index, the rally continued to retest the upper band of the trend line (see chart below) where the 38.2% retracement line sits currently. COTR report shows the decline in long positions while the short sellers have continued to pile in. This indicate that the industrial metal could revisit lower prices and it is not a surprise when the global economy remain weak (US posted weaker numbers and Chinese GDP at 7.7% only).

After last Friday rebound, silver may continue to consolidate the recent rise or it could potentially continue on a downward course. We are not sure where the bottom lies but felt that it may retest previous low at $ 22.06. 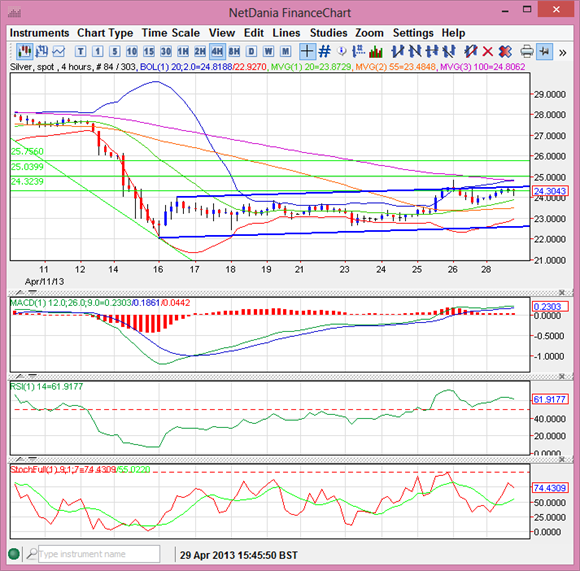