On the positive note, the SPDR gold trust stay unchanged after eleven straight session of outflow. This may indicate that a bottom is near and the current gold price is undergoing further consolidation to build a strong base before tapering the oversold position. It could also mean that ETF investors are having second thoughts and the initial outflow is a temporary hiccup. The US dollar index also lent some support as it drop lower from a high of $ 82.47 to retest $ 81.97 level. However, gold price trade in a tight range of $1575 to $ 1585 and remain vulnerable in the short term to more selling pressure.

At the moment, we are experiencing an all-time high with the Dow industrial and the S & P 500 is close to making a record high. Investor’s sentiment improved in the stock market and a better outlook on the US economic data lent support to such theory. Global stock markets are benefiting from the talk on “global easing programme” lead by central banks. Yesterday, we witnessed a highly accommodative stance by BOJ, BOE and ECB to promote recovery and growth in their respective economy. ECB see downside risk that may jeopardise the recovery and Mr Draghi explain his concern on the Eurozone high unemployment rate. Several analysts are worried that the ECB has run out of tools to prop the slowing economy. Meanwhile, BOJ and BOE current governors are paving ways for the next governor to act, potentially to apply a more aggressive monetary easing. But where do gold stand on the dovish remarks? There is only one word to sum it all up and that is “Muted”.

It is a wild guess but from what we can see, safe haven appeal has dwindled which explain the falling gold price. Bloomberg commentators added that there is potentially more money from pension funds and bond investors that are on the side-line and they too may start liquidating their safe haven investments and jump into the stock market. We are now experiencing central banks around the world that act in unison to prop the stock markets with liquidity. So if the general public starts to join in, will there be an asset bubble in the making? The Fed does signal that they are more worried of a deflation rather than inflation. Does that mean that gold will soon evolve and being sought as inflation hedge? The other concern we have, does a record high Dow index with a high unemployment rate in the US sustainable?

Short Term:
Prices opened higher during Asia trading hours and we have said many times it is a recurring pattern that gold is sold during US trading time zone. The resistance at $ 1587 is strong defended by the bears and technically, gold does not have a strong momentum to break higher. The converging Bollinger band suggests an outbreak and as of the time of writing, we could see further weakness in gold.

Medium Term:
Gold remain directionless and it is between a rock and a hard place. It did not break below the base of the triangle and crawling in further consolidation. The MACD has converged again but without a cross to the upside, prices may remain lacklustre. With a relatively low volume, the RSI still indicate that it remains oversold. We will be more bullish once the stochastic and the MACD move in tandem. 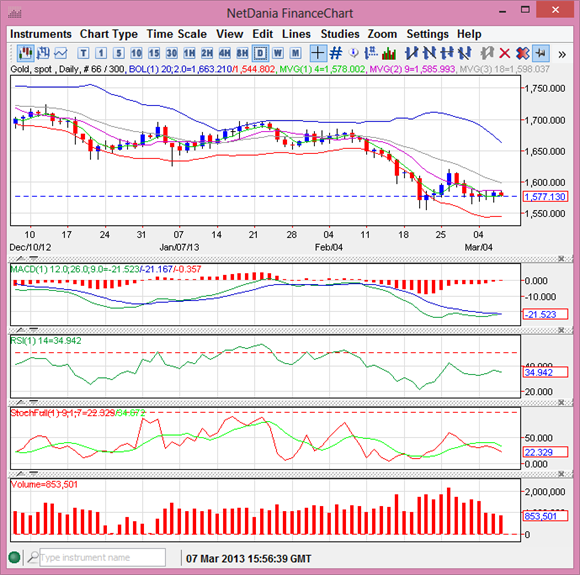 Short Term:
Capped! Over the last 2 days, silver prices tried to break $ 29.08 but failed and return to look for support at $ 28.85. It is acting just like gold, trading within a tight band between $ 28.50 and $ 29.00. However, the short term Bollinger band is converging with a slight bias to the downside. We remain bearish for now despite silver latest attempt to make higher highs and lows.

Medium Term:
Low volume trading in yesterday market does not help sentiment. The white metal remains in consolidation mode but the upper Bollinger bands is pointing lower to converge. Past technical experience tells us that we are close to a bottom and given that it is oversold, a rally to the upside is possible. In addition, the fast line on the stochastic remains positive and it is awaiting a positive breakout on the MACD to help move prices higher. 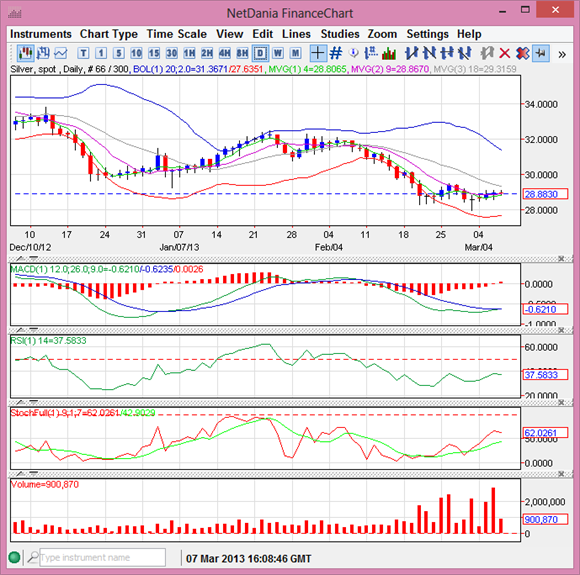