It is undeniable that short covering and technical buying from bargain hunters has helped both gold and silver to rally higher. August is also meant to be a good month for both metals and the last few months of oversold condition are correcting itself. The bullion market is reacting healthily given the supportive conditions and correlation of a weaker US dollar index, strong physical demand out of Asia and increasing interest in gold back ETFs - “SPDR posted a 0.4% gain in holdings last week to 915 tonnes - its first increase since Nov 2012” Reuters. Mr Ole Hansen, Head of Commodity Strategy of Saxo Bank added that “Hedge funds increased their net-long exposure to commodities by 12% … the increase was primarily driven by net-buying of metals such as gold and copper”.

Despite the positive upbeat note, we remain sceptical and continue to advise that a new short selling opportunity is in the making. Gold prices propelled higher due to bouts of short covering after posting a new low at $ 1180 and several attempts to take it back has failed. However, the general underlying trend remain bearish on gold and only if it can break above $ 1475 and $ 1525 area (possibly with a golden cross to support the move higher) then the bullish resumption stands. We cannot rule out that after this short covering rally we will see a pullback to retest the breakout range around the $ 1310 area. Only a break below $ 1270 will give the bears the catalysts to retest previous low. On the other hand, the weekly chart suggests that the current rally could end at $ 1415.00 resistance area (38.2% retracement from the high at $ 1800 to the low at $ 1180).

Going forward, prices may consolidate its current gain before resuming higher. Traders and investors could also lock up their profit ahead of the FOMC meeting minutes and Jackson Hole event. The US dollar index continues to weaken and a break below the technical level of 80.95 could further weaken it. Therefore, the upcoming events could provide a base for the dollar index to regain some strength. Otherwise, we expect more weakness going into Septapering period.

To be fair, both gold and silver need to break key resistance level before it could resume its bull run again. The next few months’ price action will be crucial and it all depends how much short covering will be done. A temporary moment of bliss and consolidation will sets in before another major direction play is in place. We continue to share the following worries as per the following script from Edward Meir of INTL:
“Despite these upbeat reports, we view the latest data as being an upward blip in what we think remains a deceleration in China’s growth trajectory. Having said that, gold prices will likely remain resilient at least through August and it may not be until mid-September when markets turn sloppier in the aftermath of the Fed’s tapering program.”

This short term bullishness indicates a bottom in the market is in place but most investors remain sceptical that a trend reversal is in play. A corrective move higher is currently in play to target $ 1365, $ 1376 and $ 1415 area. The MACD suggest that the potential room to break higher remains while the stochastic is showing strong momentum. Our only worry is that the larger trend remains down and this bout of short covering rally could soon be over. 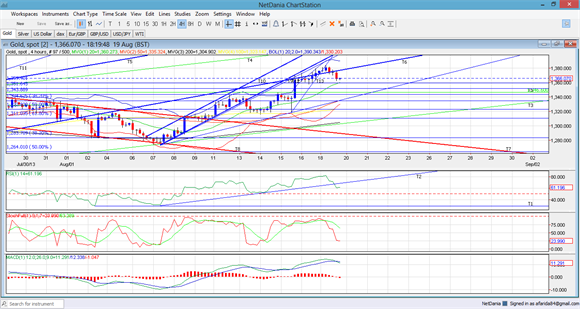 Silver is trying higher to break resistance from previous downtrend line (see daily chart below). Should it pullback from here, the market will remain healthy and allow more rooms for bargain hunters to re-enter and add on their long positions. That is based on the assumptions that gold prices could head higher which could then support the white metals. The most promising chart is the Weekly chart where the stochastic fast line is trending higher, indicating strong interest and a higher RSI that confirm higher move is possible. The MACD is still in the negative zone but a change in trend could be in play soon. Given the increase interest in bullion again, silver may well have more rooms to the upside before the pullback. 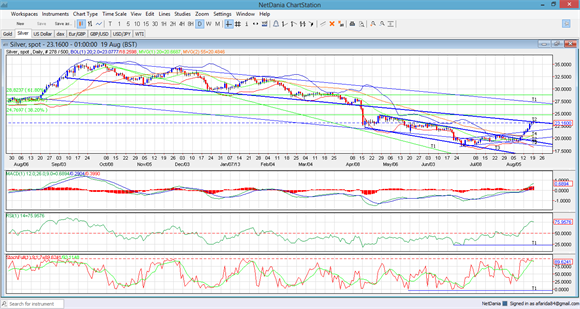