Initially, the FOMC statement sent a rather confusing message but Fed chairman Bernanke put down to the market that he remain committed to be accommodative even when reaching the unemployment rate of 6.5% - promising forward guidance to keep a low interest rate environment for a foreseeable future. Tapering was mentioned because Mr Bernanke admits his worry about asset bubbles and market taking too much risk. On another note, he raised his concern about deflation more than inflation but overall it is a very dovish comment and that sent the US dollar index plunging lower. Expect the market to rise higher until the end of the week as traders look to position for higher stocks market.

As far as we are concerned, the global financial community has not fully recovered from the 2008 crisis. Talks has been on-going in the background to add reforms and buffers on too big to fail banks (tbtf acronym). Politicians in the Eurozone are busy restoring confidence and assuring its public that there is a future in the single currency bloc. Meanwhile, emerging markets are feeling the pinched after they realised that easy liquidity will soon be taken away. The party in the emerging economies are coming to an end as things started to normalise again.
Recent weakness in China economic data paints a rather grim next few months. Over the years, the Federal Reserve has played such a big part in leveraging and somehow indirectly dictating the pace of the global economy. Who would have argued with them when it was the Fed who came to the rescue with tonnes of money to save the day? What is clear to us is the developed countries are heavily in debt and the current new normal is debt infused in its multiple. We now lived in an era of borrowed money that we will have to repay later by us or by our future generation. Our argument should not be treated as a doom and gloom scenario. Changes are being made to amend previous mistakes and it will take time before we see the full result.
With future inflation expectation at all-time low, central bankers have the flexibility to continue printing money when needed. The need for safe haven asset has greatly reduced while the prospect of the Fed tapering and a possible rise in interest rate have sent a strong message to the end of easy money. Despite the negative sentiment, gold holds an important place in every investor’s portfolios. Should the global economy picked up speed in recovery, the large debt burden will need higher inflation so as to sustain such high debt level. Economic cycle of boom and bust will once again play an important role and given the fragility of the current economic situation, another crisis will only favour safe haven assets.
In yesterday’s commentary, we have advised the following and continue to stick with our argument:
…. expect a volatile trading session …. We remain biased on the downside on gold prices but do acknowledge that a bottom is near. The release of the FOMC statement and Bernanke speech could well be the catalysts for gold to move higher given that its recent price action had already priced in most of the negative scenarios. We expect gold to initially tumble hard or retesting previous low before a sharp reversal higher …. Price action is never dull on FOMC days - so helmets on and don’t take silly risks.

We maintained our view from our previous commentary that “The rebound in gold prices must be treated cautiously - rising prices could just be a smoke screen to what could be coming next”. We need to see more evidence of selling exhaustion before taking any long positions. With the rally in US dollar pretty much intact, it is far too risky to buy the yellow metal. Shorting the metal is far more favourable as it could retest $ 1180 and should it break lower, we see $ 1155 as the next target. 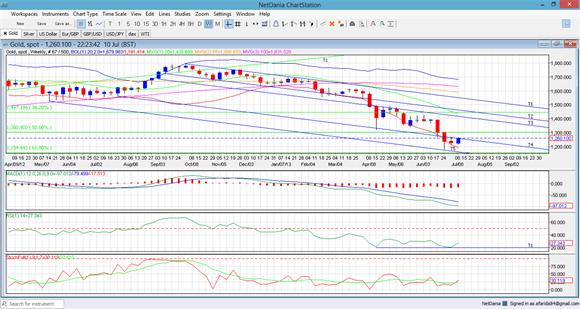 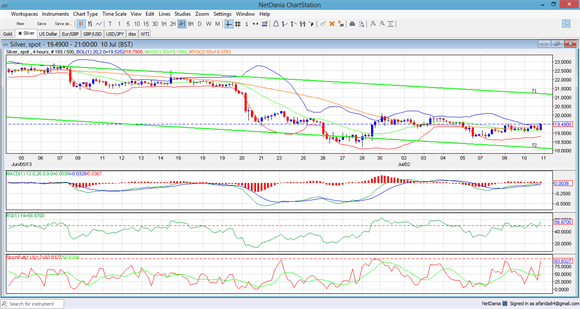