Bullion Round Up
Fed Chairman Mr Bernanke said on his Monday speech that the US economy still has far to go to recover to an acceptable state of health. Looks like our previous commentary on his speech and possibly today’s FOMC meeting minute will remain dovish. The Fed Chairman made it clear on several of his speeches that the economy is growing but not at the rate he would like it to be. The current low interest rate and money printing programme will stay as long as the unemployment rate is not below the target set at 6.5%.

Today FOMC meeting minutes will confirm the dovish remark which may send the US stock market soaring higher in anticipation of continued liquidity juice. It is not hard to guess that gold will not imitate such a rally given all the bearish sentiment it has had. There have been many reports that suggest a shift in asset allocation from safe haven commodities to the stock market rally. The big contrast that lies between the stock market and gold seems to be the rate of participation. Some analysts advised that the stock market is overbought and due for correction while gold remain oversold. Despite the new round of QE programme by Japan, gold did not benefit at all. Instead, it was the European bonds that are bought - driving the bond yield lower.

Given a lower than expected inflation rate, China's government has more room to ease and remain supportive to its local economy. The new SARS outbreak is a major concern that will further spread to other Asia regions, crippling air travel. North Korea continues with its aggressive stance to carry out another nuclear test, instilling unrest in the Asia region. Tension remains high as the Japanese government take no chances and has deployed a missile defence system. Recent Middle East tension in Syria and Egypt must not be discounted as well but for now the global media is focusing on North Korea action.

Gold broke higher on the back of a weak US dollar as well as technical buying and short covering. In addition, gold managed to hold above its previous low at $ 1522 and sellers are under pressure to cover their shorts.

Technically, it is looking healthier with the daily chart showing a rising RSI that confirms strong buying interest. The stochastic fast line maintains upwards trajectory while the MACD is trying to cross higher. This should bode well for gold in the next few days as it will attempt to retake $ 1592 (20 DMA) but it still has a lot of resistance to cross before getting out of the bearish zone. It is critical that the buying momentum continues to push gold above $ 1604 and then $ 1620.

In the meantime, we will remain cautious and wait for another pullback before adding into our long position. 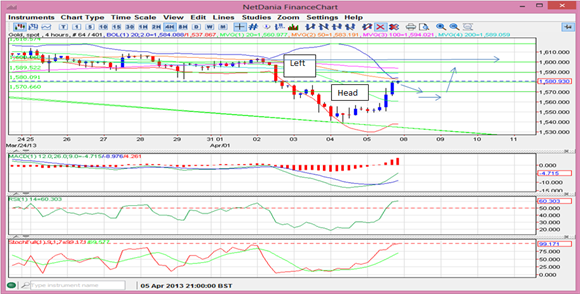 Silver prices moved in unison with gold - upwards. Yesterday, the white metal broke higher on the back of strong buying interest. The rise in price was accompanied by a large volume that confirms the reversal trend. The stochastic fast line as also crossed higher while the RSI divergence help to confirm a bottom is in place.

In the short term, we expect silver to pullback and consolidate its gain before embarking on its current trend. The Fibonacci retracement supports are as follows - $ 27.714, $ 27.60, $ 27.49 (based on this week low). If the current reversal trend holds, silver will have the opportunity to retest the downtrend channel at $ 29.30. At the moment, silver will need to maintain the buying momentum and keep its gain. 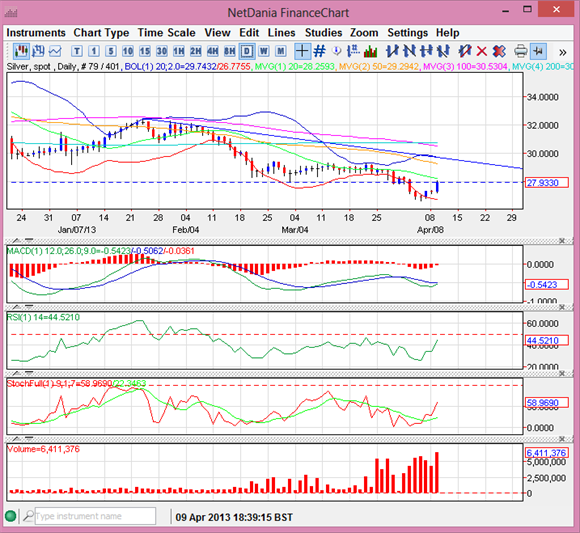