The debate over the Cyprus bank levy on depositors reached global attention and highlights the fragility of banks and governments in handling financial crisis - again. One could have argued that bailing out the banks in Cyprus through levy is no different from the 2008 financial crisis when UK banks were bailed out using tax payer’s money. Does the general public have a say on this? Not really. Do we have any real choice on this? Not really. Are the general public taken for granted? Probably yes. Are we bailing out failures to continue failing? Probably yes. Has anything improved after the crisis? We felt much more immune to bad news and get drug-induced high on a little piece of good news.

It is not so long ago that fear and uncertainty within the Eurozone area reached a climax and it seems that this fear index has plateaued. We have had mostly negative economic data on the Euro area except for Germany continuous good data. However, it is either the negative news being brushed under the carpet or the general EU population reached a certain stage of “I just don’t care anymore”?

This issue is worth looking into as we are experiencing a new economic epidemic that last a lot longer than the previous crisis. On the other side of the argument, we could be facing a quick money stimulated boom too. What is clear to us is that politicians and economists are moving along simply by kicking the can down further as they test with new monetary and fiscal policies in the hope that we may find a cure one day. The world economy is currently in a coma but kept alive with the sweet-juiced up insulin (money printing) to keep it alive. Doctors said the heart (in this case USA) is pumping again but there are parts that remain dead (probably Eurozone).

As the negotiation continues between Cyprus governments officials, gold continues to be a choice as safe haven investments. Initially, gold moved lower after a better than expected US housing data. Then the yellow metal moved higher and took out yesterday high of $ 1611. The new resistance stood at $ 1614 followed by $ 1620 which will be an important resistance to take out. Should gold fail to do so, it remains vulnerable to selling pressure after months of negative sentiments that rock investors’ confidence.

Investors will be waiting eagerly on today’s FOMC statement as well as a speech by Mr Bernanke. Gold price may be dictated in the late European trading hours as speculation and rumours will be rife. Media attention will quickly shift from Cyprus to the US. We expect Ben to be proud of the work that the Fed has done in stimulating the economy and he will continue to do so until the economy can sustain on its own. He will also highlight that better economic data is encouraging and that the stock market rally is pre dominantly normal. We assume that he will not mention about tapering the QE programme. 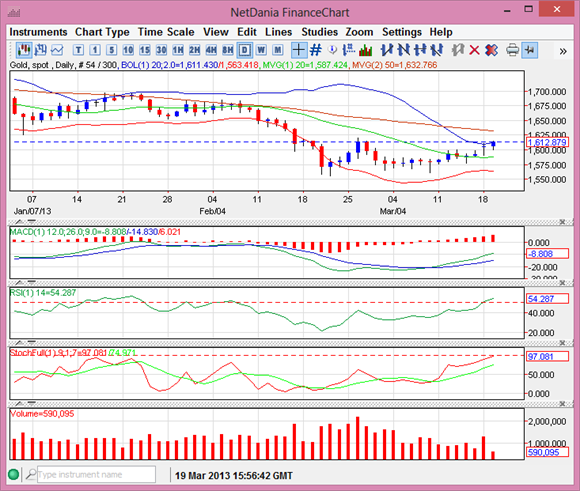 After last week test of support at the low of $ 28.55, silver has reacted rather like a headless chicken. It has not been able to command higher prices above previous March high at $ 29.35. Instead, it has stuck in a wide range of $ 28.50 to $ 29.20 once again. The 4 hourly charts looks rather plain as the stochastic fast line tried to break higher again while the MACD continues to roll flat.

Silver will be a good bet in the long run as the Daily chart paints a rather bullish picture. There has been several positive hammer tails which suggest buying interest exist at $ 28.50 and a bottom is already in place. It needs more buying momentum to push for higher prices and one concern we have is the lack of volume.