Despite a low number of market participants due to Lunar holiday in Asia and the snowstorm in the US, bullion prices moved lower. The lack of physical demand from Asia was the first reason for the weakness followed by the on-going optimistic view that the world economy is on its righteous path of stable recovery. We disagree with the latter and felt that it should have been priced in.

The lack of new economic data this week also put a negative sentiment on bullion as the dollar continues to strengthen and equities performing much better than anticipated. Investors are buying stocks as the risk reward offers a better return which may suggest the lack of interest on gold. In addition, the technical breakout on gold and silver are imminent and traders took the path of least resistance by selling the metals and short selling on any rallies. Technically, we would advise caution and see more weakness ahead as gold look to retest January low of $ 1625 while silver could retest $ 30.00 area.

The rate of UK consumer price inflation remained unchanged at 2.7% for the fourth consecutive month in January despite a big rise in the prices of alcohol and tobacco. Analysts had forecasted an increase at 2.8% but the general trend seems to be holding up. We felt that inflation is set to increase in the next report and felt that there are other prices that have yet to be price in. It is a big worry for the Bank of England as inflation rate is well above the target they have set while economic growth continues to be elusive.

Initial report from the G7 meeting was a possible kick off on “Currency Wars” as ministers and central bankers deny any existing currency wars at the current market condition. Instead, the statement indicates that Japan is merely doing the right thing to stimulate growth and fight deflation. There was no mention of possible spill-over or consequences in the statement and the only take away is that the G7 ministers and governors will continue to consult closely on exchange markets and cooperate as appropriate. Later in another statement, G7 said they are concerned about the excess moves in yen and Japan will be the spotlight at G20 in Moscow.

Short Term:
We remained bearish as long as gold is trading below $ 1652 area and any fake rally is to be sold. The market is prone to dead cat bounce with fake short rally that did not materialise and eventually retesting a lower number. The lack of buying interest suggests that the bear is in full control. A possible retest of January low at $ 1625 could happen in the next few days.

Medium Term:
The yellow metal remains depressed by selling pressure as the stochastic is still rolling in the negative zone. Gold is trading below its 200 DMA ($ 1664.00) - trading close to the bottom Bollinger bands indicate more consolidation in the next few days. At the moment, cautious trading is best as we are treading thin market condition. 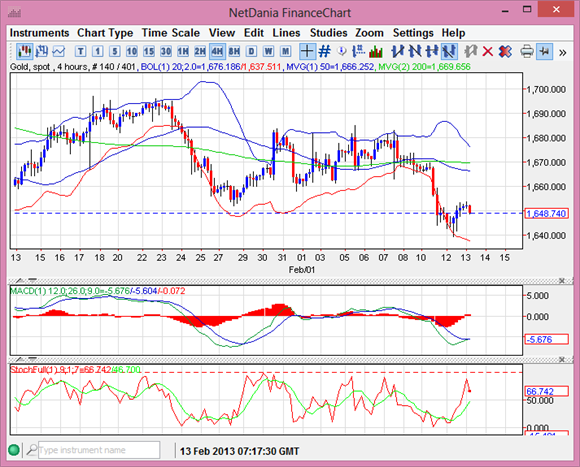 Short Term:
Silver traded lower at $ 30.58 due to a stronger dollar index but eventually found some buying interest that took it back up from the 200 DMA ($30.65) to $ 30.90 area. The short term signal indicate some pause in selling pressure while the stochastic show some buying interest, the MACD remains at the lower negative zone.

Medium Term:
In general, silver may prove to be more versatile compared to gold. It is cheaper than the yellow metal which means that it is a substitute metal to protecting one’s wealth. It also sets to benefit in better economic times since it is also an industrial metal. We felt that silver prices will be well supported in the next few weeks even when we expect more consolidation in the short term. 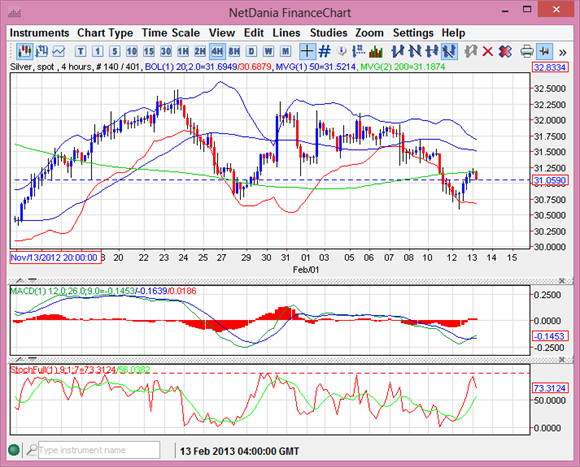