The biggest headline last week apart from a planned strike by Israel on Syria was the stronger US dollar index that sent Japanese Yen breaking free of the 100.00 mark. Shinzo Abe cabinet ministers can be proud of what they have done in terms of massive monetary easing to boost the Nikkie and bring life to the Japanese economy. The fight of deflation is underway in Japan and they did send a rather strong message to the outside world. South Korea government have injected $ 15.3 bln to stimulate economic growth, weakening Korean Won so that domestic goods can be more competitive (think LG, Samsung and Hyundai). We have mentioned in our previous commentary that central banks are all working to ease the global economic constraints with whatever tools they have. Central bank intervention is crucial as the “currency wars” intensified. Money printing in droves has the short term effect and it is benefiting stock markets for now. Some called asset bubble in the real estate industry as well as so much money are chasing after yields. However, many have asked what the consequences are when the liquidity juice ran dry and the bubble pops?

Living under the “New Normal” economy, kicking the cans a little further down (we have kicked many times already) is the way to go for now. We will worry that later in the future is an understatement at the rate that central bankers are easing their way out. The 2008 financial crisis was 5 years ago but the pain is ever lasting with no end in sight. It seems like we are merely moving along, bleeding but patching up with some bandage every time a crisis knocks on the door. We saw how ECB Mr Draghi bulked under pressure to cut interest rate in the Eurozone. He aired his “Djisselboom” view that the ECB could even consider a negative interest rate just to send a strong message that banks must lend and help stimulate the economic growth. After this comment, several ECB policymakers played down the prospect of the negative interest rate. However, Super Mario has once again create the perception that the ECB might do just that - living up to his previous comment “whatever it takes” and “to take further action”.

There is no denying that with global easing comes global growth, albeit only in selective industry. Stock market in general continue to benefit from the money printing programme, companies will hire and produce more. All the reforms and economic policies are slowly trickling down through the economic system but most central banks think that it is too slow and fresh money created continue to start dormant. Banks are reluctant to lend and even if they do, higher interest rate and current economic sentiment raised more concern of toxic debt. The general public are poor and wages continue to stay low. Even when companies are busy hiring (at minimum wage or depressed salary) and produce more goods, there are lack of demand. It is hardly surprising then to see an increase in anti austerity sentiment among Euro members - France, Italy and Portugal who were eventually given more breathing room in their austerity campaign.

Gold took a dive after unconfirmed report that Wall Street Journal cum Fed writer - Jon Hilsenrath was releasing an article on the Federal Reserve exit strategy from the current stimulus programme. The initial rumour was enough to send the US dollar index stronger after hitting a low at 81.81 and rebounded to as high as 83.43. Most commodities index fell with Oil taking a huge beating with other PGMs soared on the back of supply disruption. Gold tried to stand its ground above the $ 1460 area but slowly bulked under the selling pressure as market participants feared the Chairman Bernanke will confirm the rumour during last Friday speech.

Given that “Global Easing” is a blessing for many central banks, gold look poised to benefit in the long run. The current inflation rate remains muted but one cannot deny the eventualities when excessive money printing will start to erode the value of money. The stock market will continue with its rally but this rally may face more headwinds the higher it goes. Gold could soon be an alternative investment again in the very near future even without any economic crisis. That amount of “Hot Money” could once again reinvigorate the slumping ETFs market. 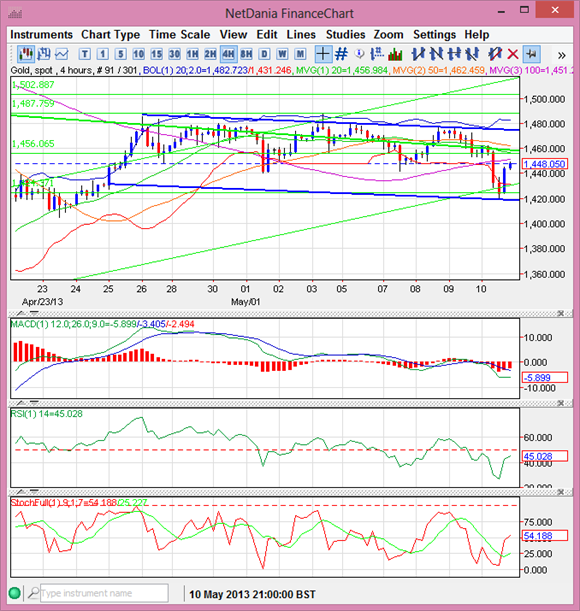 Technically, silver continue to consolidate in the descending triangle formation. A break below $ 23.15 will set off another round of selling spree that could take it back to revisit previous low at $ 22.00. In the short term, a break above $ 24.20 will be favourable for the bull as silver will trade outside of this formation and possibly test higher prices at either $ 25.03 (50% retracement) or $ 25.75 (61.8% retracement). The rebound rally lost its steam and silver has not really performed as well as gold. The white metal continue to consolidate but the longer it take to do so, the more vulnerable it will be for short sellers to add pressure. Technically, the daily chart shows a Bollinger band that is coming closer to a breakout. At the moment, the risk for further correction remains high. 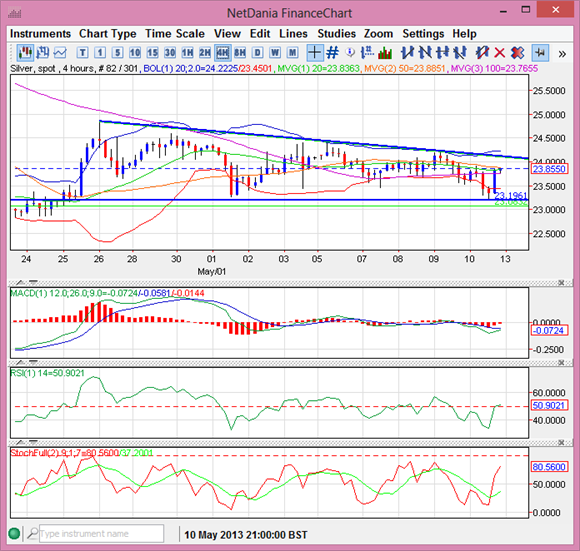