The 1st quarter of 2013 was greeted with positive economic data out of the US. Many economists claimed that there is hope to a global economic recovery as long as the US is growing albeit slowly alongside China. As we enter the 2nd quarter, the economic landscape has changed for the worse and undone most of the positive sentiment it produced from the start of 2013. Low inflation was initially welcomed as central banks can be flexible to offer low interest rate environment as well as to continue their money printing programme. However, continuous low and decreasing inflation has actually intensified a possible disinflation in the US as well as the Eurozone.

The big drop in inflation is the big news of the week and will continue to dominate headlines. Forexlive Ryan Littestone argued that ECB mandate is price stability, price stability and price stability. The drop in CPI numbers will have Mr Draghi leaning more to cut interest rate in the next ECB press conference. With high unemployment, falling growth and falling inflation, Mr Draghi will face intense pressure to cut interest rate. Meanwhile, Angela Merkel might think otherwise but also faced intense pressure to relax austerity plans. The Eurozone faced new problems as the political debate will further intensifies among countries that are struggling with austerity cut apart from Germany.

Old crisis may resurface anytime and new crisis will only add more burdens on the ECB to act fast. Last check, Cyprus remains in dire situation as the Cypriot parliament will vote on a proposed bail-out deal negotiated with the IMF and EU. The plan involves a € 10 bln loan but Cyprus will need to find an additional € 3 bln to avert the current crisis. If the voting failed, it will only send Cyprus back into the headline and chaos may ensue in the Eurozone once again.

Gold prices will remain strong as we draw closer to the release of FOMC statement. There are also ADP nonfarm employment change data as well as ISM manufacturing index that will be closely watched. Traders could remain on the side-line as they anticipate any sign of possible tapering or a change in the tone by Fed officials.

Overnight news, Reuters reports holding in the SPDR gold trust fell by 7.2 tons on Friday and total outflows across major ETFs have reached 354.60 tons this year. Edward Meir of INTL pointed out that the recent rebound in gold price due to significant physical demand could potentially start to slow down. Coupled with the continuous outflow in ETF, gold could face more headwinds as it the current price is inching close to a strong resistance level. One of the biggest worry is that gold could start to break lower and short sellers continue to add pressure. A break below $ 1456 (50% retracement) could easily take gold to a low of $ 1404. However, a break pass $ 1404 will give the bears more control and prices could fall to revisit $ 1325 again. 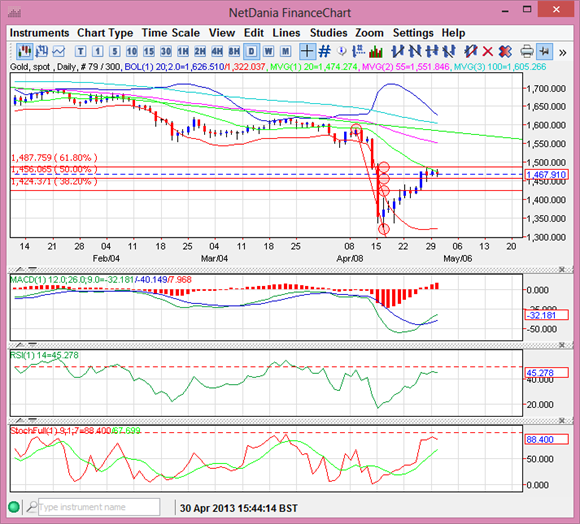 Silver continue to be a volatile metal to trade as it rose in early European trading hours on the back of worse than expected Spanish GDP data but then fell to trade just above $ 24.00 an ounce. CFTC data reveals an increase in silver short which sit at 87% of the record. Meanwhile, silver positioning was cut by 32.8 moz to 75.5 moz as indicated by UBS report. The market remains bearish and this rebound could prove short lived as the speculators are positioning for more price weakness in the next few weeks.
After last Friday rebound, silver may continue to consolidate the recent rise or it could potentially continue on a downward course. We are not sure where the bottom lies but felt that it may retest previous low at $ 22.06. 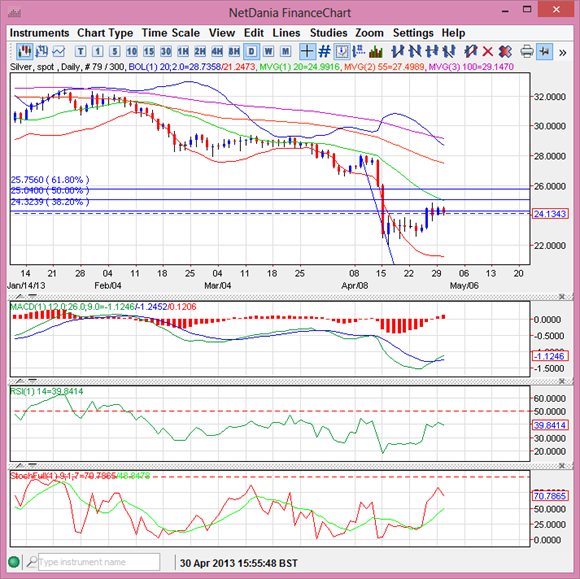