Yesterday Asian trading hours, we witnessed a volatile trading session on gold. Gold managed to break the psychological resistance level at $ 1600.00 but met strong selling as it retraced lower to find support at $ 1587.00 before putting a strong hammer reversal on the hourly chart. Demand in Asia proves to be the main catalyst for the yellow metal to trade higher. SGE gold traded in China climbed 0.5% to 325.18 Yuan a gram and at the current rate of $ 1621.75 an ounce. Meanwhile, demand is picking up in India due to lower gold prices and currently stands at 29,575 rupees per 10 grams. Should prices fell sharply then a stronger demand is to be expected which worries the Trade Minister who may consider increasing import tax on the metal again.

Meanwhile, the political turmoil in Italy could further spur safe haven demand. Italy’s centre left lead by Mr Bersani looks likely to win majority in the lower house of parliament but the upper house remain deadlocked at the time of writing. In the midst of the election, we have seen volatile stock markets that react sensitively and the biggest worries remain on Italian bond yield that is surging higher as market loses confidence. Elsewhere, stock market in Asia and USA tumbled lower. The VIX (volatility index) rose higher on the back of the uncertainty in Italian election that may abandon their austerity drive. US Federal Reserve Chairman said yesterday that the US economy still needs the Fed’s stimulus and warned that looming steep budget cuts could further slow growth. Thus, Mr Bernanke effectively putting a halt to speculation that the Fed could curtail the QE3 bond purchases this year.

However, Goldman Sachs said in their latest report that gold’s price cycle has turned as the recovery in the US economy gathers momentum. They maintain their prediction on the end of the gold Bull Run, arguing that”collapse in ETF positions were likely driven by longer-term allocation rather than short term trading” (source: Bloomberg). GS readjusted their 3, 6 and 12 month forecast to $ 1615, $ 1600 and $ 1550 accordingly.
In addition, COT reports large hedge funds and retail trader increased their bet to speculatively short the market. This adds pressure on gold which eventually break lower. Meanwhile, the commercial traders (Bullion Banks) reduced their short position and take the opposite position to the large hedge funds and retail trader.

Several reports we have come across did suggest that the oversold gold market could have a stronger implication of a major short covering by those who has shorted the yellow metal.

Therefore, we argued that Goldman wants your gold now at a cheaper rate so they can start covering their initial short position (GS used to call for higher gold prices in Q1 of 2013). Could this mean a bottom is near and the bears are panicking?

Dear Readers, we will resume our report this coming Friday.

Short Term:
Whipsawed! The current market situation is not for the faint hearted as gold broke lower after a hawkish comment from Mr Bernanke and then spiked back up after additional comments were made that ends speculation that the Fed may halt the QE programme this year. Prices moved as low as $ 1584 and rose as high as 1620 - taking out several near term resistance. We have once again completed our trade recommendation with a handsome profit.

Medium Term:
The RSI index has risen strongly but remains in the oversold territory. Stochastic has also risen strongly with the fast line crossing above 60.57. The main worry we have is the MACD line that has not crossed positively. Therefore, we remain neutral bearish with a slight upside bias. A break above $ 1621 and $ 1625 will give the bears a lot to think about. 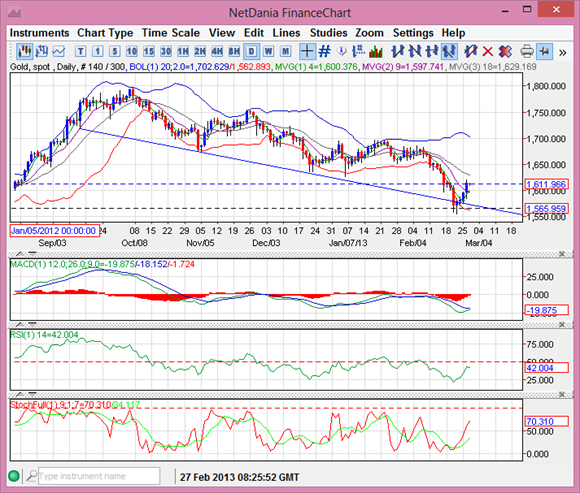 Short Term:
Whipsawed too! As per our last commentary, we suggested that silver is well positioned to move higher but with a slightly cautious tone. The MACD is currently at a positive level and crossed higher while the stochastic still at a strong positive zone. Silver have taken out several resistance level but it need to maintain this momentum so as to retest resistance at $ 29.55 and $ 29.74 area.

Medium Term:
Being cautious in the silver trade always pay off. We were on the side line and did not take any open position. If we did, we will need a deep pocket to absorb the large downward swing in prices before the spike higher. The daily chart paints a bullish view but we urged that silver has to have the same momentum to move higher. It has effectively bounced off the lower downtrend line but the MACD has not converged higher. We remain neutral bearish for now. 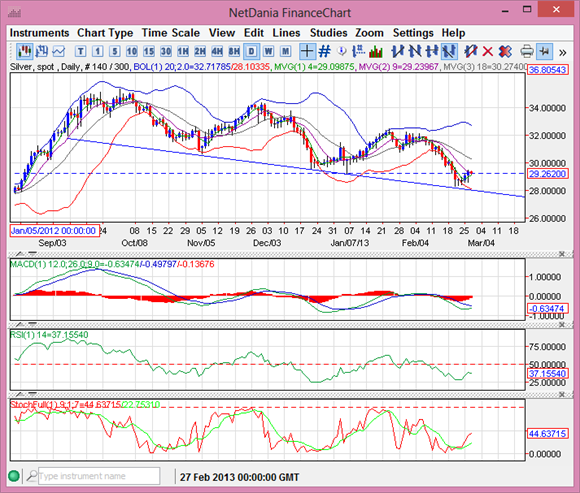