The recent price action in the gold market remains bearish and undoubtedly painful for those investors who are holding it. Negative sentiments continue to circulate as investors fled by liquidating their positions and added selling pressure by shorting the metal as they anticipate lower prices. Outflows in ETFs gold product have been the most significant factor that determines the price of gold. Bloomberg recent report on the assets in SPDR Gold Trust has decreased to 964.69 tons on July 2, the least since 2009. In addition, the Federal Reserve made a clear statement that reducing the QE programme could start as early as September this year - all depending on the next few economic data. The recent economic data from the US has been relatively positive and there were sign in the Eurozone that the worse is behind us for now. The era for holding safe haven asset is coming to an end and many money managers agreed. Expectations and future analysis on gold price has been revised lower, thus adding a self-fulfilling effect that could further dampen the need to own the metal.

On the contrary, despite the fact that gold prices has dropped and its allure as safe haven asset is dwindling, we might enter into a corrective phase for a rebound higher. The increase in speculative shorts have made the case that it is an overcrowded trade and bouts of short coverings are expected before a retest lower. Ultimately, technical traders are targeting a low of $ 1150 to $ 1050 which could well happen in late Q3 or early Q4. Previous low at $ 1180 has given dip buyers and short sellers the reasons for a rebound. Production costs for mining the metal varies between different miners but some are quoting that the minimum cost comes in at $ 1200, which sets the floor for now. Supply disruption is expected as miners continue to lose money and this could well improve prices. Continue physical demand from developing countries such as China, India, Turkey and Russia play a major part. Other economists felt that gold reaction on QE tapering is overdone and the current setup has priced in more than what the market has anticipated.

We felt that a rebound recovery is underway but will strongly argue that this is a short term rebound with strong resistance starting from $ 1300 area and $ 1360 area. Once the rebound is done, gold could continue to resume lower to retest $ 1100.

Contrarian investors felts that gold is over reacting to a better than expected US economic data as well as the talk on Fed tapering QE programme. In order for gold to break higher, a short covering rally could well go underway as we approach the end of the week and end of the month. In addition, the yellow metal is heavily oversold as shown on the RSI indicator. We felt that gold need to find a strong support before it can retest resistance. A retest of previous low or above it could well be the catalysts that show selling exhaustion which will then be followed by a meaningful reversal.

However, we are not expecting prices to break through all the resistance. Instead, it could be a rebound and a resumption of a downtrend. 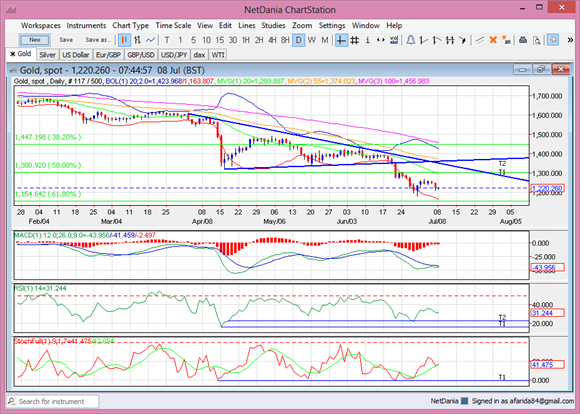 Silver remains under selling pressure and trap within a downtrend channel of a bearish market. A depressed economic situation has not helped silver as an industrial metal. In addition, its price is heavily influenced by gold after all it is considered as the cheaper alternative. Investors favour lower silver prices and we may continue to see it weaken before any rebound rally. In the short term, prices will continue to consolidate and break lower. Unless we see short covering in gold, we can expect silver prices to remain in this downward trend. 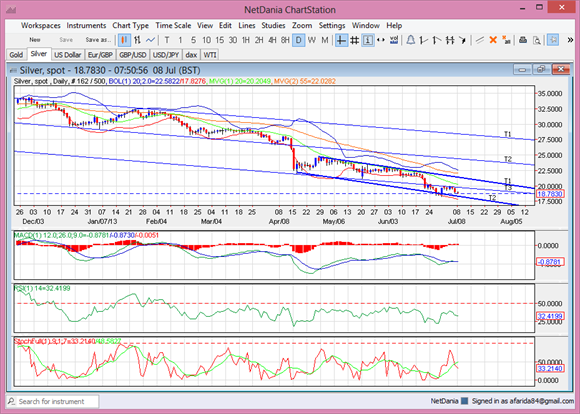