The work of an analyst is often judged by the content and materials he or she has written. Criticism is never far away since every day is a new challenge to dissect what the market might do and market often can be irrational for as long as it could. Over here, we tried to cover the different scenarios that could appear pre and post FOMC. Nevertheless, it is no easy task and we admit that the last FOMC was a shock and awe.

We continue to feel that the tapering effect will fizzle out after the FOMC statement and the next big item will be the US debt ceiling. On that basis, we felt the precious metal will remain well bid as long as it can trade above its support level. We remain cautious of a possible “sell the rumour, but the fact” scenario. With that in mind, precious metal has got rooms to look higher assuming all the other conditions are viable.

Looking ahead, the new Federal Reserve chairman will instil market direction and confidence with easy monetary policy and reduction in QE programme will be an on-going debate. It is not the nail in the coffin for gold bulls as long as the printing press continues. However, the precious metal industry will continue to trade in the mercy of the next FOMC meeting (October 29th-30th and December 17th-18th). Put that down in the calendar folks and get those helmets out again at least 3 weeks before the next Fed press conference. We envisage that the next two months will see no tapering threat until we draw closer to December 2013. Taper will return and this time it might come back with a vengeance.

Debt ceiling debate will now take over as the major headline after the dovish FOMC statement. Bernanke is right to worry about being too early to taper as the labour market recovers and low inflation has always been something he addressed. Low inflation will give the Fed more rooms to remain dovish for now.

Daily Chart
Post FOMC statement, no tapering has raised hopes among the bull camp with heavy short covering among hedge fund and speculators. In order for the rally to continue, new buying has to enter the market given how the other conditions such as the weak dollar index and lower interest rate will remain supportive on gold. Overnight news on India increasing the cost of owning gold soon will fizzle out just like the tapering effect. Tapering will continue to haunt the precious metal market with future release of economic data.

Technically, the 1H chart shows a bullish flagpole formation as of the time of writing. If we see a break above $ 1377 convincingly, we can see higher prices with a potential target of $ 1430. In addition, the 4H chart shows that gold stop at resistance which is the top of previous downtrend channel line. RSI also indicate a bullish divergence as we approach the Fed statement and it seems to have materialised higher. Only a break above and a positive close to end the week will allow more traders to jump into the bull camp. 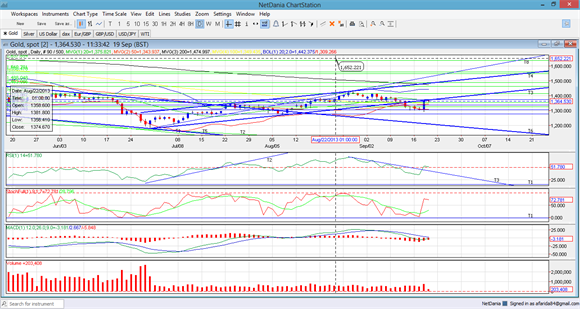 Daily Chart
Just like gold, silver moved higher and having a good rally. Weakness in the dollar index helped propel both gold and silver higher. Daily chart indicate that the reversal from the previous downtrend is in the making. RSI managed to bounce higher above the 50 area while the stochastic fast line crossed higher. In addition, the MACD line could well cross the signal line to the upside in the coming days. Should the price break above $ 23.35, we could see a retest of previous resistance at $ 23.90, $ 24.35 and $ 25.20. 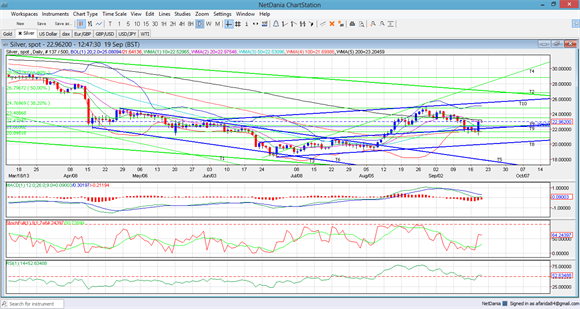