Chinese aunties defy Warren Buffett perception on gold and their purchases are supporting the current rebound. Chinese demand for the yellow metal in physical form is insatiable - given the lack of other investment opportunities in China. Could this all change in the near future as Chinese consumers are introduced to financial products such as ETFs in the near future or has confidence in paper gold eroded? Some argued that the purchasing power in China is tremendous and most sought gold for long term investment such as wedding gifts or as family heirloom to pass to future generation. With real estate prices at all-time high and a stock market which only allow one to profit if it goes up make gold a lot more appealing. However, there was real concern among analysts that this rebound will not last. “Further drops may not spur as much buying because consumers will likely hold off, waiting for it to hit a bottom”, said Larry Cho, an analyst at CIMB Securities HK Ltd in Hong Kong.

What if gold price is a misinterpretation of few in the Wall Street against the masses in the Maine Street? Gold bugs will argue that such distortions have increased over the years after the 2008 financial crisis as one after another; central banks just cannot stop the money printing programmes. However, there is no inflation as wages remain depressed and unemployment remains at an all-time high in the Eurozone area and the US unemployment rate continue to stay above the target set by the Fed. Even if they hit target, Fed Bernanke insists that unwinding the QE programme will be another complications. Global stock market continues to rally higher and making new record.

We have questioned the current Bull Run - QE-fuelled stock market; as to whether it is sustainable at all? It is another caveat for economic leaders to think while trying to move forwards cautiously with any reforms or policies they might implement. What more harm can be done when they are already knee deep in unconventional policies? We will worry that later in the future.

Early Asia trading hours, gold traded as high as $ 1476.60 before breaking lower to retest support at $ 1459.87 - post US jobless claim. The better than expected numbers sent shiver among gold investors and the selling activity took gold down right before the release of the data. Does that mean that certain group knows a better than expected data is due or they are just pure lucky to bet the right direction? Other indicator such as June Crude Oil took a beating as well - which tend to indicate a weaker precious metal. The US dollar recovered after posting a low of $ 81.81 and post jobless claim data, it rose to a high of $ 82.24. All of these add selling pressure on gold and hamper any upside rally.

We look to short gold should it test the following area $ 1490 - 1510 as it has the potential to retest previous low at $ 1325.
We would like to repeat our advice from our previous commentary that the gold market could see possible slowdown in physical demand which may weaken gold rebound. In addition, continuous outflow of funds from ETF only increase selling pressure. Investors who are still holding will be wary of a possible margin call again. 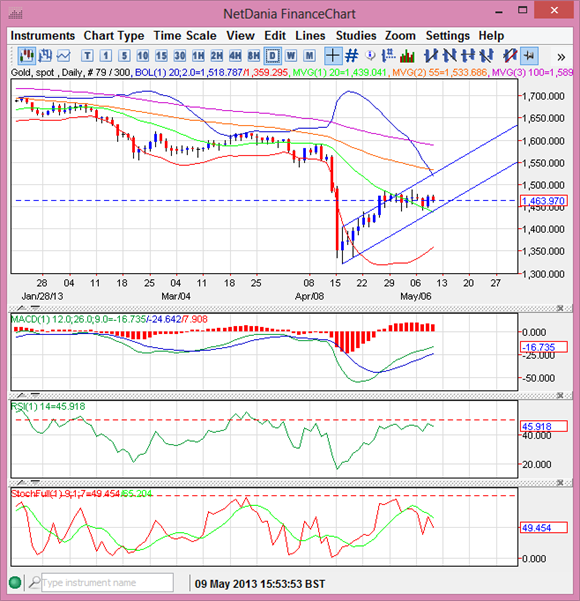 Silver prices could not benefit after the better than expected jobless claim data despite testing a high of $ 24.20 but soon traded lower to retest support at $ 23.73 which held for now. Failure to keep gains and any momentum to trade above $ 24.00 has raised many questions of its ability to break higher. Silver prices suffered as gold did, the strong US dollar index hamper any potential rally. The white metal continue to consolidate but the longer it take to do so, the more vulnerable it will be for short sellers to add pressure. Technically, the daily chart shows a Bollinger band that is coming closer to a breakout. At the moment, the risk for further correction is higher.

We continue to warn that the rebound could be on its last leg and a break below the lower trend line (Daily Chart) could spell more downside pressure on the white metal. The market remains bearish and this rebound could prove short lived as the speculators are positioning for more price weakness in the next few weeks. 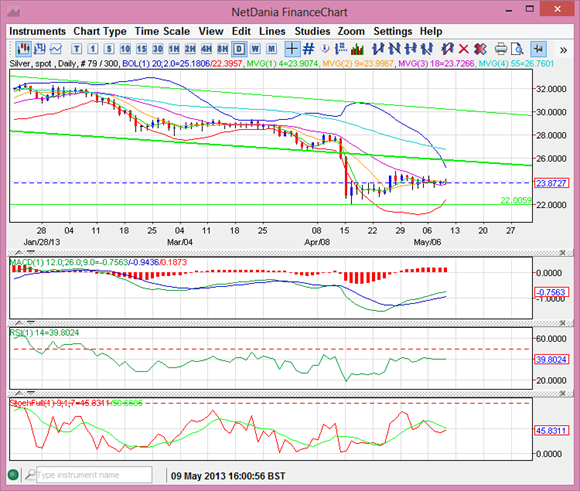