Gold failed to stay above the support at January low of $ 1625 and plunged further to reach a low of $ 1598 during US trading hours. In the last couple of weeks, any positive signs or catalyst on gold remains muted. On the other hand, negative news tends to dominate and exert more downward pressure on the yellow metal. It does seem that no news or signs are good enough to support gold. Does that mean the yellow metal has lost its allure as an inflation hedge tool?

The G20 meeting lasted for 2 days but financial media played down any currency war discussion. The economists covered the benefits of a currency war at length and complimented Japan for taking the right step In addition; they encourage others to look at the benefits that could be garnered if done correctly. Meanwhile, the other side of the camp reiterate that currency war is just another cheap tool for a trade war. Devaluing the currency will help that particular country to boost its export as well as its own coffers.

This week, we have the FOMC meeting minutes followed by US existing home sales data as well as Germany GDP numbers. Today is a US holiday and we expect a quiet market session.

Short Term:
Gold took out its last support at $ 1625 which was January’s low. As per our last commentary, should the yellow metal fail to hold on to $ 1625 then we could revisit $ 1600 and it did. After the selling climaxes, prices managed to recover to $ 1610 but the real test will happen this week as the Chinese are back from their week long lunar break. The metal remains weak for the next few days but bargain hunters are on the prowl. We expect choppy consolidation phase.

Medium Term:
The daily chart paints a consolidation phase that is setting in after the selling climaxes. The MACD albeit is still in the negative zone, it looks oversold at the moment. Meanwhile, the stochastic has crossed higher suggesting some buying interest at the current prices. Prices retraced back to last August low of $ 1590 area and may continue to do so until a strong support can be found. Choppy trade ahead but expect that these prices will generate strong buying interest. 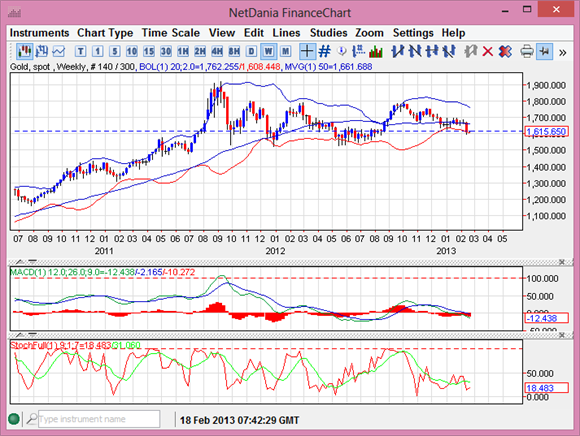 Short Term:
Prices broke lower last week and take out the psychological level at $ 30.00. We did warn that any rallies are to be sold. At the moment, silver look heavily oversold but the selling pressure remains and look well place to retest January low at $ 29.25. There is support at $ 29.63 but once that is given away then we will revisit $ 29.25.

Medium Term:
The daily chart looks broken and remains weak. Prices retraced back and the next support at $ 29.25 could be pivotal. Last year August, silver prices broke higher after many runs close to the bottom end of the Bollinger band. It spiked to $ 35.00 level and has ever since retraced back. The MACD rolled to the negative zone and the stochastic has not cross higher. We remain bearish on silver for now. 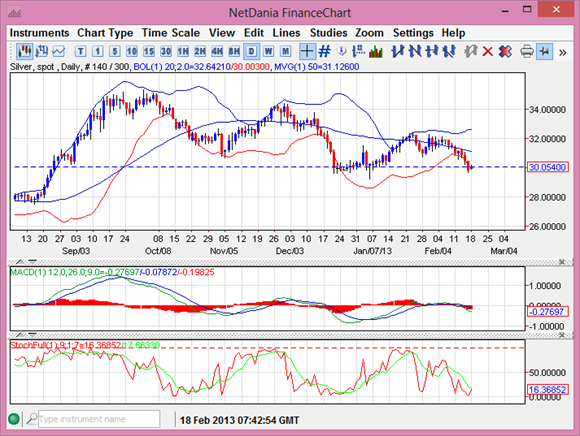