Other catalyst includes the statement by RBA governor Mr Stevens who suggested that “an accommodative stance of monetary policy is appropriate as inflation is likely to be consistent with target”. Fed vice chairwoman, Janet Yellen also reaffirm the importance of stimulus spending and confirms that central banks intends to “keep monetary policy highly accommodative until well into the recovery”. BOE, BOJ and ECB will also hold press conference this week with a possible discussion on additional stimulus. Stock market in general has rallied on additional stimulus talks. Mr King of BOE has already expressed his interest to increase the current stimulus programme. We would not be surprise if the BOJ press conference is a copy and paste from the other previous headline to weaken yen further and target a 2% inflation rate.

The question remains if all of the above catalysts are sufficient to justify a higher gold price? We felt that investors should initially ask if we have reached the pivotal bottom in gold before asking the above question. It looks like gold is still biding its time and should the above setup turned gold supportive (which we think it will), then gold bears have a lot to think about. As per our previous commentaries, we highlighted the other potential catalyst of short covering that may give gold the edge to rally higher once a price bottom is obtained. Technically, gold may retest the previous low at $ 1555 or $ 1535 before a sharp V reversal to mark the end of the bear control.

Short Term:
With the Dow hitting new record all-time high, gold trading remain capped in a tight range of $ 1570 to $ 1585. Initially, it traded higher on the back of a “Global Stimulus” programme by central banks as well as lower US dollar index. However, we did mention in our last commentary that prices are capped to the upside and unable to break that 38.2% retracement level. This confirms that the bear is still in control and we expect prices to consolidate and a retest of quality support seems imminent.

Medium Term:
Gold is still trading at the bottom end of the downtrend channel line. It is a major concern as it fails to have any traction to rebound from this area. Instead, it is still consolidating after the bear flag. Should prices break below $ 1570, selling pressure will increase and a retest of $ 1550 is possible. 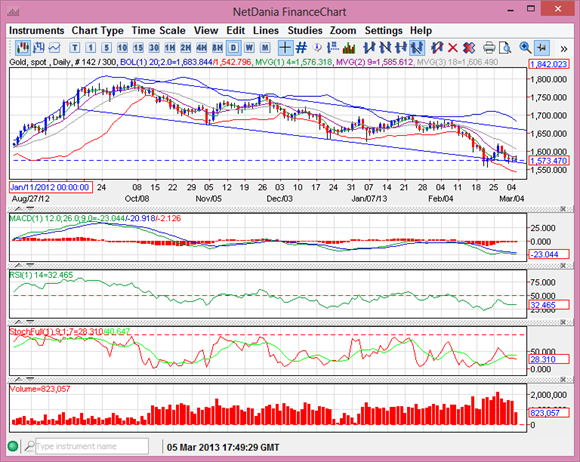 Short Term:
Silver traded higher but unable to sustain any of its gain. As of the time of writing, silver break below the first line of support at $ 28.64 (38.2%) and now holding on at $ 28.58 (50%) level. The next support lies at $ 28.37 and should that break lower then we will revisit March low of $ 27.93 again. With the stochastic fast line pointing lower and the MACD crossing to the negative zone, we expect selling pressure to persist.

Medium Term:
The shooting star on the daily chart signals that the bear won the fight. The bull tried to push prices higher, creating the large upper shadow but failed as prices return to where it starts. For an instance, there was a glimmer of hope that silver may break higher with the MACD converging closer. For now, we expect more consolidation ahead. 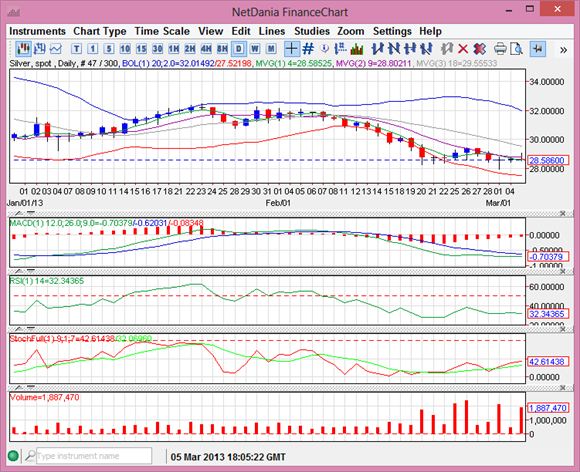