Bill Gross - the bond king says to buy gold as inflation hedge. He argued that while loose monetary policies and money printing will continue for a while, at some point it will have to stop. Gross sees trouble brewing in the artificially priced US Treasury market. There are other supportive fundamentals on bullion such as China import record amount of gold in 2012, continuous buying from Russia, German repatriates its gold, ultra-low interest rate environment and last but not least currency debasement that could spark currency wars. The irony is that gold price remains capped and some analysts argued lack of catalysts are the major cause. Technically, both precious metals are set up for a potential breakout.

On the economic front, we have a host of economic data for the UK and European market. The ECB press conference will be highly anticipated. Market expects Mr. Draghi to stay on course with no changes from his previous notes despite the hint of a possible cut in interest rate. In addition, there is US Nonfarm productivity (QoQ) and US weekly initial jobless claims to be publish. Meanwhile, PM Abe encouraged companies to increase basic salary and play down the fear of hyperinflation. With the dollar index rising, JPY last traded at 93.70 bolstered by the announcement that Bank of Japan Governor Mr. Shirakawa is due to step down on March 19. This will allow PM Abe to appoint a candidate who shares his view on monetary easing.

Short Term:
Gold price remain unsettled after a bout of volatile trading range between $ 1665 and $ 1686. Technically, the 4 hourly-chart suggest that gold made higher lows and stayed well above the ascending trend line. However, the upside remains capped at $ 1686 and only if prices break above then the next resistance will be $ 1697. Stochastic is pointing lower which suggest selling pressure while the MACD is rolling flat. A break below the ascending trend line could have bearish implication.

Medium Term:
The daily chart shows that gold is trading above the 200 DMA ($ 1663.68) support. Bollinger bands suggest that a potential breakout is near with a slight bias to the upside. A break of $ 1686 and $1696 will allow us to be more bullish. CFTC report also states that we are close to record high on gold short position which may indicate a limited selloff. Any violent price breakout to the upside will only trigger more short covering. However, the jury is still out with regards to when this may happen and if gold still need to test several support levels. 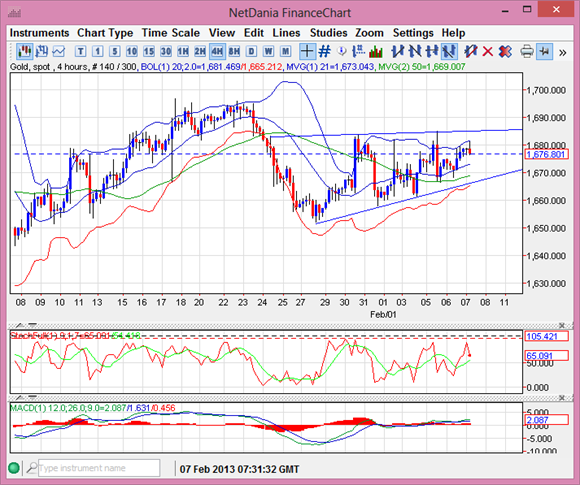 Short Term:
There were 3 successive high made on silver prices that were descending ($ 32.46, $ 32.27 and $ 32.10). The Bollinger bands are closing in again which suggest a growing pressure of an outbreak. Take note that prices remain capped on the upside while recent trading has created a higher low. Stochastic is attempting to cross higher but MACD remains flat (basis on 4 hour chart). Such mixed signal suggests staying on the side line is best and only act once there is some direction.

Medium Term:
The daily chart stochastic has crossed higher but still vulnerable to the downside if selling pressure emerge. MACD remains flat - giving no strong indication or direction. We maintained our neutral bullish stance on silver and look to target $ 32.47 and then the 2012 - 2013 resistance line at $ 33.29. 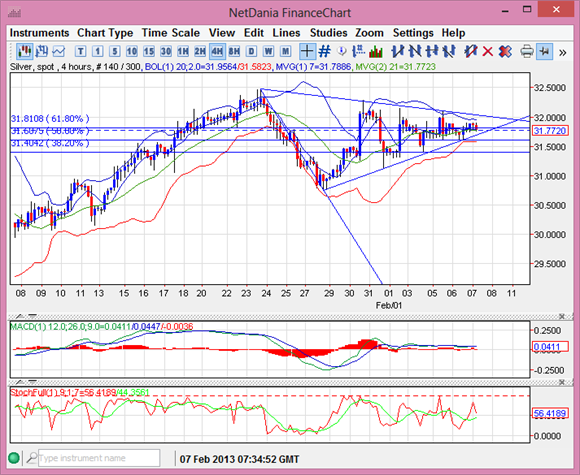