The prospect of an early end to the possible war in Syria looks deemed - similar to the prospect of stabilising emerging market economies. In times of geopolitical and economic uncertainty, safe haven assets shine while equity market faltered. As we approach September, tapering has already been priced in but some analysts argued that global equities are slow to react and only now that they undergo some correction. Unfortunately, deeper correction has yet to come and we could see more of it. Meanwhile, the one sided trade to sell bullion in the paper market has changed course with investors becoming dip buyers and sellers covering their short position - earning a handsome profit on the way down and vice versa.

Physical demand is the solid foundation to support prices which was not reflected during the huge outflow of gold backed ETFs. However, things are changing as we see an increase in inflows over the last two weeks. In addition, central banks continue to accumulate physical gold bars as a way to diversify. China, India and the Middle East demand has grown as long as their economy is growing and we are also seeing demand from other emerging countries that face severe currency devaluation. Investors in those countries will look to own gold as a way to protect their wealth and we continue to stress the importance to do so.

Looking ahead to September, the dollar index could gain some upward momentum as long as the economic data are good. Tapering will happen but the amount remains a mystery. The war in Syria could come to an end near to the end of the month unless there was other intervention. Gold and silver could consolidate and find good support before another attempt higher to the end of the year.

Our main concern lies with the beginning of an end to this corrective rally on gold and silver. Gold has managed to rise higher after support at $ 1270 held and advanced $ 140 dollars. Meanwhile, Silver advanced has caught many by surprise as it posted higher highs but it is also due for a corrective move lower.

The run up higher has been impressive given the extreme one-sided negative sentiment on both the safe haven metals. Both metals put up a well-run contrary trade should an investors bought at $ 1200 level. The current setup calls for another impulsive move higher and then a corrective A-B-C move lower. As long as gold managed to hold above $ 1300, it has got the chance to test resistance level at $ 1500 after the corrective move. Our only concern is a possible bullish resumption on the US dollar index and September tapering that could stop the current rally.


Traders Notes: Previous long position from the breakout (1385) has been trimmed. 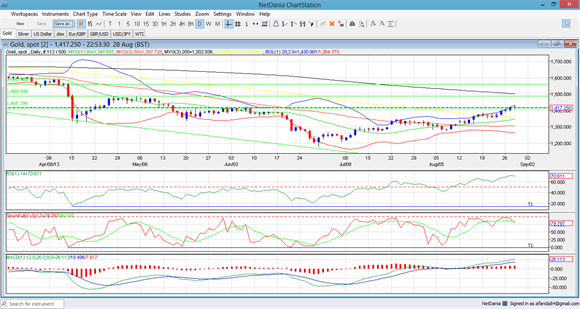 The white metal has remained resilient despite several attempts to push prices lower. A better than expected economic data out from China and Eurozone has allowed the bulls to support and aim for higher prices. Should it pullback from here, the market will remain healthy and allow more rooms for bargain hunters to re-enter and add on their long positions. That is based on the assumptions that gold prices could head higher which could then support the white metals. Given the increase interest in bullion again, silver may well have more rooms to the upside before the pullback. 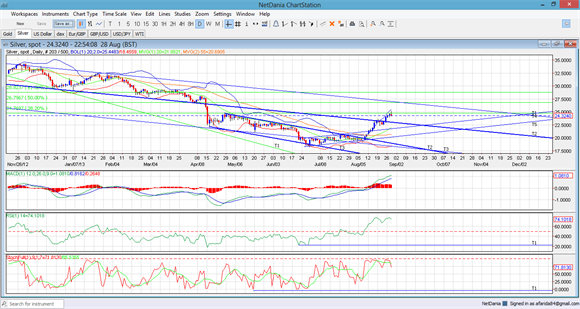