Gold and Silver was the old playground for hedge fund and retail investors - they have now move on to another exciting ride which is the stock market. Is this the beginning to the end of the decade long Bull Run on gold? It remains an open question but the current market condition favour the end of this Bull Run and market is consolidating the recent event. The bear market has the upper hand and we are not surprise if gold is entering such era of lower high and lower low. Social media interpret the current bloodbath as “flushing out weak hands” and yes, there are many of them around.

Ever since the 2008 financial crisis, physical gold bars & coins, stocks and ETFs were bought in a mad rush for safety. The liquidity rush from savers as well as the QE printed money enters the gold market in hordes. It is not surprising then to see those leaves in hordes too. The great asset reallocation is the beginning of an end to the Bull Run on gold. Banks and governments hate to see large amount of money tied up on the yellow metal that does not give yield. Those newly printed money have to somehow find yield and with the price drop, it help to set a perception that money in gold could be better use in the stock market. Therefore, it is our assumption that the banks and government colluded to bring down the price of gold so that the liquidity can benefit the economy as a whole.

Gold bugs are heavily exposed and constantly being attacked in every direction as prices continues to tumble. Price action seems to dominate the entire field of engagement and dictate who win most of the grounds. The bears are able to throw additional selling pressure in the form of a 400 tonnes or $ 20 billion of selling on COMEX. There was muted response from the bull camp as there were no strong buyers. Instead, most seems to jump ship and join in the short selling to hedge their open positions. This only exacerbated the drop in price and the short sellers remain in power for most of the day. There is a strong conviction from the short sellers as they try to make a big point. Crushing the bull camp is not the main objective but pulverizing hope is.

A picture tells a thousand words. Therefore, the chart below helps summarise our analysis in one simple word - Liquidation! With prices dropping like a brick, the weak hand investors are fleeing the market but most are told that their positions have been liquidated. Margin calls pop over all over the trading accounts and investors scrambled to cover their losses. Sentiment grew from a possible rebound from Friday’s close of $ 1479 into panic selling that eventually dragged gold to a low of $ 1385.

In our last commentary, we have advised cautioned and will continue to stick with it (see below) - However, gold buyers remain sceptical and maintain a cautious view on another gold rally. The sentiment has grown from bad to worse since physical buyers will wait till the dust settles. It is always hard to catch a falling knife and best to let the market stabilise before placing any positions.

The market will remain turbulent and volatile. This week, gold remain at risk to a possible drop in price before finding a reasonable rebound (a dead cat bounce) before further selling to determine a bottom. 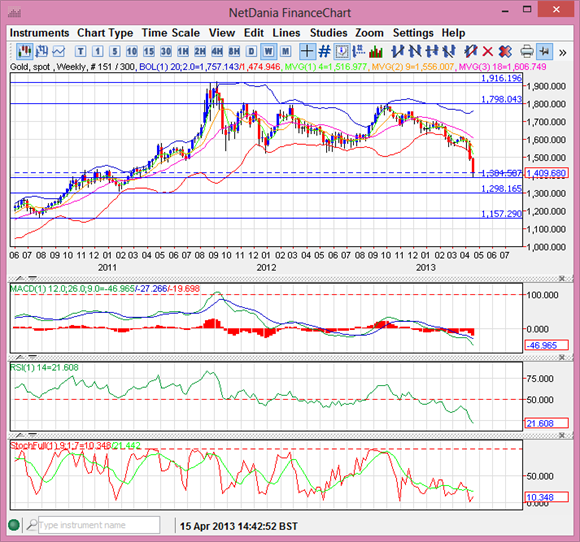 The volatile white metal has not failed to put in a spectacular price movement. Silver continue its downtrend channel and the metals were heavily sold during the early Asian trading hours on Monday. The selling never abated and eventually found a support at $ 22.96 area where it rebounded to $ 23.58. Another grim day as silver buyers was nowhere to be seen. The prospect of the white metal to rally seems unlikely but a bottom is due. We will not guess how big the damage will be but mainstream media have suggested that silver could retest previous low at $ 24.00 and in worst case scenario back to $ 19.00 an ounce.

It is impossible to suggest where the bottom will be but staying on the side-line is a better option. 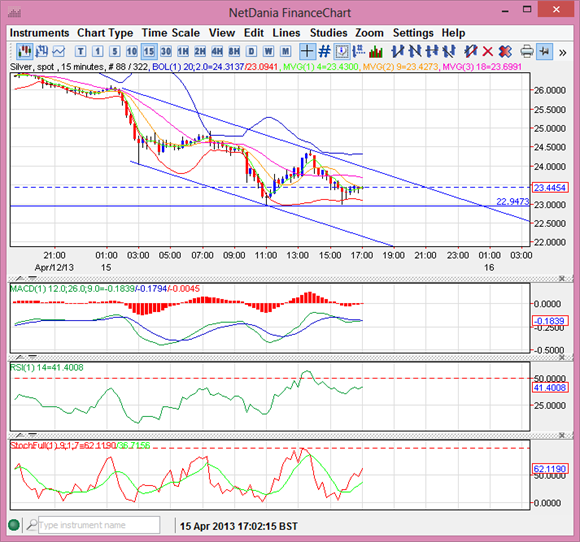