Starting from today till the end of the week, we anticipate the market to pick up more volatility as traders wait for more direction from the Federal Reserve meeting minutes, BOE and ECB press conference. Down south, the RBA continued to talk down the strength of the Australian dollar and hint that reduction in interest rate could be the way forward given the current inflation rate. Global central banks continue to talk down the strength of their currency in the hope to stimulate their economy. Markets have barely recovered after the 2008 financial crisis and continued easy monetary policy needs to be in place. In addition, due to increase fear of a slowdown in demand from China and other emerging economy. A strong currency will not help the export dependent economy such as Australia in this case.

The highly anticipated FOMC meeting minutes might shed more lights as to who could replace current Chairman Ben Bernanke. Two possible candidates that has been hitting the headline are Larry Summers and Janet Yellen. Miss Yellen is the favourite to win but government officials and other Fed members may think Mr Summers have the credibility. Instilling a successor is important as it will give the market more assurance and stability. Current market sentiment remains mixed but most have priced in the effect of tapering but not the size. The meeting minutes may provide more clues and investors remain vigilant to good or bad economic data. One thing for sure is that tapering is no longer a stranger in the current new normal market. Global equities continue to enjoy all time high and managed to hold on most of its gain. The bullish camp made the argument that US economy will lead the way to recovery and a stronger US dollar is in the process. Tapering down on QE improve sentiments that the equity market can stand on its own. Meanwhile, there were those in the bear camp which said recovery is an overstatement and argued that the current setup is “sugar-induced” by QE and unwinding this policy could mean catastrophe.
Looking outwardly, the global economy is sputtering with emerging market slowing down while the developed economies heavily bandaged and on the mend. It would be wise if market optimism is kept controlled because the current system cannot take another shock. This time it is different because the disposable QE and other tools have been used to revive the economy at all cost. Falling into the death trap again will be unwise.

We will remain vigilant on the US dollar index which has suffered badly and it has found support from its daily 200 MA at 81.49. Investors remain interested to bid the dollar higher and maintain its uptrend resumption as long as the Federal Reserve is committed to taper. We felt that as long as gold continue to trade above $ 1300 or even a retest of $ 1270 - the bullish uptrend line can continue. If gold can maintain this run and failed to break below $ 1200, we will make the call that $ 1180 is the bottom for a foreseeable future.

The recent price action indicates that investors’ sentiment has changed to a neutral stance after months of selling. A slowdown in ETFs outflow suggests that sellers are exhausted and a consolidation is setting in. Hedge fund managers are increasing their bets on higher gold prices on the assumption that the Federal Reserve may have to do more to prop the ailing economy. In addition, a slowdown in China economy may encourage government officials to revive easy monetary policy to avoid hard landing. The Eurozone economy faced bigger uncertainty and this week ECB press conference may shed more lights into the possibility of reducing interest rate to below zero.

Technically, a break below $ 1318 will take gold to retest minor support at $ 1315 and $ 1308 but a failure to hold on support at $ 1290 could seriously impair the rebound rally and downtrend resumption can continue. Only a break above $ 1340 and $ 1347 will encourage more short covering and generate more buying interest. However, we remain bearish as long as gold is trading below $ 1525 area and see a period of consolidation before resuming on its uptrend. 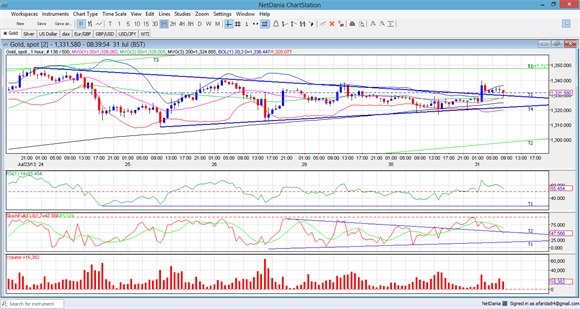 Despite the US dollar weakness and strength in the gold market, silver could not move higher and remains trapped below $ 20.00 area. Technically, the daily MACD has risen but continue to trade in negative territory and prices have failed to break above the upper downtrend line for three times. RSI and stochastic has also shown downside momentum - suggesting more consolidation and downside risk to come. Support comes in at $ 19.25 and $ 18.71.