Gold and silver started this week on a weaker tone as prices continue to be under selling pressure. Both metals broke below key support levels without a fight as bearish sentiment dominates and buyers are nowhere to be seen. Rebound rally is short-lived and any rallies are to be sold. Bloomberg report confirms that Hedge Funds have shifted to their bearish stance on the precious metals. Analysts from top banks continue to revise their price projection lower from their previous publication. They provided similar reasoning such as the lack of demand for safe haven assets, low inflation numbers, Fed’s tapering, better yields elsewhere and the fear of rising real interest rate. At the moment, we are bearish on both metals - a retest of lower numbers is possible.

Meanwhile, several swing traders view the following area at $ 1250 to $ 1260 as a reasonable short term trading opportunity to buy gold for corrective move that will not undo structural damage. While the technical traders are aiming for a lower number such as $ 1150 to $ 1050 before a reasonable rebound can be seen. The bears remain in control and with lack of any physical demand, investors see no reason to buy but waiting for lower prices might be the best option. In the short term, gold could retest lower number before we could see a pick-up in demand. Technically, a retest between $ 1220 and $ 1260 is possible as the following area offer good support. David Govett of Marex Spectron summarise the market as follows:
“As I said yesterday, I remain a seller of rallies and we have now twice seen the price move above 1300 and fail in as many days. As long as the global situation remains the way it is, I see no reason to change strategy. Physical buying is not abundant and quite frankly at this moment in time, there are no real reasons to be long of precious metals. However, there is very little interest out there at the moment and this should keep prices range-bound for the time being.”

On a separate note, several Fed officials are playing down Mr Bernanke FOMC speech on tapering. A Bloomberg article quote that Richard Fisher, president of the Fed Bank of Dallas, said investors shouldn’t overreact to the central bank’s plans to reduce the pace of asset purchases, in an interview with the Financial Times published on its website today. This week will see speeches from Bank of Atlanta President Dennis Lockhart, Bank of Richmond President Jeffrey Lacker, Bank of Cleveland President Sandra Pianalto and Bank of San Francisco President John Williams. Comments such as the above could easily affect the dollar index and may give the equity market some breathing space from the sell-off.

After a weaker than expected start, gold continue to break lower as the short sellers tried to take gold to test previous low at $ 1269 area. Sellers continue to dominate the marketplace since there is a lack of physical and paper gold buyers. Physical demand has not reached the “insatiable” level that was made back in April sell-off. We maintain our bearish view on gold and the selling to continue a little longer. In a healthy market, the sellers usually will face exhaustion and we felt that the gold market soon consolidate before any significant rebound. The new low is set at $ 1269 but we felt that the market could retest low before a potential rebound. Only a break above $ 1325 will give bulls some comfort but we see a potential low at $ 1250 for now. Otherwise, we felt that a major short covering could be on the cards if the situation allows. 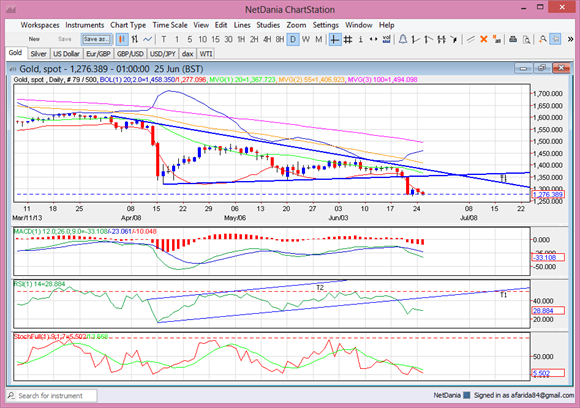 Silver remains under selling pressure and trap within a downtrend channel of a bearish market. A depressed and low growth economic situation has not helped silver as an industrial metal. In addition, its price is heavily influenced by gold after all it is considered as the cheaper alternative. Investors favour lower silver prices and we may continue to see it weaken before any rebound rally. Should we see short covering in gold, we can expect silver to benefit from a relief rally but a continued downward trend will continue for now. 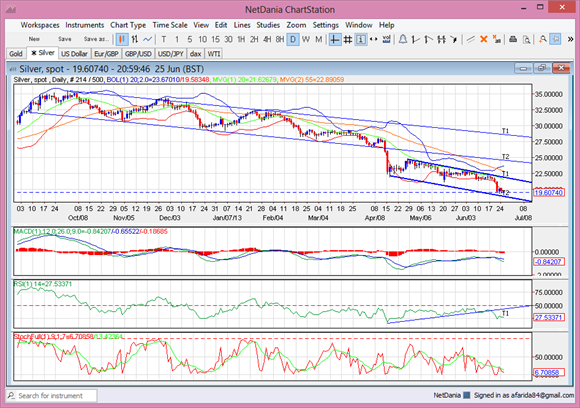