Gold & Silver; September Sale is On!

The only reason why we have chosen the above headline is due to the possibility of a pullback in both gold and silver. Investors get a clear memo that the Federal Reserve will taper regardless of the weaker NFP numbers and the question now is how much? At the moment, market chatter put a range on the taper around $ 5 to $ 20 billion dollars. The higher range will be detrimental on the current gold price that has got few supports. Head of Commodities of Emirates NBD said that a $ 5 billion reduction represents a token of reduction, a more face saving measure but the $ 20 billion will be a “Bazooka”. Fading tension in a possible war as long as Syrian government hand in their chemical weapon could send gold lower as demand for safe haven eased. Physical demand from Asia has slowed down after its recent corrective rally. Instead, selling in Japan and Indonesia is reported in Reuters gold article. Selling in gold backed ETF has also slowed down but the lack of interest or new funds in ETF is hindering higher prices. New buyers are needed to sustain the current run higher.

Standard Bank report argued that tapering could be delayed till December, which could then allow buyers to set up new longs. Another scenario is for gold and silver to pullback as we draw closer to FOMC meeting. As per our last commentary, we see a small pullback and then a bullish resumption as long as prices managed to stay above the uptrend line at $ 1350. In addition, a pullback to $ 1338 will still be healthy but less bullish. Despite that, we favour going long at lower prices. We anticipate an increase in market volatility and the market remains in tenterhooks about the amount of tapering that will be carried out. We argued again that tapering effect will fizzle out and make way for a bigger headline such as the potential Syria War and US debt ceiling.
We are making the case that in the short term we see continue pressure on the downside on gold and silver but both will find support before resuming higher. Both market seems to setup for “sell the rumour, buy the fact” scenario.

Daily Chart
Gold continue to trade in the uptrend line while undergoing minor correction. Only a breach below the lower uptrend line will give the bears more ammunition to head lower. Despite that, we argued that the pullback will be limited and as long as new fresh longs enter the market again then gold has the chance to rebound. Bollinger band is contracting, showing a reduced volatility in the market but this also setups for a potential breakout as we draw closer to FOMC meeting next week. We advised caution and buy on the dip for now. 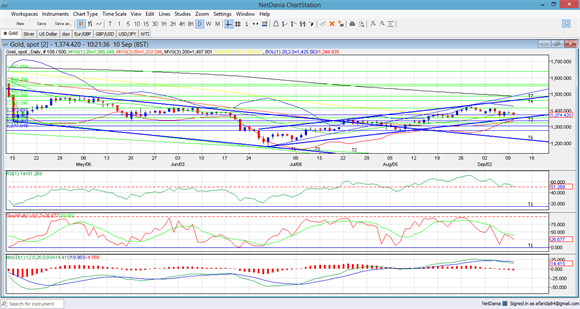 4 hourly Chart
Lower high and potentially lower low could be in the making in the silver market despite a positive economic data from China. Failure to hold above $ 23.00 will trigger stop loss from longs and next support stands at $ 22.85 and $ 22.50 area. Our weekly commentary argued that it could go as low as $ 21.90 level if the sellers push hard and given how volatile silver is, we are not surprise if it achieve it. The technical chart shows that RSI is hovering lower now and there are a bit more room for further downside should it breach key support level.

Traders Notes: Buy if break $ 24.40 and add on the break of previous high. Short trade has hit stop that was moved below breakeven. New short if it breaks and close below $ 23.00.