Run a search via Google for sequestered, you get synonyms such as secluded - retired. It has been for a while now that the gold and silver community felt sequestered for several reasons which was heavily bombarded via the media. Over the past few weeks, we have argued back and forth on gold’s fundamental and technical issues. We believed that the fundamental remains strong but technically it is damaged. However, the last two weeks have shown a slight change in sentiment as gold weathered strong US dollar as well as rising stock markets.

Gold is consolidating after 5 months sell off momentum and a bottom could have already been in place at $ 1560.00. We will not deny that it is still vulnerable to downside selling pressure which could retest previous low at $ 1555 or worse $ 1525. However, the recent price development has been rather encouraging. Yes, gold prices fell post better US economic data but we also witness light short covering and sellers look exhausted. Large volume in gold and silver seems to indicate that buyers eventually absorb the selling pressure.

We draw our readers attention on the US dollar index (see chart below) which could well support a higher gold prices. Drawing other factors, this includes a possibility of a stock market correction that may move liquidity into gold again. We also think that in light of a higher than normal speculative short position taken by the non-commercials, any potential short covering action will give investors a slight bullish biased on gold prices.

As the dollar index weakens and it has got rooms to further weaken, bullion prices will remain supportive. 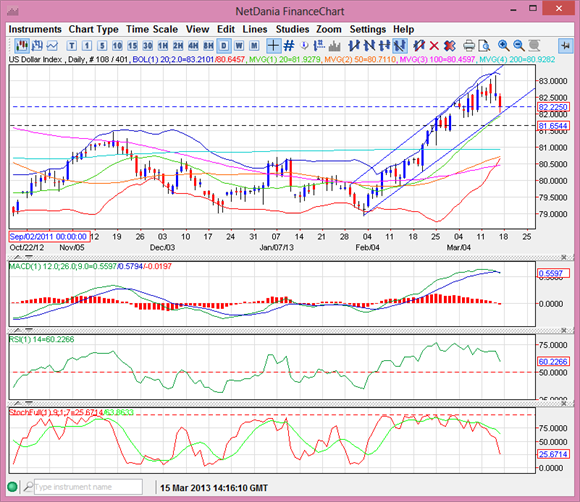 Last week, we witnessed a steady and higher gold prices. It completed the second weekly gain and as Bloomberg reported, assets in gold backed ETF rose for the first time in five weeks. Spot gold is supported as global sentiment lean to more quantitative easing as well as an easy monetary stance in the near future.

Economic data from the Eurozone does not paint a very encouraging picture as several euro countries face the same problem of slow or no growth and high unemployment number. The EU summit felt that the euro crisis is contained for now and attention should be diverted to improve growth. The biggest discussion in the next few weeks among euro leaders could include “less austerity and pro-growth” policies. Gold moving data to watch this week include German Zew Economic Sentiment and February US housing starts on 19th March, US FOMC meeting on 20th March, Flash manufacturing PMI for China, Euro and US on 21st March.

The daily chart signal a rather encouraging development as the stochastic fast line crossed higher and the MACD pointing in the right direction. RSI has picked up too over the last few weeks, indicating buying interest at the lower prices. As gold prices trade above the 20 DMA, it could soon mount an attempt to conquer $ 1600.00 and target $ 1620.00. 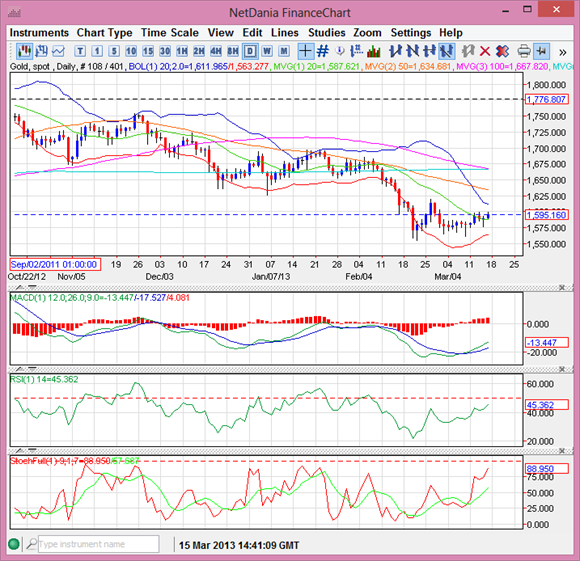 Silver prices continue to attract bargain hunters to buy in the dip after last week retest of support. We remain neutral bearish on silver given how volatile the trade can be. The past few weeks, we have witnessed several whipsawed moments when prices rallied hard and returned all the gains made.

We stick to our previous analysis that silver may further consolidate and will change our neutral stance should it cross above $ 29.40 area. Daily chart shows the stochastic fast line trying to cross higher and the MACD is still rolling in the negative zone. Currently, we pay closer attention to the Bollinger band which is getting tighter and indicate a breakout is imminent.