It is beggar’s belief that in a world of low interest rate, continuous money printing and political tension in Israel and N. Korea - we witnessed a massive and coordinated selling on precious metals simply because there was no inflation in the western countries. Inflation is a time bomb with no definitive deadline and we have address this argument before that it could well be the next catalysts to push the precious metal higher. We suspect that further selling and fund liquidation are justified as fund managers look to join in the stock market rally. Safe haven buying seems to favour the German Bunds and the US treasuries. Precious metal failed to rally time and time again despite the supportive remark by Fed officials.

The selloff in precious metal continues as long as the key word “taper QE” is mentioned by any Fed officials. Yesterday we just witnessed more money printing programme from Bank of Japan. We also expect the next governor of BOE to increase the existing QE programme. Meanwhile, the ECB is mulling over plans to cut interest rate further to boost the economy that increasingly face contraction. The money printing programme is now officially a race between the US, Europe, UK and Japan. Japan claims to use it to fight deflation while the other 3 are using it to prop their ailing economy that is heavily in debt. We are unable to envisage the consequences should the Fed reduce their QE programme and argued that QE is here to stay even after reaching the unemployment rate of 6.5%.

Looking further ahead, the financial crisis in Europe is far from over. Slovenia and the Netherlands may soon step in to replace the previous “Bailout Ballerina” - Cyprus. The US sequester could add negative pressure on up and coming economic data while the UK continue to struggle with its current deficit and possible triple dip recession. The political tension in the Middle East may have subsided but it could spell more trouble in the weeks ahead. Meanwhile, Mr. Kim should be treated more seriously ever since he brandished his nuclear capability.

Gold Technical
We expect more price volatility on gold as the bears remain in control. In addition, today’s nonfarm payrolls data will determine the next direction that gold will take. We advise our readers to stay on the side line as it is hard to catch a falling knife.
Previous low made at $ 1522.48 will be the final support before triggering fresh stop loss order. Should that be given, gold will free fall before finding any new support.
Gold continue to look weak technically and the recent sell off create various pockets of resistance. It dipped to a low of $ 1540.18 before bouncing higher but met resistance at $ 1554 after a worse than expected US jobless claim numbers.

The selling pressure from the gold back ETF has not abated and the lack of physical buying did not help support the price. As per our last commentary, we suspect that dip buyers are on the prowl while the physical buyers are waiting for lower prices to place their long positions. 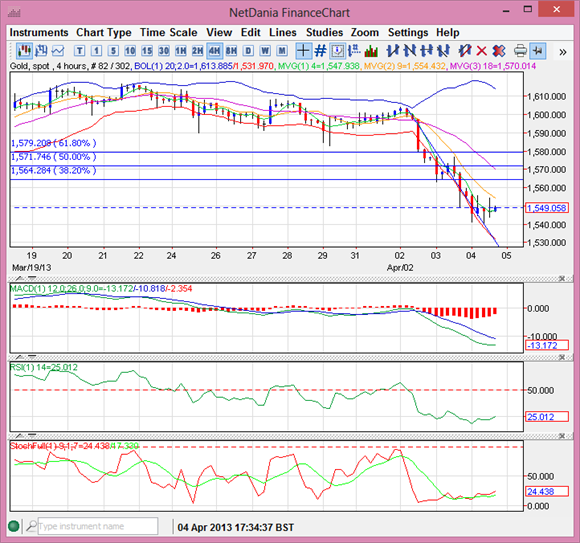 Technically, silver continue to show weakness as it trades at the lower of the Bollinger band. The MACD remains in the negative zone and crossed lower which further indicate selling pressure. Meanwhile, the RSI has drop to a severe oversold area with the stochastic fast line continue to the downside. Silver took out several support levels and eventually found some buying interest at $ 26.64 but the lack of follow up buying will indicate more selling. We continue to be bearish and look to sell on any rallies unless it can break above $ 27.75.

We have made in our previous commentary that we will not get carried away due to a dominant US dollar which continues to cap any rallies and we have on many occasion repeat caution of any silver trade. Unless silver can trade above $ 29.50, we will remain bearish and felt that there is too much volatility (and non-volatility) to take a position. 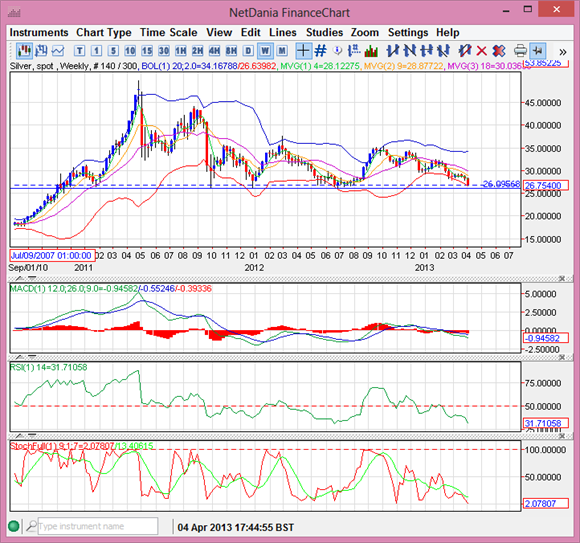 Trade Recommendation Results - March 2013
Over the month of March, we have recommended several short and long positions both on gold and silver. Below is the result of our recommendation as well as the stop loss triggered. We hope our readers enjoyed reading our daily bullion round up and benefit from our trade recommendation.