Gold and silver break higher during Asian trading times due to strong buying interest. Bargain hunters went in for some dip buying and took advantage of the current prices. In addition, we have other positive bullion news such as Japan PM Mr Abe electing the next BOJ candidate who may share his dovish view. Traders see this potential marriage as a way forward for more quantitative easing. Meanwhile, European trading hours indicate more buying presence due to Italy election vote that cast some fear and uncertainty trade over the fragile EU economy.

The aftermath of the falling prices in gold and silver is very well documented in several reports which we plan to summarise here. All the reports pointed to one similarity that caused the current prices. According to the CFTC data, fund managers increased their short bets to reach record levels. The last three weeks, funds played the major role in the 8 a.m. selling of gold futures and they increased their bet which caused some weak hands to exit the market. One of the report states hedge funds are in the short bubble of 66,000 gold future contracts (6.6 million ounces or $ 10 billion).

The other argument is how gold is overly dependent on what the Fed will do next. There have been on-going talks to taper the QE programme due to the better economic data. Bullion prices tied with how accommodative the US central banks are. The yellow metal seems to ignore that other central banks are doing additional QEs and pumping more liquidity into the financial market. For instance, it failed to react positively to a lower than expected repayment to the ECB’s second LTRO.

The hedge funds have had some success to push prices down and made other market participant to follow. However, central banks are supporting the market and physical buying of gold is still rampant. After the Lunar New Year, buying interest soared in SGE and according to the IMF data Russia and Turkey central banks added more gold in January. Physical bars are getting scarcer as supply constraint might further support a higher gold price. We therefore argued that the gold bull rally is set to continue despite the current pause to flush out weak hands.

Short Term:
Prices managed to break higher with gold tested $ 1598.00 but resistance remained strong as we draw closer to the psychological level of $ 1600.00. Several other resistances include the 38.2% retracement line at $ 1604.70 followed by the 50% retracement which could be an important resistance at $ 1620.00. Short term chart signal strong buying interest but we remain cautious on a possible dead cat bounce. Traders are cautious as we enter closer to Mr Bernanke testimony to congress as well as the up and coming sequester.

Medium Term:
As per our previous commentary, gold prices managed to retrace higher after overextending the sell-off. We are not surprise to see some short covering from the bears at this level but they remain to be in firm control. The daily chart RSI remains in oversold grounds while the MACD suggest further consolidation. Failure to hold $ 1550 will be bearish we expect strong buying interest should that happen. 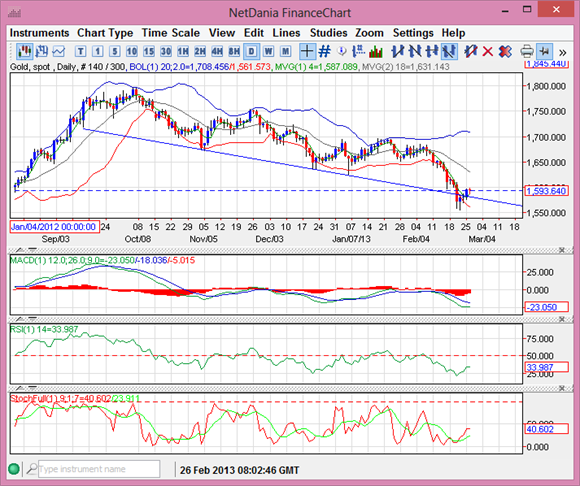 Short Term:
Prices traded above the 4, 9 and 18 days MA which suggest strong buying interest and remains to be well supported. The Bollinger band is converging and for a change, prices are following the upper band. The MACD has cross higher and the stochastic is at a strong buying zone. We are not entirely convinced that this could be a strong upside rally until several other resistances are taken out.

Medium Term:
The outlook on silver remains grey as the white metal muddle through different price moving factors. Technically, it follows gold movement and act as a cheaper alternative safe haven investment. The MACD is still rolling at the lower end but attempting to push higher alongside a positive crossover in the stochastic. We will cautiously watch the price development on silver before taking further action. 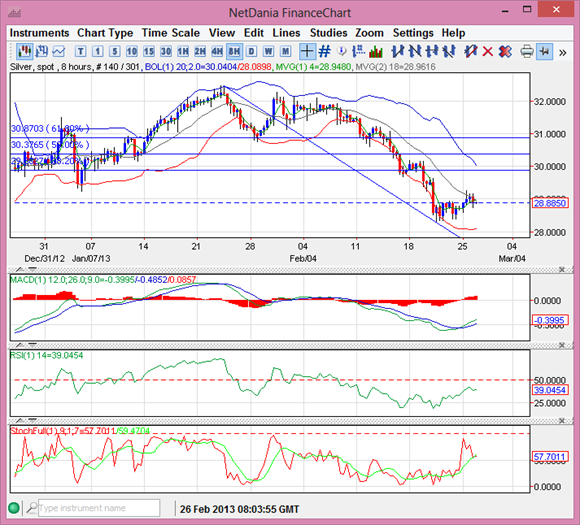