The latest World Gold Council report plays down the likelihood that the US economic improvement will lead to interest rate hikes and bring an end to quantitative easing programme. “WGC report dismisses such suggestions as nothing more than optimism, as numerous structural issues still exist” they added.

Bullion prices remain at the mercy of the bear market and vulnerable to more downside pressure in the short term. However, we do wish to raise several key facts that may contribute to the change on gold prices in the next few weeks. First is the low volume that pushed gold price lower as it break below the triangle pattern. Given the low volume, traders felt that the move lower is a warning sign of a faltering bear market. Secondly, the perception that economic recovery is underway remains fragile. The current movement of money out of safe haven assets and lack of interest in gold and silver may haunt investors if the optimism in the recovery proves false.

Japan economy refused to exit its longstanding triple dip recession. Its economy shrank for a third straight quarter, leaving it mired in recession with weak export demand. The on-going island dispute with China contributes to the weaker export. However, the BOJ outgoing governor suggested that better times are ahead. Depreciation in the JPY should give its export a boost, coupled with improved sentiment in the US and Europe that may increase their import demand.

Meanwhile, Eurozone GDP report painted a grimmer picture as the French economy shrank and put it in recessions earlier in the year. German GDP is no better at -0.6% compared to the expectation of -0.5%. Does this suggest that Germany is starting to feel the pain from the periphery neighbouring countries? Leading market analysts felt that more good numbers are set to come and surprisingly play down the negative numbers. On the back of the negative data, traders started dumping the single currency and bought into the safety of the US dollar.

Short Term:
Gold continued to slide lower after a better jobless claim data from the US. Technically, gold remained weak and vulnerable to more selling pressure as traders are expecting for a retest of $ 1625 which was the January’s low. It is also trading below the 200 DMA and below its 50 DMA at $ 1646.43. Should the yellow metal fail to hold on to $ 1625 then we could revisit the psychological level of $ 1600.

Medium Term:
With the MACD rolling deeper in the negative zone and stochastic breaking south, prices will remain under selling pressure. Gold is now trading at the bottom of the Bollinger band for a few days now and it seems to suggest weakness will continue to prevail. The market will get more volatile as we get closer to the crucial support line. Cautious trading is advised and we only look to place a short sell at $ 1625 with a tight stop loss of $ 1628. We are still sceptical on this bearish move due to the low volume being traded. 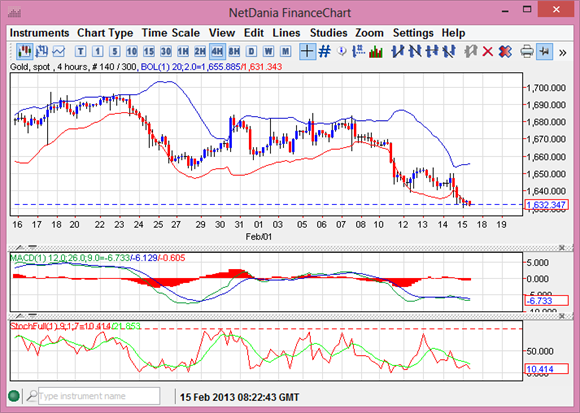 Short Term:
Silver has broken below previous support of $ 30.65 and slide lower to reach $ 30.24. Any attempted rallies that touched the top of the Bollinger band lead to heavy selling which satisfy our cautious commentary on a possible fake rally - and any rallies must be sold. We are bearish on silver and technically, it will need to find support above $ 30.00 or we could revisit $ 29.25 which was the January low.

Medium Term:
On the daily chart, it shows that silver has completed the retracement from January high which touched $ 32.49. The MACD is pointing lower with continuous selling pressure as the stochastic confirms more consolidation to be expected. Silver is now trading below its 200 DMA which may not bode well in the next few days unless a solid support can be found. Look to short the market on any rebound for now otherwise, staying on the side line could be a better option. 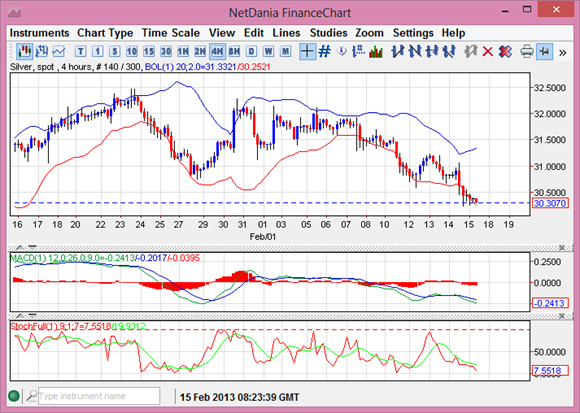