It is difficult to see any positive related news about gold outlook in the next few weeks or months ahead. 9 out of 10 articles pointed to a bleak picture on gold development, as if all hopes of a revival are gone. We have stories ranging from George Soros scaling back his investment, hedge funds curtailing their investment in the yellow metal in favour of equities as well as the constant views that the Fed will stop their QE programme before the end of 2013. Given such negative review, does it mean that long term investors should reconsider and re-enter the oversold market?

What is clear to us at the moment is that bullion prices could remain in this consolidation mode for a little while. Technically, it is not showing any positive sign of a recovery rally. We could range trade between the psychological levels at $1600 to $ 1620.

We cannot ignore the fact that currency devaluation is still the major topic to be discussed in this commentary. The Japanese yen was given the green light to continue its easing programme after the G20 meeting. Today, Mr Abe ramped up pressure on the BOJ to act faster to achieve the 2% inflation target. He warned that if it fails to achieve the target, he may consider reining in the institution’s independence. His remark sent a strong message of further yen weakness.

Other countries such as Argentina and Venezuela have devalued their currencies due to a rampant hyperinflation. Norway government has also decided to join in as it is ready to cut interest rates further to counter the stronger Norwegian Krone that interfere with their inflation target.

Short Term:
After the selling climaxed, gold prices put up a mild recovery rally from the low of $ 1598 to $ 1618 which is the 38.2% fib resistance level. It suggests that there are buying interests at the psychological level at $ 1600.00 but technically, it remains vulnerable to more selling pressure. In the short term, prices may consolidate further to test for supports and range trade between $ 1600.00 and $ 1632.00 (61.8% fib level).

Medium Term:
The current price is still treading along the bottom end of the Bollinger band which suggests a continuous selling pressure. The daily chart MACD is still rolling negatively while the stochastic is stuck in the oversold area. We remain bearish as long as it is trading below its 10 DMA ($ 1640.00). 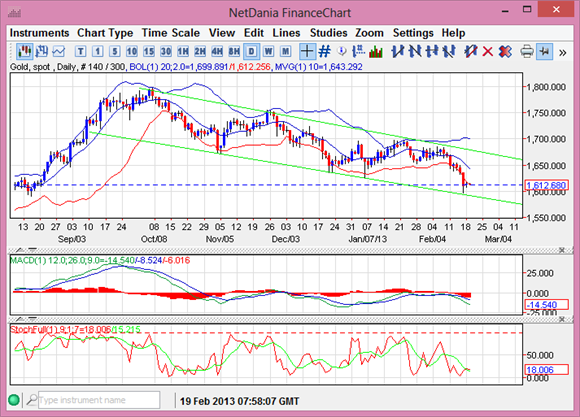 Short Term:
The Bollinger bands are converging which may suggest a potential outbreak. Prices remain in consolidation mode after breaking lower and the selling pressure has not abated as prices trade below the 10 DMA ($ 29.96). The RSI is at the oversold level of 35.16 and in the meantime, shorting any rallies could be the better choice. The stochastic continue to roll in the lower zone and have not cross upward yet.

Medium Term: Some bargain hunting appears in silver after it bounced back from its support at $ 29.63. The next support at $ 29.25 could be pivotal and if that is given then it could open to lower numbers. The daily chart MACD remains in the negative zone and the stochastic has not cross higher. We remain bearish on silver for now. 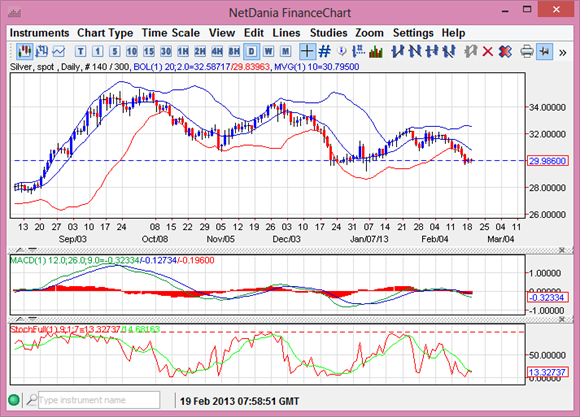