The prevailing market condition seems to suggest that the gold market is rigged. We are simply an outsider, analysing whether such headline is justified. There is no single doubt that the gold bugs cried foul as the short sellers continue to pummel the price below the pivotal support at $ 1525 and eventually take it as low as $ 1325 in 2 trading days. It was an extraordinary event in the making that left many investment bankers, investors and the media dumbfounded. They were left confused, amazed and perplexed but at the same time speechless when asked what caused the huge drop. Most replied what was already known - Cyprus government gold sales, FOMC meeting minutes that suggest a possible taper on QE end of this year and last but not least the prediction and downgrade reports by investment bankers.

By carefully re analysing 7 months before the drop, we found several interesting signals that were suggesting the big sell off are coming. After the last rally at $ 1800 (October), gold look set to retrace lower and that could well be the game changer as prices once again failed to pass higher. It as a steady decline and the trend continues albeit at a slower selling speed. Then news broke out that George Soros has sold most of his ETFs holding in (December) which added some pressure on the gold market. The FOMC meeting minutes (January & April) were not helping the overall situation when they introduced the word “tapering”. Constant steady outflow of ETFs investment as well as the buoyant stock market sapped away investor’s confidence on the yellow metal. The battle hardened bulls thought that there are available reserve troops (demand) and support will be available at the pivotal area of $ 1525. It was a big disappointment and by far a miscalculated confidence that market will eventually rally from the previous low. In fact, the chart below suggests that gold was in already in a descending triangle pattern.

The reason to sell and sell hard is further exacerbated given that gold has created a triple top and a correction is justified. The technical indicators are there to suggest that this market will be in correction mode and it may take months or years to rebuild investors’ confidence in the gold market to retake higher prices. We do not think that the rebound will be significant enough to change our stance. We are experiencing a corrected bull market and a low of $ 1200 or $ 1100 is possible in the next few months. Those who are still holding gold are looking to exit their trade soon and this does not bode well at all for those holding paper gold. 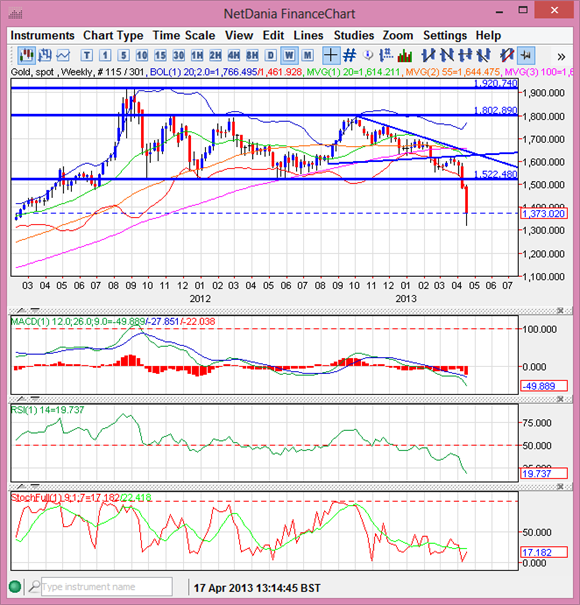 During the early Asian trading hours, gold was in consolidation mode and locked in a range trading session between $ 1366 to $ 1387 areas. Late European trading hours, gold managed to trade higher despite the strong US dollar index. Equities sell off seems to spark a small raly in gold. In general gold managed to retain its gain and traded with higher high and lower high - which indicate that it is in an upward trend. We expect the market to continue upwards albeit slowly as it tried to erode the resistance at 1404 and will attempt to rebound to the 31.8% retracement at $ 1424 area.

A break above $ 1396 is bullish in the short term and gold will try to attack 1404. However, the 15 minute chart shows a potential pullback to retest support $1377 to $ 1372 area. We will only short the market if it drops below 1360.
Current market sentiment suggests a rebound could be expected but will meet strong resistance at $ 1424 (31.8%) and $ 1465 (50%) retracement line. Should prices break higher, short sellers will look to add on their position. We felt that the market will resume lower after this rebound to test the previous low before embarking on re building the Bull Run. 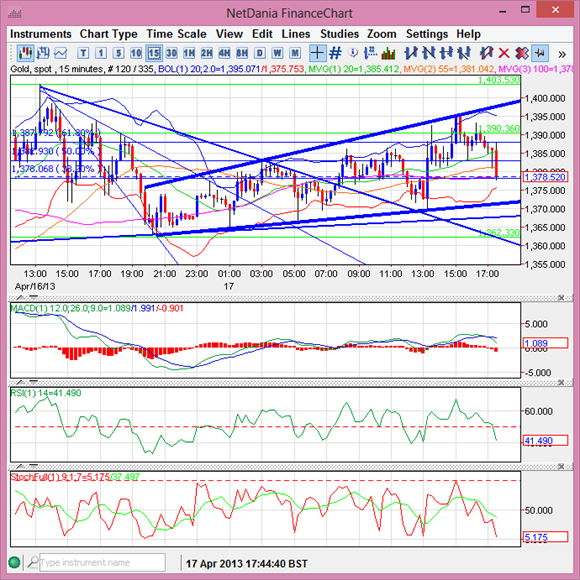 Yesterday, silver put up another round of range trading and retested support at $ 22.87 before having another attempt to break the resistance at $ 24.03. It did not manage and stop short at $ 23.74 which is the new resistance for now. Short term technical does not paint a strong silver market. Instead, any rallies are prone to be sold. The 1 hourly charts shows that it is trading in the tight Bollinger band while prices traded above the 20 DMA. Meanwhile, the daily chart continues to indicate that selling pressure will persists and we have not reach a bottom yet.

The prospect of the white metal to rally seems unlikely but a bottom is due. It is impossible to suggest where the bottom will be but staying on the side-line is a better option. 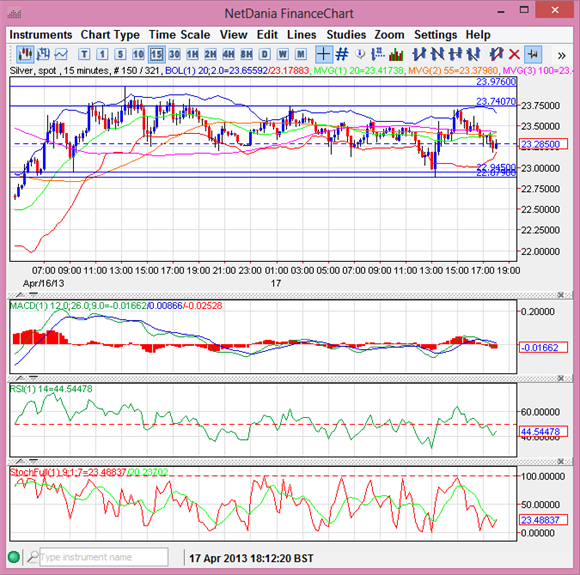