After a strong bull run in the last 12 years, it is not surprising to see gold in its current consolidation phase. It reached an all-time high of $ 1921 before retracing back and tested support at the low of $ 1525. The last few attempts to overcome the all-time high were mired by a capped price at $ 1800. It has been trading in this rectangle pattern (range trading of $ 1800 to $ 1525) for the last 2 years. Given the recent weakness, it is wise to technically question whether this consolidation phase is coming to an end or are we facing a possible trend reversal?

Bank analysts are arguing that prices have bottomed and it is a good time to buy long with a target range of $ 1700 to $ 1850. Barclay maintains its Q1 gold price forecast at $ 1710, and argued that price correction should spur interest. Meanwhile, a resource analyst said “It’s very cheap” referring to gold and added that “The US has still got to deal with budgetary and debt constraints, they’re not going to go away.” Our main worry is that gold prices are not reacting positively to any potential catalysts and may remain muted with a slight bias of further weakness.

We picked up an interesting comment from Mr Draghi that paints a clear indication of downplaying the effect of “currency war”. Draghi said “I find really excessive any language referring to currency wars and urge all parties to exercise very, very strong verbal discipline. I think the less we talk about this the better”. He also denied that the Euro was too strong. Mr. Draghi viewed a gradual recovery in the Eurozone and the German Zew economic sentiment confirmed that with a stronger numbers at 48.0 against 35.0 in February. However, Euro sceptics argued that the recovery in expectations” may already have overshot if hard data disappoint in the coming weeks.”

Meanwhile, Japan Finance Minister Mr Aso rebuked the possibility of changing the Bank of Japan independence - the remark made over the weekend by Mr Abe. Mr Aso said “We are not thinking about a law change at the moment”. Yen was stronger after Mr Aso comment to reassure BOJ independence is safe for now.

President Obama stepped up pressure on Congress to avert the automatic budget cuts of $ 1.2 trillion dollars and asked for a temporary, smaller package that provides more time for negotiations. Looks like Mr Obama and Congress will have to head back to the negotiation table again to avert the spending cuts that might cause more harm to the economy than good.

Short Term:
Gold retested for support at the psychological level of $ 1600 after giving back all its early gain. Demand from China and India remained high but not sufficient to stop the selling pressure. Recent analysis deemed the gold price is oversold in the short term which might suggest some short covering. Bargain hunters may be lurking to place a long bet on gold should prices hold at or below $ 1600.00 and target $ 1630.00.

Medium Term:
The current price situation remains bearish and gold is still treading along the downtrend channel. We remain bearish as long as it is trading below its 10 DMA ($ 1640.00) and remain stuck in this downtrend pattern. On the short term bullish note, prices at the bottom downtrend line may suggest that it needs to complete the channel line by attempting a rally to meet the resistance at $ 1650 area (see chart). 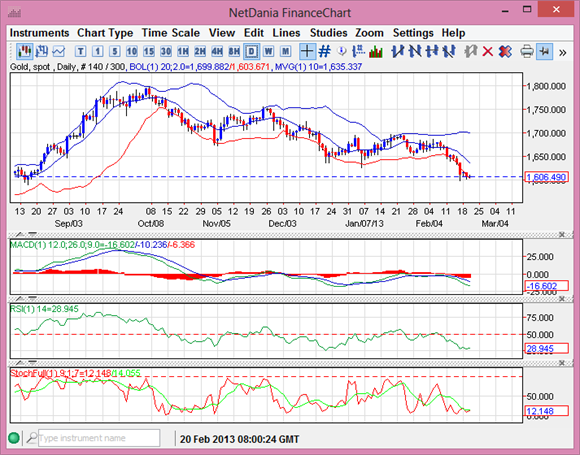 Short Term:
Silver break below the support level at $ 29.60 and headed lower to retest January low of $ 29.25 area. Our recommendation to short the market works and gained us 30 pips in the profit. In the short term, the MACD is still rolling in the negative zone which suggests the selling momentum still hold.

Medium Term:
In our last commentary, we mentioned the importance of the next support level at $ 29.25 which was breach yesterday. The signal currently suggests more downside pressure on silver as it remain technically weak. We remain bearish on silver for now.