Gold is facing an identity crisis that could prove detrimental in the long run development of its 12 year rally. The general mood remains bearish as any rallies are sold and the large speculators increased their short position. Risk reward ratio to hold the yellow metal has increased since equities look much more favourable to provide a return. Long term investors are holding on their gold as a wealth protection against currency debasement. Their commitment remains steadfast and in line with Central Banks around the world that are buying more physical gold bars.

However, the short term traders (or speculators) are suffering bouts of lower prices ever since gold rally to $ 1800 in October 2012. Analysts warned that “decoding gold’s drivers at any given moment is risky business”. The short term risk to gold remains to be the US dollar rally. Others claimed the fading currency risk such as a break up in the Eurozone has subsided and recent economic data implied optimism that lessened the need for safe haven assets. Technically, gold is in a downward trajectory and fundamentally suffered a lack of positive catalysts to support its holding appeal.
The FOMC meeting minute displayed confusion as some member argued to vary the pace of asset purchases while others voiced concern about ending easing too soon. Gold tumbled further as low as $ 1565 with the dollar strength.

US stocks pushed higher, sending Dow Jones Industrial Average and the S&P 500 to their best levels in more than 5 years. The upside momentum was kept alive after a big rally in European shares after a better than expected business sentiment. As we enter to the end of the week and close to the end of month, the biggest worry remains on the Italian election poll that may affect overall market confidence. In addition, the US has got it automatic “sequester” budget cut looming on March 1st.

Meanwhile in Asia, China’s Foreign Direct Investment (FDI) extended a downward trend and down to 7.3%. The domestic housing market remains overheated and government officials are looking at ways to further curb the strong demand that pushed prices higher. South Korea voiced their concern of the falling Yen and suggests the need to devalue the Korean won as well. The falling yen did not help as Japanese import resulted in a higher trade deficit of $ 17.4 billion. One could argue that import inflation will soon be at work as it will affect domestic consumption where they will have to pay more for imported goods.

Short Term:
Our short term call on a possible reversal was misjudged as prices continue to weaken. Gold took out its previous February low of $ 1598 and the selling continued to a new low of $ 1578. The current price is now trading at the lower end of the Bollinger band and below all of the moving averages which indicate a strong downward trend that may continue. However, we cannot ignore the opportunity to buy gold should a potential correction on the oversold market exist in the near term.

Medium Term:
We apologised if the following get repetitive but we remain bearish on the technical front since prices treading at the lower end of the Bollinger band. MACD remains in the negative zone with the RSI indicating an oversold market. The last time an RSI is oversold was when the yellow metal test a low of $ 1535 area. 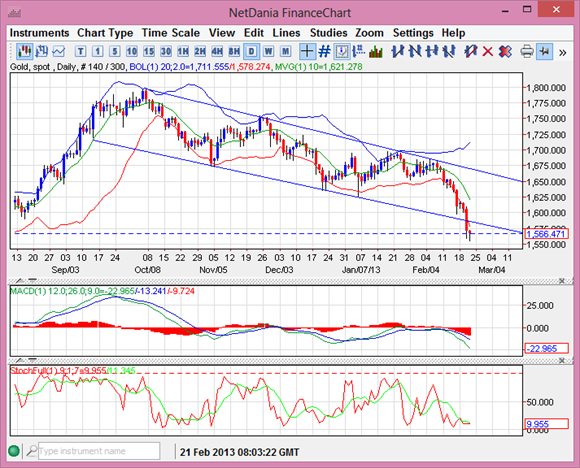 Short Term:
Silver continues to trade in the downtrend channel and breaking below its previous low of $ 29.25 and reached a new low at $ 28.45. The first set of resistance lies on $ 29.92 area and then $ 30.37 which we fear a new bout of sell in the rally will take effect. The Bollinger band has move further apart with prices trading below the 10 DMA.

Medium Term:
The bears remain in control and there is no sign of slowing down in the selling zone. Technically, the stochastic is still rolling lower and only a cross to the upside will indicate a potential rebound on prices. At the moment, watch out for any potential dip buying opportunity. 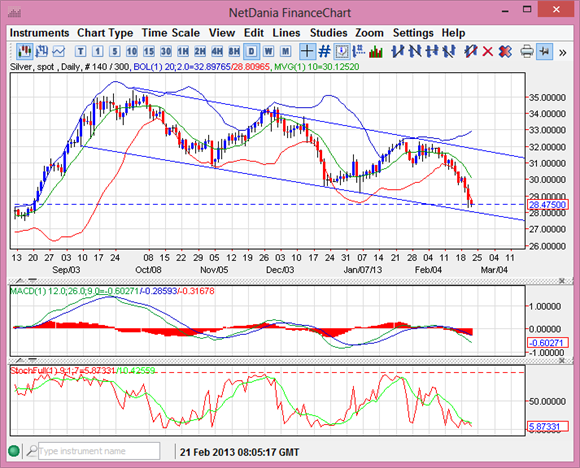