“Who is selling? And why?” asked several (frustrated) traders. One of the biggest reasons is the record exit from SPDR gold fund investors who are fleeing for a better return elsewhere. We apologised but have to recycle the usual reasons that we played countless times. Market perception promoted by the media and the Fed, argued that equities are still undervalued the general economic sentiment are poised to a stronger road of recovery. We beg to differ and disagree but when the herds of investors (weak hands investors) are running around like headless chicken, it is to no surprise that they start to abandon ship first.

Our argument is based on a long term perspective that gold will continue to be an inflation hedge and wealth protector in times of currency devaluation. Ownership of physical gold is on the increase as general public mistrust banks and governments’ ability to manage wealth. Developing economy citizens bought more gold as their wealth rises with a possible threat of inflation - such as China. Meanwhile, a “struggling” developed country faced with no growth prospect and huge debt ceiling also create an environment for its citizen to buy gold as a protection. Overall demand for the yellow metal does exist and the fundamental reasons remain strong to own it.

In order to answer the above question of who is selling? Our answer is the same with Credit Suisse analyst “we don’t know. But we only know this is a broad based exit of some investors from the GLD market”. It is easy to explain why prices are falling but to understand the real motive behind the coordinated and timely selling is another matter. US economy is barely expanding and we are due to learn more about the economic fate of the Eurozone if Italy election did not prove favourable.

Short Term:
After a strong rebound from the February low of $ 1554.00, gold tested $ 1620 resistance level and broke lower after a bear flag rally. It failed to find support at the 38.2% retracement line at $ 1595. Instead, it broke lower taking out the 50% and 61.8% with it. Our medium term prediction did warn that we remain neutral bearish due to a potential bear flag after the rebound. Prices did break higher and overextended itself above the upper Bollinger band. Stochastic remain weak and the MACD still rolling lower. It will need to consolidate further before another attempt to break higher.

Medium Term:
Even though the stochastic moved higher showing some buying interest, we remain worried as the MACD line has not cross positively. RSI remains at the oversold area and prices trading below the 4 and 9 DMA line which could add more selling pressure. A retest of key support will be crucial for gold in the next few weeks which may determine its next direction. 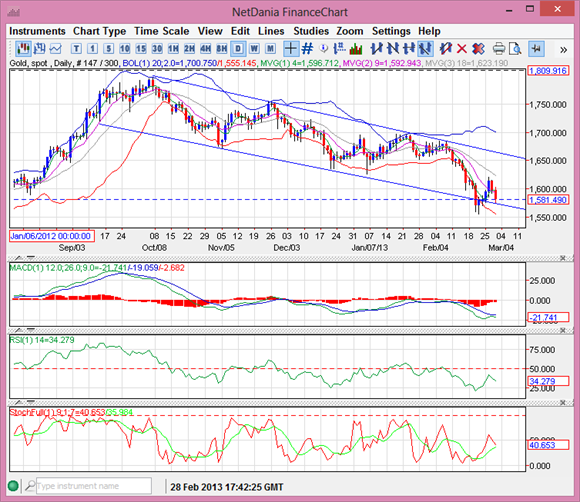 Short Term:
With the MACD crossing back into the negative zone, we see more consolidation at this area between $ 28.45 and $ 28.75. Yesterday selling look overextended on the hourly chart as it breaks below the lower Bollinger band. In the short term, we fear the weakness will continue for a little longer but buying interest will revive it support is found above $ 28.50.

Medium Term:
We would like to remain cautious on Silver as it lacks the bullish momentum to move higher. Silver has bounced off the lower downtrend line but the MACD has not converged higher. In addition, the stochastic has crossed lower again after the initial rally. We remain neutral bearish for now. 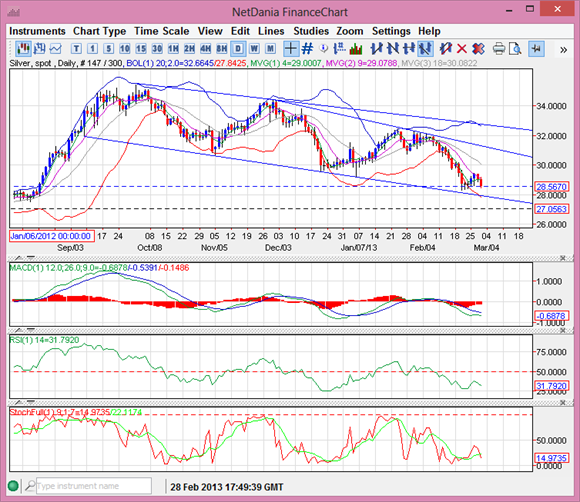