Despite a strong increase in US dollar index, bullion prices reacted positively and made headways to find support before crawling higher. Traders remain cautious as short term gains could easily lose ground to quick profit taking if there are any good economic data. Gold is still trading within a tight range where the bulls and the bears have no total control. It is also reacting rather like a safe haven assets. But currently it is not so appealing to hedge fund managers who are thinking to reduce their gold holdings as they see a receding economic crisis. Not everyone agreed as they argued that gold remain a strong inflation hedge tools.

Economic Round up
Asian shares take its cues from their Western counter-parts as they ended the day in negative territories. Spanish corruption allegations hit market confidence and caused a rise in Spanish bond yield. It was not so different with Italy fiasco that also undermines its credibility. Euro took a tumble which benefited a strong recovery on the US dollar index. The head of Bank of Mexico warned of ‘perfect storm’ for global economy that is addicted to loose monetary policy. He feared that financial markets are being overly optimistic which could lead to mispricing in some asset classes.

Short Term:
This morning gold traded in a tight range of $ 1675 and weakened to $ 1670 area. The uncertainty in the Eurozone helped short term gold prices to move slightly higher. However, we remain neutral and look to trade according to the direction of the market. Gold price remains stuck as prices coiled into a tighter ascending wedge pattern. Technically, it is setup to rise but bouts of profit taking capped upside movement.

Medium Term: Technically, a breakout on gold prices may come sooner rather than later. A break higher to $ 1685 gives a bullish signal to retest previous high of $ 1697. Should that fail, the bears will be in total control to push it back down to $ 1625. The MACD is rolling flat but stochastic showing more bullish sentiment. It is a matter of time before prices breakout from this potentially bullish pennant. 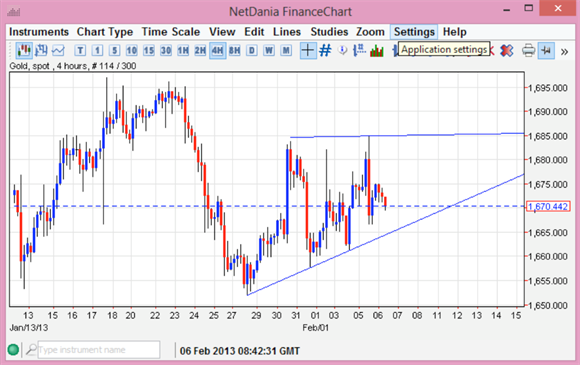 Short Term:
Silver traded confusingly as traders bought the market to go higher and sell it hard after the short rally - back down to where it all started. Having failed to break lower at $ 31.66, silver prices did a reversal to test yesterday high of $32.12 but failed to get anywhere close to erode the overhead resistance at $ 32.47. It is another day and another setback in the bull camp as prices are still very volatile.

Medium Term: The positive news on silver is that it is still trading above the long term downtrend line at $ 31.66 area followed by other support at $ 31.23 and $ 31.00. In addition, it is trading in an ascending triangle pattern. The stochastic have turned which suggest renewed buying pressure. We maintained our neutral bullish stance on silver and look to target $ 32.47 and then the 2012 - 2013 resistance line at $ 33.29. 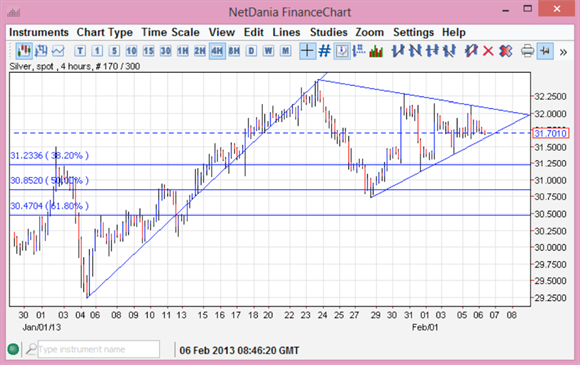